The Alliance War Guide is out!

Currently, only four Heroes have a Military trait – Captain America, Captain Marvel, War Machine and Winter Soldier. Captain America is a Hero who is very important for raids and I believe that the majority of players have him maximized in their roster already. Captain Marvel came with the last update and I already explained how great she is. Captain Marvel’s shards will be obtainable by completing Milestones which will be available every day now instead of every 3 days. By completing “Higher Roller” (solo) “Spend Gold” (daily), “Save the World” (solo) and “Spend Campaign Energy” (3 days) you will be able to farm those shards and open this amazing Hero. It remains to be seen how much shards will be available by each Milestone but I expect that the number of shards will be similar with rewards for War Machine in the Milestone we already did for Valentine’s day. I strongly suggest that you do whatever is necessary to open Captain Marvel not only because of the Alliance War – she is a Top Tier Hero and the Kree team is nothing without her (I am talking about Blitz and the Arena). War Machine is another Military Hero and we already knew that he will be important for Alliance War. I hope that FoxNext will provide us with additional means for collecting his shards because people who can’t afford to purchase his shards from offers will not be able to have him above 5 stars and that is not enough honestly. War Machine proved that he can deliver an enormous amount of damage and a 10% boost for Alliance War will be invaluable especially if he is in a team with Captain America, Iron Man and Captain Marvel. Winter Soldier is the only Villain Hero with the Military trait and I must admit that his usefulness in the Alliance War is a mystery to me. Placing him in the same team with other Military Heroes will automatically decrease damage output of War Machine and I am not sure if one more turn of Binary for Captain Marvel can replace War Machine’s damage that we will lose if we use Winter Soldier. I understand that FoxNext wants to encourage players to use Heroes like Winter Soldier, Thor or Hulk but if they want to force us to use Winter Soldier in the Alliance War, the benefits he will provide must be amazing. It’s too early to jump to conclusions since we don’t know yet what advantages will Military Heroes bring in Alliance War but to be honest I don’t have high expectations regarding Winter Soldier. 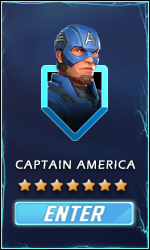 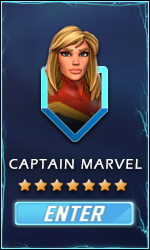 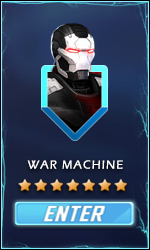 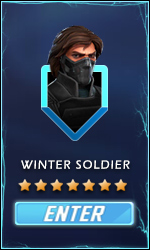 I am very excited about the Alliance War and I hope that we will not wait long. However, FoxNext taught me to keep my optimism for my self and not to expect much if I want to avoid disappointments. I suggest that you do the same.

In the end, I must mention mighty Widowmaker from legendary “Legion of Cabal”. Widowmaker finished Fear of Darkness and he is a first player who opened Ultron. I must congratulate him on this incredible achievement and I want to thank him for 100 shards we will get from him (as a reward FoxNext will present us with 100 shards for Hero of Widowmaker’s choosing). Yesterday we learned that the Hero of Widowmaker’s choosing is Captain Marvel and that FoxNext will present us her shard through the monthly Calendar. It is not what we expected but it is definitely a better solution than Widowmaker chosen Hulk as it was rumored. By choosing Captain Marvel, Widowmaker enabled the entire MSF community to have one of the most powerful heroes in the game and proved to be a great person. Once again, BRAVO Widowmaker, you deserved everything you get and more!