Finding a shooter game which suits perfectly for mobile is quite a rare sight. Despite the plethora of shooting games overflowing the game stores, there are just a few of them which really feel like they belong to mobile. FRAG Pro Shooter is one of those games. It’s a free multiplayer team-based third-person shooter, with some interesting innovations and variety which make the gaming experience more unique. This game is not grim, gritty nor it strives to be realistic, but bright, clear and colorful. In that manner, it reminds on Overwatch or Fortnite, but by game mechanics, it stands out enough to make a difference.

The main goal of this game is to eliminate the opponent’s base which is on the other end of a two-lane battlefield. Damaging the opponent’s base removes tickets, which are increasing according to the account level until the enemy base remains without any tickets, which is the main condition for victory. Every time someone gets killed, the ticket number goes down too, and you will often find yourself in the situation that your victory depends on the loss of both enemy bases, not only player kills. There are two teams out of five players, but you can control only one of them, and you will recognize which one your enemy is controlling by their screen name highlighted above the character. 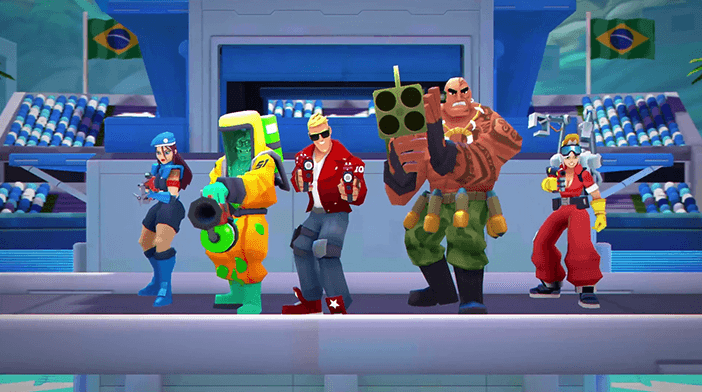 At the beginning of the match, you randomly appear as one of the 5 champions you select for your team. There are four points of interest on the map, two on your side and two on the enemy’s side. Once the middle base is destroyed the shields go down on all four bases, making them open for attack. There is a nice strategy of selecting your defense positions at the start of a match and pointing defensive players to spawn to that position. Then, after you get over the midfield, you just need to select a base to attack. The principle is similar to Clash Royale when you try to take out an opponent.

That is not the only similarity with Clash Royale, because character and account progression is almost replicated, with the basic core loop with opening chests, a chance for gems and player cards. when you get a hero’s initial player card you can put it into the main roster, and after each victory, you will receive a loot box which might be silver, which is common rarity, rare orange or epic purple. The characters are also quite diverse, having their own country and origin story, but also their own unique look and powers. They are also divided by rarity, with a common, rare and epic category. 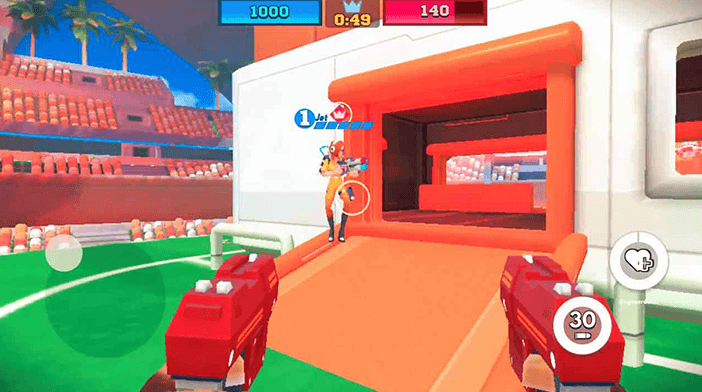 There are five positions for hero classes to fit in, Attack, Center, Camp, Defense, and Wild. It would seem that the most common set is a balance Beam with two attack one center and two defense players, but that ordinary approach usually doesn’t give the best results. It is very advisable to experiment with the wildest combinations and see which one will turn out the best.

Similar to other shooting games on mobile FRAG decided to throughout the fire button, so whenever you have your reticle on the enemy, you will fire automatically until you empty your magazine, then you reload. There is a manual reload button too but it doesn’t work so well.

The best aspect of this game is visual aesthetics. Simply said, FRAG looks amazing and it runs in the stable frame rate while looking smooth and sharp. Although arena maps are identical, the bay structure of the map is very balanced, with multiple covers, back doors and choke points where most of the team fights happen.

This is the game with the huge potential for competitive scene, and we can see it growing significantly thanks to the clear design, variety of great characters and stunning visuals. Despite the frequent comparations with Clash Royale, this game is doing more than well on its own.

This is the game with the huge potential for competitive scene, and we can see it growing significantly thanks to the clear design, variety of great characters and stunning visuals. Despite the frequent comparations with Clash Royale, this game is doing more than well on its own.