Before describing Gacha Life, allow us to explain the very term “gacha” and what does it mean. Bluntly translated, gacha is a capsule toy which gives out random items. It’s a game mechanic very similar to loot boxes, in terms that it requires from players to spend money in order to buy them. Most of the games that employ gacha mechanics are free to play mobile titles, in which players spend virtual currency, usually obtained from a machine. The Gacha game model, which is Gacha Life itself began to be widely used in the early 2010s, faring particularly well in Japan. Almost all of the highest-grossing mobile games in Japan use it, and it has become an integral part of the Japanese mobile game culture. Outside Japan, this game type also started to gain popularity. Examples of Gacha games are Final Fantasy: Brave Exvius, Fire Emblem Heroes, Puzzle & Dragons, Dragon Collection, Granblue Fantasy, Girls’ Frontline, Monster Strike, Fate/Grand Order, and Kingdom Hearts Union X. The model of gacha has been compared to that of collectible trading card games as well as gambling.

Now, to depict this game to you, imagine anime version of Sims, with the accent on customization of the characters. You can choose from hundreds of dresses, shirts, hairstyles, weapons, and much more items in order to dress your character in the latest anime fashion. The full version of the game upgraded the number of the slots to 20, so you can let your imagination run wild. You can even customize the personal look of your avatar by changing your hairstyle, eyes, mouth and more. The full version of the game also brought new items, new poses, and other features that have never been seen before.

There are two main modes in Gacha Life. The first is studio mode, in which you basically create a story by entering custom text for your characters and choosing from many different poses and backgrounds. If you remember Bitstrips from some 5 years ago, this mode is quite similar. In the feature called Skit Maker, you can easily combine multiple scenes to create sketches. 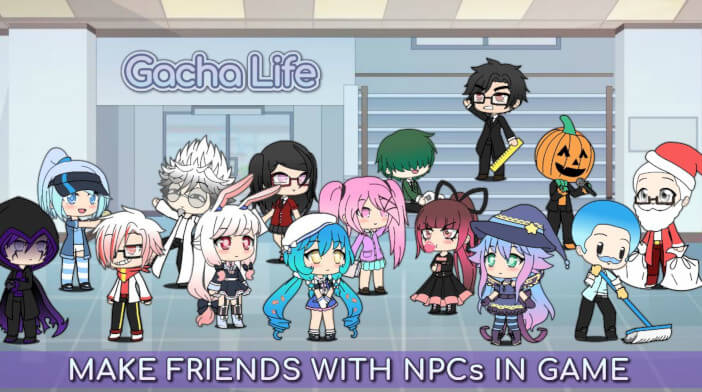 The second main mode is life mode. In this mode, you can explore various areas with your characters, such as the town, school, and more. During that, you can discover new NPCs and chat with them to learn more about their lives. The best thing is that this mode is offline and no connection is required to play it. Gacha Life also has in-game mini-games, 8 of them, such as Duck & Dodge or Phantom’s Remix. The main source of the items though is gacha lottery.

In this game, there are numerous characters, cards, or other items that players can obtain, and most of them are only obtainable via the “gacha” mechanism. The “gacha” mechanism would allow players to “spin” the gacha using a specific amount of in-game currency, which would give the player a randomized character or item. Sometimes, this gacha would be limited, like in a way that those characters and items can only be obtained within a specific event or a time frame. Because some of these items or characters would be given less chance to appear, typically players would need to spin the gacha many times before they can get the most desired outcome. 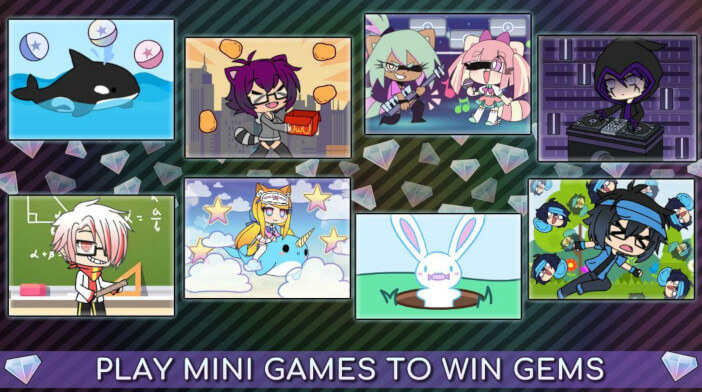 In these games, gacha could be essential for players to make progress in the game. Players may be given free or discounted gachas, but have to pay to get more. These games may also feature different tiers of gacha pulls, which give different sets of rewards

From the technical aspect, Gacha Life is not completely flawless, since it may lag on all devices and devices with 4K screens. If you experience a lag over time it’s advisable to save and restart the game. Finally, the in-app purchase might not work for Android 6.0 devices and newer, or rooted devices.

With all said this is still a pretty good game for the people who like to spend their time customizing their characters and interacting with other people. Those unbeknownst with this type of games might have some quality time discovering the possibilities of Gacha Life.

We made Gacha Life Tips and Tricks to help our fans at the start of their adventure.

With all said this is still a pretty good game for the people who like to spend their time customizing their characters and interacting with other people. Those unbeknownst with this type of games might have some quality time discovering the possibilities of Gacha Life.