Becoming a Prison Empire Tycoon is the name of the game, literally. Remember Shawshank Redemption? Well, here you are not just an accountant, you are the owner and chief of the “box” as your role is to invest, manage, and reap the profits of the biz. Contrary to what you may think, reforming people and running a prison is a lucrative business, and you’re about to find out just how lucrative if you want to try this game out. This is an in-depth review followed by some tips in the second part of the page. 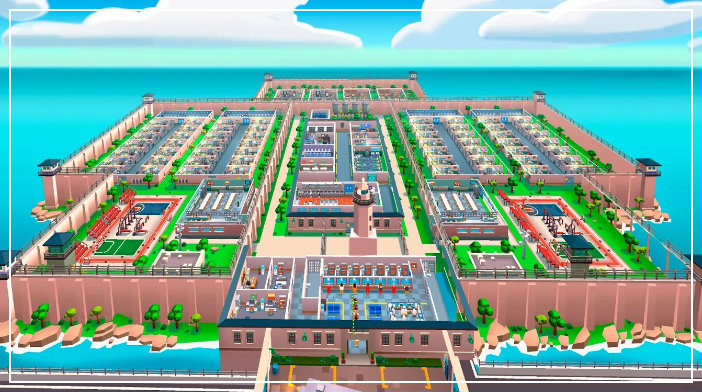 Prison Empire Tycoon is developed and published by Codigames, an indie studio based in Valencia, Spain. The game does slightly resemble a 2005 PC game titled Prison Tycoon, where the goal was also to run a prison, but the mechanics and player roles were quite different. Codigames is a studio that focuses on the “Tycoon” part and ads it into all of its titles. They also have several other games out, like Hotel Empire Tycoon, Idle Fitness Gym Tycoon, Idle Theme Park Tycoon, Idle Supermarket Tycoon, and so on… Just from the titles, you can deduct that the games involve running other businesses, like a Gym in Idle Fitness Gym Tycoon.

Codigames are focused on social mobile games and the studio is comprised of veteran gamers, putting the “by gamers for gamers” slogan to their portfolio. They’ve dished it out for both Android and iOS. On Google Play, Prison Empire Tycoon Android is very well received, having 4.3 average star score out of almost 200k votes as of this writing. The iOS version of the game has an even better 4.4-star score and it is #2 in strategy.

This game is being advertised as “the best prison management game”, and it surely is probably the only one of its kind on mobile… 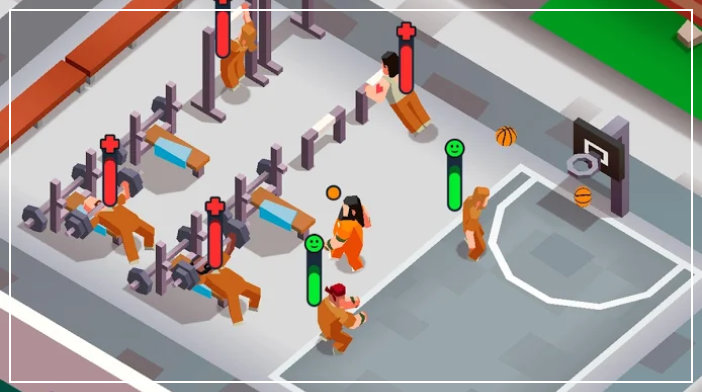 This game is being advertised as “the best prison management game”, and it surely is probably the only one of its kind on mobile. It achieves its atmosphere with some cool and witty features (things you can only expect in prison), while it also plays really well as an idle strategy. Something is alluring about managing a prison, building cells, hiring security guards, upgrading toilets in cells, and stuff like that.

This game is classified as an idle strategy, but it is at its foundation a city builder… 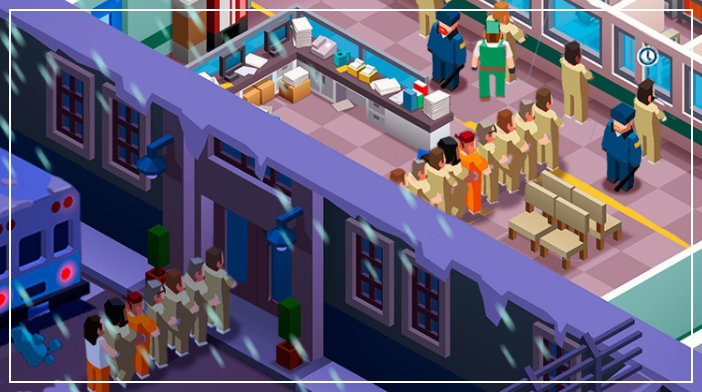 This game is classified as an idle strategy, but it is at its foundation a city builder. But, instead of a city, you have your prison to develop. You view everything from a top-down portrait perspective and you can see through the roof of buildings and cells. The prisoners, guards, and other staff in your prison all behave and move on their own, which is where the game earns the “idle” in its title. But, you must make everything else happen, which includes building, upgrading, responding, etc…

You start in “Malamadre Prison”, which is a low-security correctional institution located in a tropical climate and with access to a few resources. However, in later stages of the game, you can also advance to manage the “Williamson Federal Prison” (medium security), “Vladistenko Penitentiary” (high security), “Alcantraz Federal Penitentiary” (maximum security), and other prisons, all with their own workings and features.

The name of the game is making money and this is precisely what you are doing while reforming convicts of course. Each prisoner you take in provides a profit, which the state subsidies you with. You also get profits from various other sources, but you must also pay wages to your staff, including guards, genitors, cooks, and builders. You must also invest your capital in expanding your prison, updating the electricity and water network, building and improving cells, shower areas, and so on.

Also, you must worry about the Overall Stress Level of both the Prisoners and the Employees. Prisoners have six needs you need to balance out, which include: hunger, hygiene, entertainment, health, rest, and their security risk level. For your Employees, you need to worry that you are not under or overstaffed, so you need to either hire and fire employees depending on the state of your prison. There are many more features to play around with, but this is the gist of it.

This game achieves everything it aims for with simple and minimalistic 3D models, flat textures, 3D environment, and cartoonish style of the overall presentation… 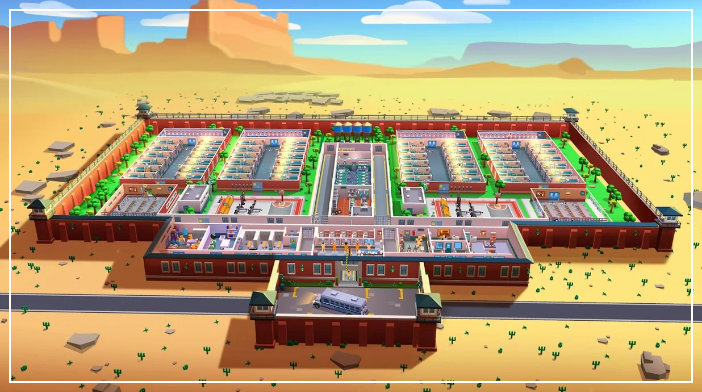 This is a nice looking mobile game. It doesn’t feature flashy graphics, high-res textures, advanced lighting, and detailed animations. But, it achieves everything it aims for with simple and minimalistic 3D models, flat textures, 3D environment, and cartoonish style of the overall presentation. The atmosphere is further enhanced by the blues soundtrack, which switches between several instrumental songs all the time. Blues and prisons, going well together since Johnny Cash’s Folson Prison Blues, recorded in 1953.

Thanks to its minimalistic visual approach, this game is very easy on the devices… 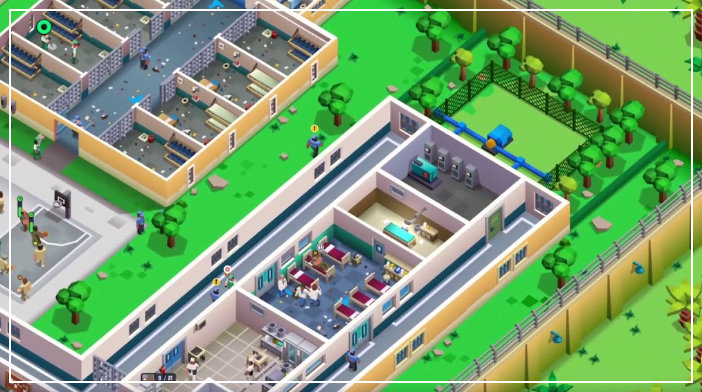 Thanks to its minimalistic visual approach, it is very easy on the devices. It has a clear UI, with comprehensive visual cues, and descriptive gameplay elements. Come to think of it, this is perhaps one of the top games in terms of how gameplay features are described and explained in-game. Everything is clear, accessible, and you learn on the go. The game is playable on virtually all sorts of Smartphones build since 2017 and on. You can play it with anything from 2GB of RAM, with any GPU apparently. It needs Android 5.0 and up, or iOS 10.0 and up. 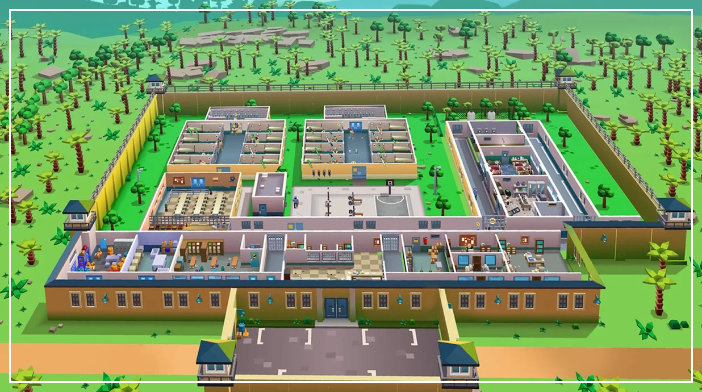 Cash is the main in-game currency with gems being the premium. Every basic gameplay feature and mechanic will cost and yield cash, with gems only being used to speed up your gameplay. However, you get Gems very slow, down to the point that you can’t afford anything significant that costs Gems. But, cash is easy to get, by making a profit and watching ads, which can also multiply your profit for a time. Since this is an idle game, you earn your profits passively, even while offline, but things are expensive and you will progress slowly if you are a free-to-play player. Top-ups and packs range from $0.99 to $29.99 and they either provide gems or remove ads, of which there are a bit too much in my opinion, but they do bring your profits. 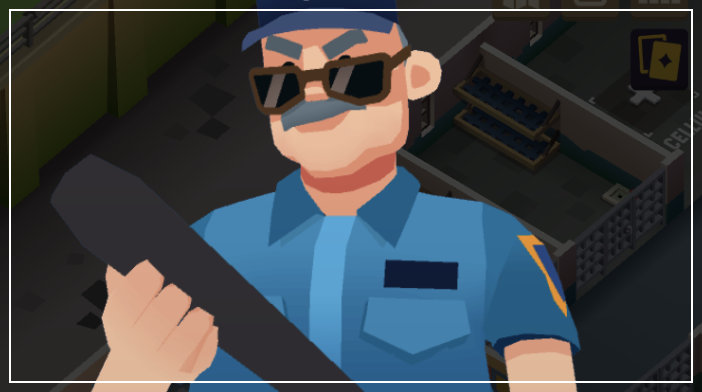 This indie idle strategy game did not make it to #2 strategy on the iTunes App Store for nothing. It is interesting, no two words about it. It will definitely make you stop and play a little while. If this blend of city builder idle strategy is for you, you will like it for its particular humor and gameplay flow. It even has some cards and it slightly reminds of Sims the way you balance your prisoners’ needs. But, too many ads and slow progress might turn some people away from it. In any case, Prison Empire Tycoon is a very interesting concept and a cool game.

This indie idle strategy game did not make it to #2 strategy on the iTunes App Store for nothing... 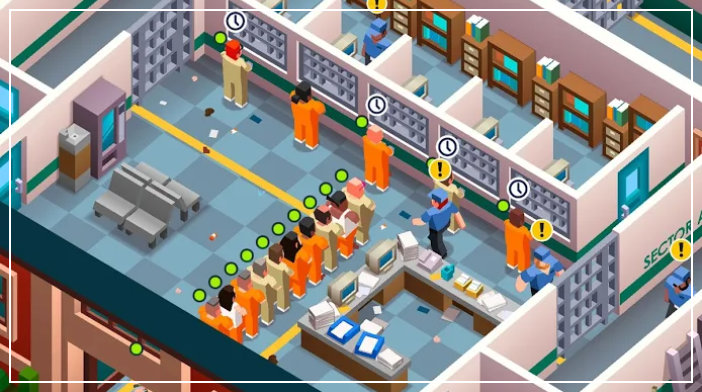 While this game is quite new, the community is only forming. However, thanks to the very comprehensive in-game instructions and visual cues, there are very little tips and guides needed. Players mostly find their way throughout doing what they want. Frequently asked questions about this mobile game are, therefore, virtually nonexistent, and everything revolves around helping people earn more in-game cash. Well, we have done some digging, and here are some theories…

How to make money?

As mentioned, Money is your basic in-game currency in this game and it is the only thing you need if you are bent on the free-to-play method. However, it may and will take you more time to turn a profit and everything you build, improve, and any attempt will take a long way around. This is a standard monetization policy any mobile game has, although Prison Empire Tycoon does offer a lot of leisure opportunities with rewards from ads. There are too many ads in my opinion and they tend to interrupt the flow of the game frequently, but since you will be needing “infinite” sources of Money, you might as well use them.

Make good use of video ads.

So, the first tip would be to make the best out of ads, especially for multiplying your profit to x2 or even x3 if you are lucky. The good thing about this game is it’s not just idle because your staff and prisoners move on their own, it’s idle because your business continues even when your game is turned off. Ads are featured as a monetary investment from various sources in the game, where you answer the call, but actually, you watch an ad video. It may reward a lot of money in the later stages of the game.

How to quadruple your profit?

But, once you turn the it off, you will continue to earn, and when you log in again, you will be given a recount of your Economic Balance together with a chance to duplicate it if you watch a video ad (and triplicate it for 100 gems, which I do not recommend ever). Always make use of this duplicate opportunity and if you’ve already increased production by x2, this will mean you will have x4 on your total profits, while your expenses remain the same.

Other than using ads for money infusion, you should just strive to invest in making your prisoners happy. This means investing in all the things that improve their needs. Also, you should keep your guard count just barely enough to keep your prisoners in line, but if you have some dangerous prisoners, it is sometimes worth it to even hire more guards and have a negative gross for a brief time, just until they are reformed. Other than that, at later stages of the game, in other levels i.e. different prisons, you will have more opportunities for earning money with different resources available.

This indie idle strategy game did not make it to #2 strategy on the iTunes App Store for nothing...