Gwent pre-order for iOS just opened as CD Project Red ports The Witcher Card Game to the iTunes App Store in October. The Polish celebrated studio is doing the publishing for their own projects quite successfully and have thus far shown a tremendous initiative with their upcoming, highly anticipated Cyberpunk 2077. In the meantime, they are keeping busy with upgrading and expanding their existing featured games, and after bringing The Witcher 3: Wild Hunt video game to Nintendo Switch, they are bringing the card game to iOS.

Gwent: The Witcher Card Game is currently available for PC, PS4, and Xbox One, and has been since 2018. The game is playable in The Witcher 3: Wild Hunt game and most importantly, it is derived from the novels by which the entire franchise is based on. The card game of the same name is featured and well-known to all readers of The Witcher novel series, written by Andrzej Sapkowski.

The game is a turn-based free-to-play card game where two opponents clash in a card that takes three rounds in total. Each of the players must play a card per turn from their deck that has at least 25 cards in it, and each deck also belongs to a certain faction, each with its own play style. Every one of these card factions has their “leader” cards with individual abilities. 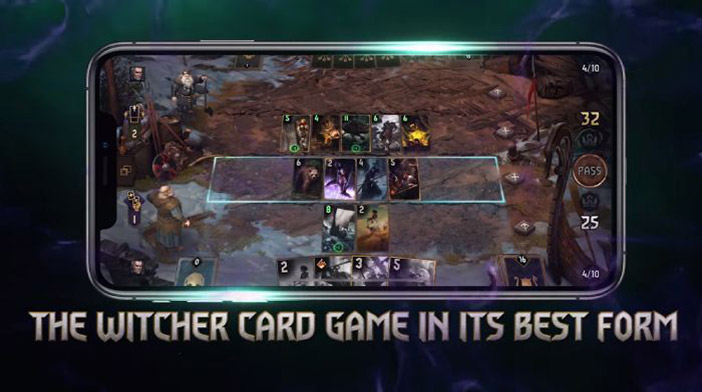 Unlike Hearthstone and some similar card games, Gwent doesn’t use mana as a resource and everything is based solely on card advantage and skill. The game also features constantly updated new content and different modes, like single-player, arena mode, etc… Furthermore, the current version of the game is available for cross play between PC, and console versions, which will include the mobile iOS version as well. However, cross-play between consoles is not supported and thus won’t be available between consoles and mobile. Only PC & consoles or PC & mobile versions are compatible for cross-play.

Gwent: The Witcher Card Game mobile iOS version release date is set for October 29, and the title is announced to come with certain juicy features. For the most powerful iOS devices, this game will have a build-in 4K feature, cross-play, and a reimagined set of controls adapted for the touchscreen. Gwent challenger tournament will also be held on September 14 and 15, with a $100K prize pool and CD Project has promised more info about the iOS version during the live stream on their Twitch channel.