We’ve finally arrived. The train took several hours to get to Hogsmeade. During that time, I’ve found out a lot about Rowan’s favorite things. Particularly books, to be precise. He told me all about Miranda Goshawk and the Standard Book of Spells. Apparently, he did some reading beforehand. He wanted to be as prepared as possible since he aims to become a Head Boy. My mum was pretty strict about teaching me anything even remotely tied to spells.

“You will learn it once you are ready,” she used to say. At least she let me read the books about Magical Beasts and The Tales of Beedle the Bard. I love those. I still remember her attempts to make me read the History Books. I didn’t really find those nearly as entertaining as the ones about Beasts or Magical Tales.

“Their purpose isn’t to entertain, but to educate you,” she used to say. I guess she did have a point, but I was simply too stubborn to admit she’s right. Rowan was so passionately trying to explain why she was correct once I told him about it. I had to listen to his explanations, which were mostly quotes from various History Books, for nearly an hour and a half. He definitely has a strong passion for History, to say the least.

It was dark outside when we stepped out of the train. Hogsmeade village looked so peaceful. I wish I had the chance to look around.

“First-Years, follow me!” A loud voice interrupted my thoughts. I turned around and noticed one huge man standing at the station, waving at us to go after him. He had very long, unkempt hair and beard. Despite this and the fact that his voice and stature gave out quite the presence, there was something soothing about him, something that inspired trust, I can’t really describe it with words, to be honest.

“That’s the Groundskeeper of Hogwarts,” Rowan whispered as we were moving toward the Black Lake. “He is a half-giant…or so they say…” This was one information that Rowan wasn’t so sure about. And judging by his “awfully entertaining” History Lessons, I was fairly positive that he loved the hard facts and certainty.

The moonlight was shining upon the lake water as we went across. It was really a beautiful sight.

“I’ve heard that there are all sorts of creatures inside the lake,” Rowan said, “at least I am quite certain there are some Merpeople in there, but I am not sure about the Giant Squid…”

“The Giant what?” I curiously asked. Could such a creature really exist in the Great Lake, I wondered.

“I’ve heard some tales, but I cannot say if one truly delves within the depths of the Lake…” He replied.

I leaned a bit over the side of the boat and looked into the water. Sadly, I couldn’t see anything below the surface. After all, it was pretty dark. The only light sources were the boat lanterns and the dim moonlight that was shining upon the water. It made the lake look especially magical.

“Dylan, look!” Rowan pulled me by my sleeve and pointed toward the castle. I took my eyes off the water and gazed upon the Hogwarts Castle. It stood there, imposingly, and with each passing moment, I could notice more of its greatness. The lights from various sections of the castle made it look quite alive. Centuries of history, knowledge, and magic radiated from it, which left me in total awe for a while.

“It’s…magnificent!” I said, still quite shocked.

Dad used to show me some pictures of it occasionally, while he was telling me various stories, but those were nothing in comparison to the real thing.

“Did you know that Hogwarts Castle was built almost ten centuries ago?” Rowan asked, “It is seven-story high and it has a hundred and forty-two staircases!”

He then continued to talk about Historical Facts until we finally arrived. The Groundskeeper escorted us to the Chamber of Reception where we were greeted by one of the professors. She was a person of high stature and wore emerald green robes and a pointy hat, often mentioned in various tales about witches. She had a calm, serious look on her face and she watched us as we entered the chamber. I had a feeling she was evaluating us, trying to see what sorts of newcomers Hogwarts received this year.

“Welcome to Hogwarts,” she addressed us with a kind tone. “Soon enough, you’ll follow me into the Great Hall, where you’ll join the rest of the students. However, before that, each one of you will be sorted into one of the Houses. These are Gryffindor, Hufflepuff, Ravenclaw, and Slytherin. While you are here, your House will be something like your family within Hogwarts. Any time you demonstrate an extraordinary feat, you’ll earn points for your House. Any time you break the rules, you will lose points. At the end of the year, the House with the most points will be awarded the House Cup. Proceed after me into the Great Hall. The sorting ceremony is about to begin.”

We followed the professor and entered the Great Hall through the huge, double doors, large enough for a giant to pass through. I looked around as I stepped inside the Hall. It was truly magnificent! There was an enchanted night sky at the ceiling, and the hundreds of candles were floating around, illuminating the Hall. Four long tables were filled with students, one for each of the houses. Near the end was a table for the teachers and the staff. I had a feeling that hundreds of eyes were gazing upon me, watching my every step. I felt so anxious and frightened. The Professor stopped near a stool upon which a dusty old pointy hat was placed. Once everyone arrived, the hat began moving and the words started coming out of it.

“It was nearly a millennium ago,
When I was created,
To ease all kinds of sorting problems,
That were heavily debated.
For each of my four creators
Wanted students who share their views,
And they all agreed to make me
So, they won’t have to choose.
Since that moment, I sat upon
Every student’s head
To the right house, with no error,
Each of them was led.
Gryffindors were all the ones
Who were brave and daring,
In Hufflepuff belonged those
Who were kind and caring.
Ravenclaw took all the students
With the brightest mind,
And Slytherin wanted those
Of ambitious kind.
So, don’t worry when you get here
And you hear my voice,
You’ll be quick to realize
That I’ve made the right choice.”

Shortly after, the Professor continued, “Once I call out your name, you will step forward. I’ll place the Sorting Hat on your head and you will be sorted into your houses.”

She then started calling out students, one by one, in alphabetical order, apparently. I guess I will be sorted before Rowan. Hopefully, we’ll end up in the same House.

It wasn’t long until I was finally called out. I reluctantly stepped forward, afraid of being placed in the wrong House. But then again, the Sorting Hat was never wrong. I assume it will place me correctly…

I slowly sat on the stool awaiting the decision anxiously.

“Hmm… very interesting.” The Sorting Hat said, “I haven’t seen one like this in a long time.”

“And what house are you hoping for, hm?” 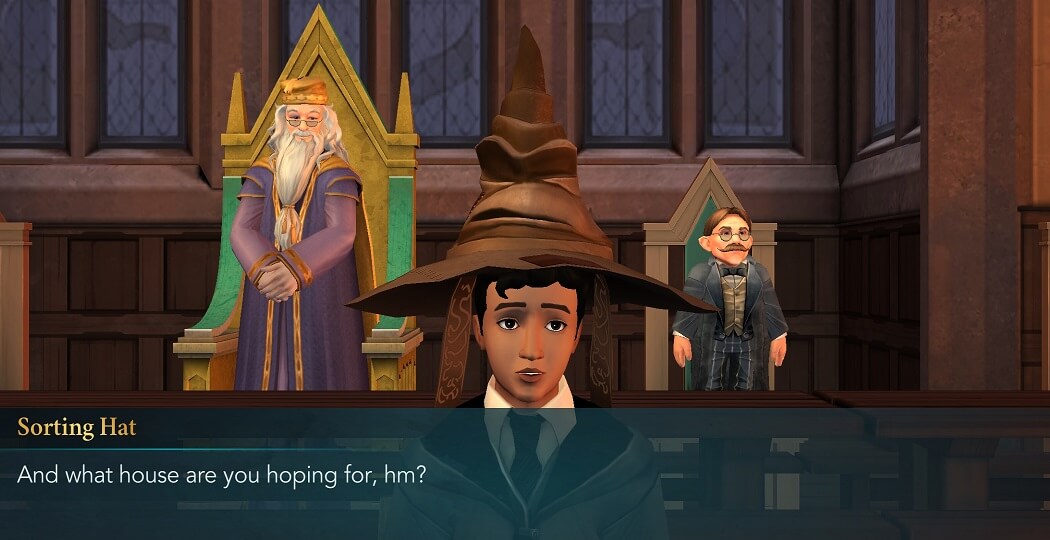 I never actually thought about that. To be fair, I don’t mind being placed in any of the Houses. Mum always used to say that many of the great Witches and Wizards came out of each of the Houses, so I didn’t really have a favorite one.

“A Gryffindor!” I thought to myself as I was going to the table of my House. “I can’t believe I am really at Hogwarts!” 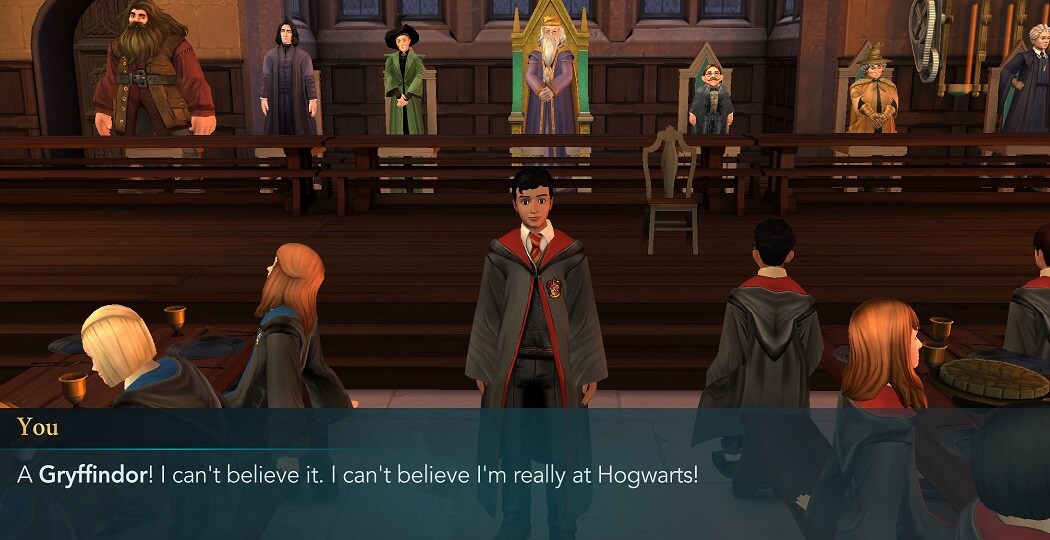 “A Gryffindor, eh? But you clearly have a mind suited for a Ravenclaw… Hmm… Well then, I’ll put you in…”

Rowan was anxiously awaiting the decision. Apparently, he badly wanted to be in the same house as me.

Rowan stood up, filled with joy as he approached the table.

“Dylan! We’re both Gryffindors!” He said excitedly. “I can’t believe it!”

We watched as many other students got sorted until finally, all of them were placed in their Houses. Once the sorting ceremony was done, the Headmaster approached the podium to make an announcement.

“Welcome! Welcome to another year at Hogwarts,” he addressed everyone with a warm, kind tone.

“The past few years have seen a great weight lifted from our world,” he continued. “The Boy Who Lived, Harry Potter, is safe. Years from now, young Harry will be old enough to attend Hogwarts…”

He then paused for a brief moment before resuming, “But for now, it’s your turn! Remember, while you are at Hogwarts, your triumphs will earn you House Points, while any rule-breaking will lose House Points. At the end of the year, the house with the most points is awarded the House Cup, a great honor. I hope each of you will be a credit to your house.” 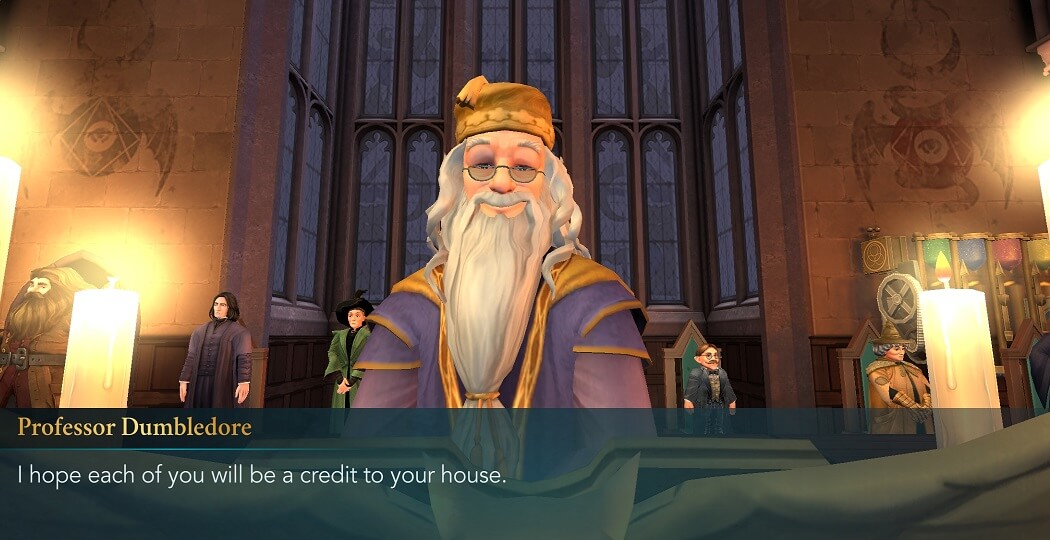 Afterward, we enjoyed the Welcoming Feast. All sorts of delicious food magically appeared on the table. And everything was prepared so nicely, it was really a sight to behold. Once we were done eating, the head of each house addressed its students.

“The feast has ended. Gryffindors, please proceed to the Gryffindor Common Room,” Professor McGonagall said. Shortly after that, we were instructed to follow our Prefect. 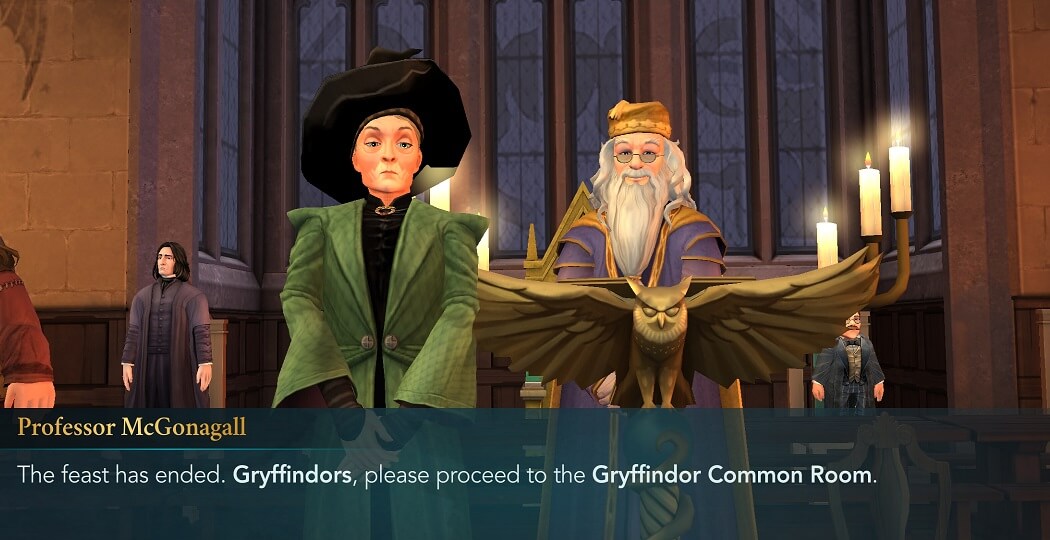 As I was leaving the Great Hall, I was curious about what kinds of adventures await me at Hogwarts. Will I be able to find out what happened to Jacob? Will I discover if those Cursed Vaults he was after are real, or just some product of his imagination? I guess the time will tell…”

What to (not) play