Hello everyone, it’s time for the Fourth and the Final Part of Become a Prefect Adventure Walkthrough for Harry Potter: Hogwarts Mystery. In the previous part, you had tests in both the Herbology and the Potions. Thankfully, you managed to pass both of those and prove that you are capable of becoming a Prefect.
There are only a few more obstacles to pass before you reach your goal. For the next task, hit the GO button and proceed to the Artefact Room. 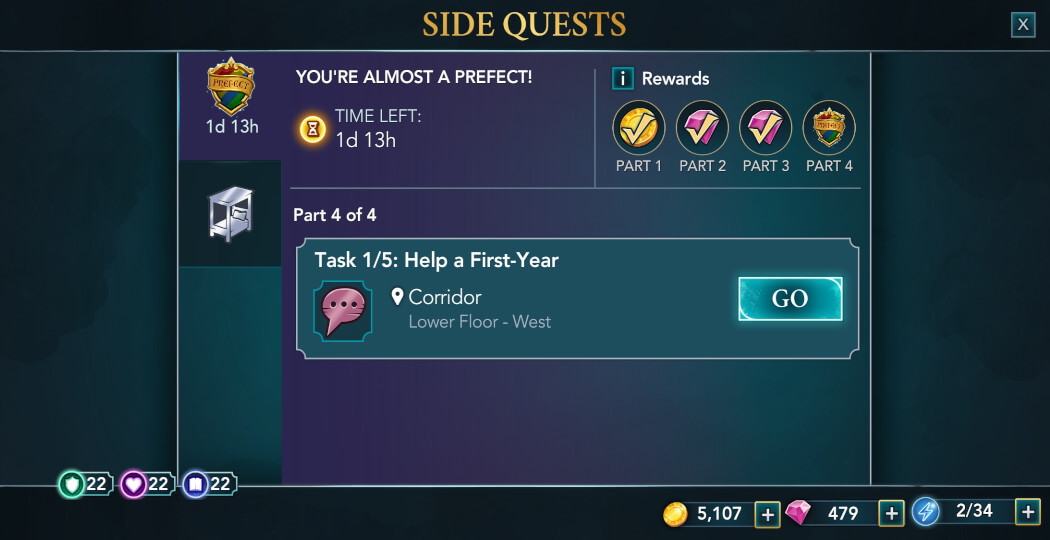 You’ll find the First-Year student there, waiting for you. Apparently, he is just as cowardly as Ben, perhaps even more so. 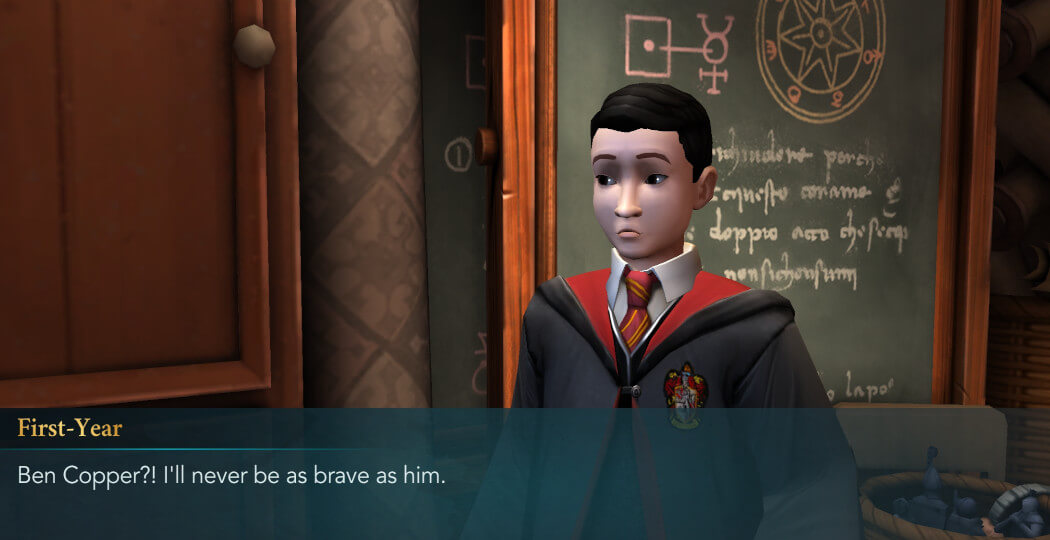 The reason he invited you is that he needs help understanding all of the rules at Hogwarts. He is hoping that you could help him understand it. You can respond in two different ways. 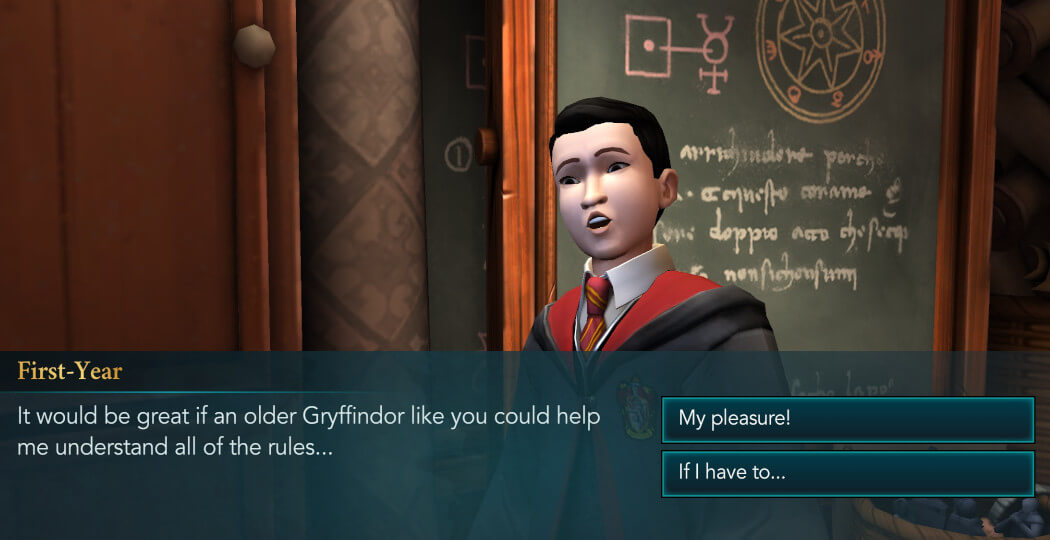 It is very important to select the first option and help the First-Year understand everything. This choice will have an impact later on, which is why choosing the first answer is recommended. Helping him is a task which requires you to earn five stars within three hours. Since all of the stars are required, you should avoid starting this if your energy bar is very low. 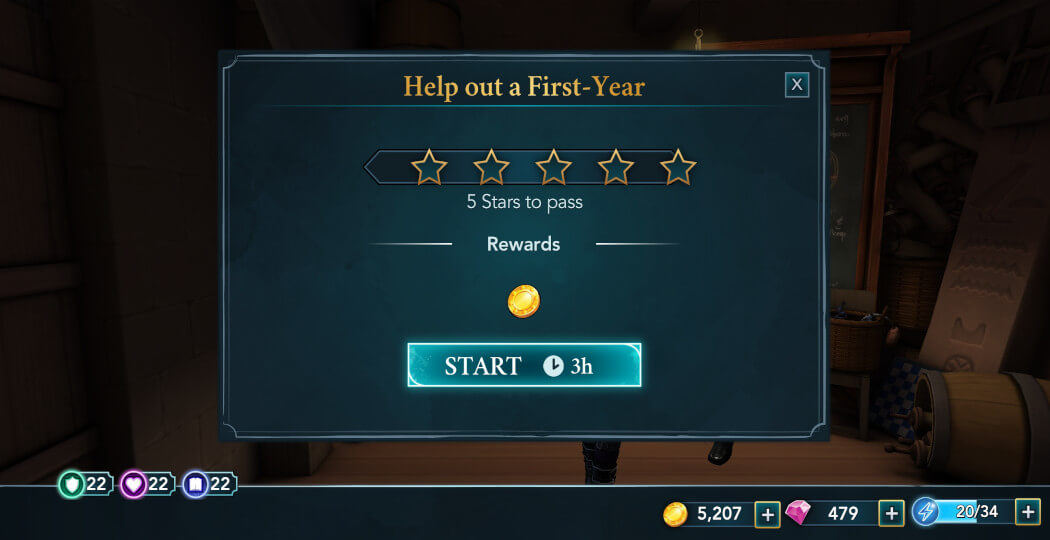 Pretty much all of the actions you can do here cost two energy points. Because of this, you might need a bit more energy than usual to finish the task. 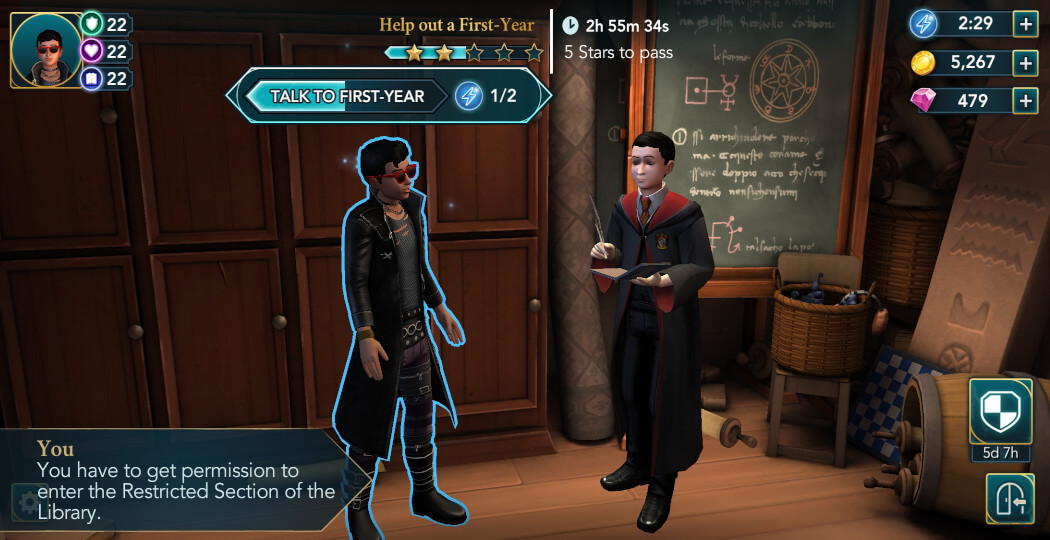 Once you’re done, you should go to the Corridor to meet your Head of House. 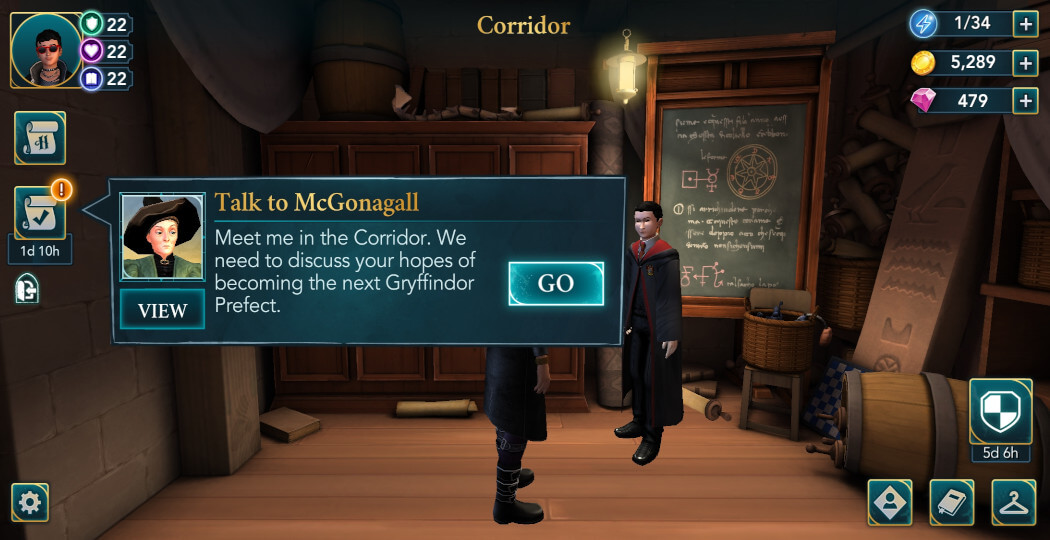 When you get there, you will find out that helping the First-Year was actually one of the tests, and if you chose to help him eagerly, you’ll be rewarded with ten House Points. Otherwise, you’ll lose ten points. 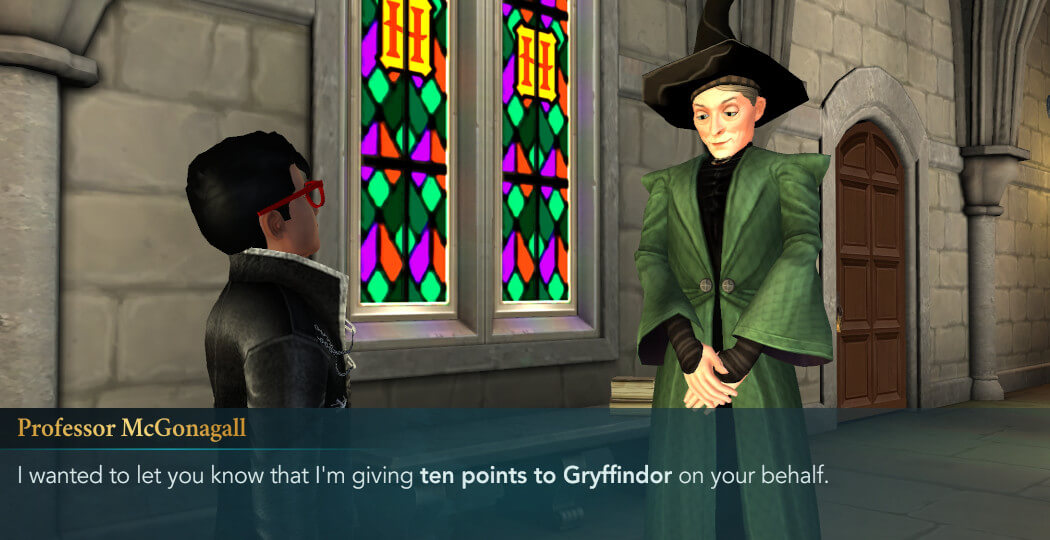 You’ll then receive a new task to meet Filch in his office. By the looks of it, this order came directly from the Headmaster. 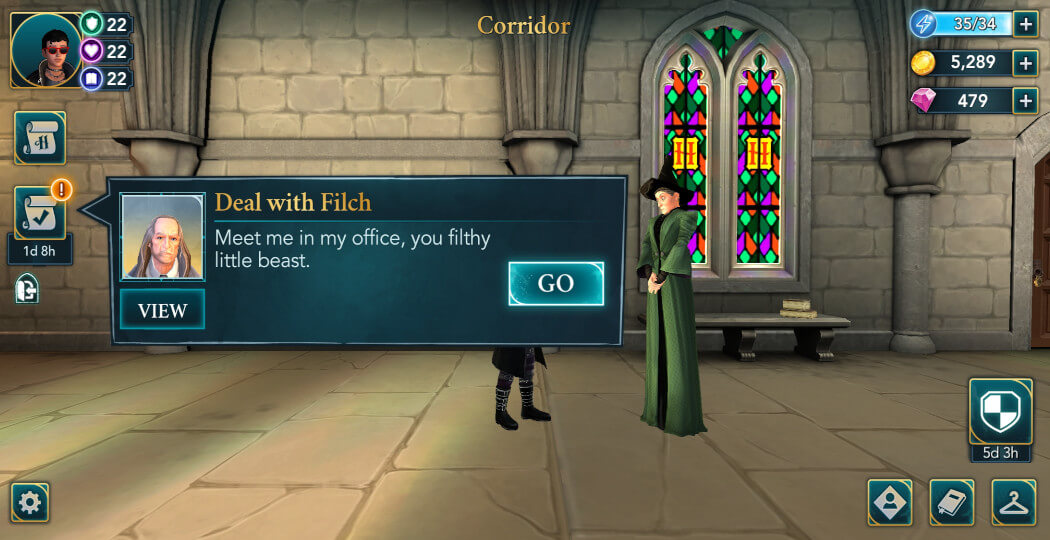 Apparently, the caretaker isn’t too pleased by this either. 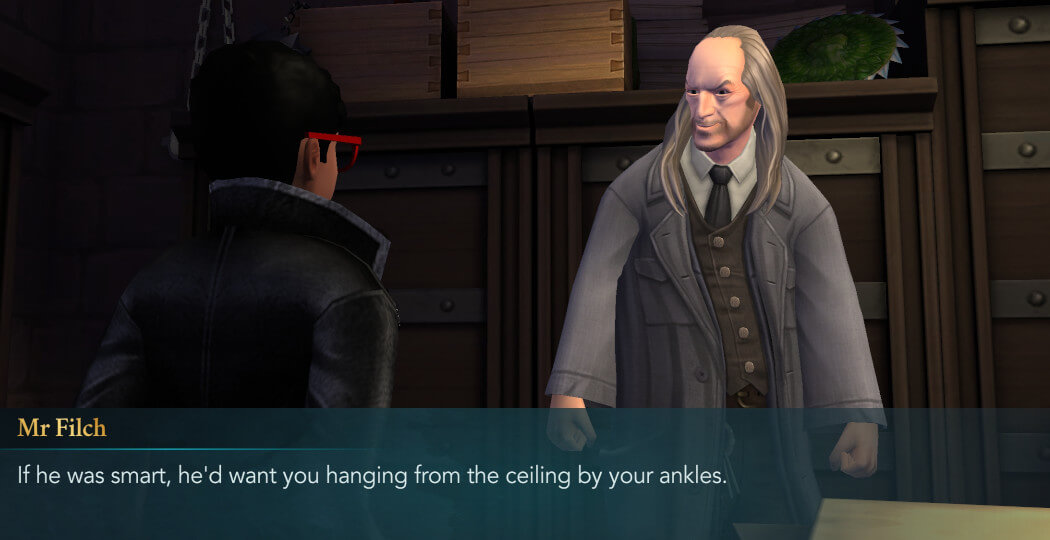 Learning from Filch is a five-star task with a time limit of three hours. Like before, all of the stars are needed in order to pass. 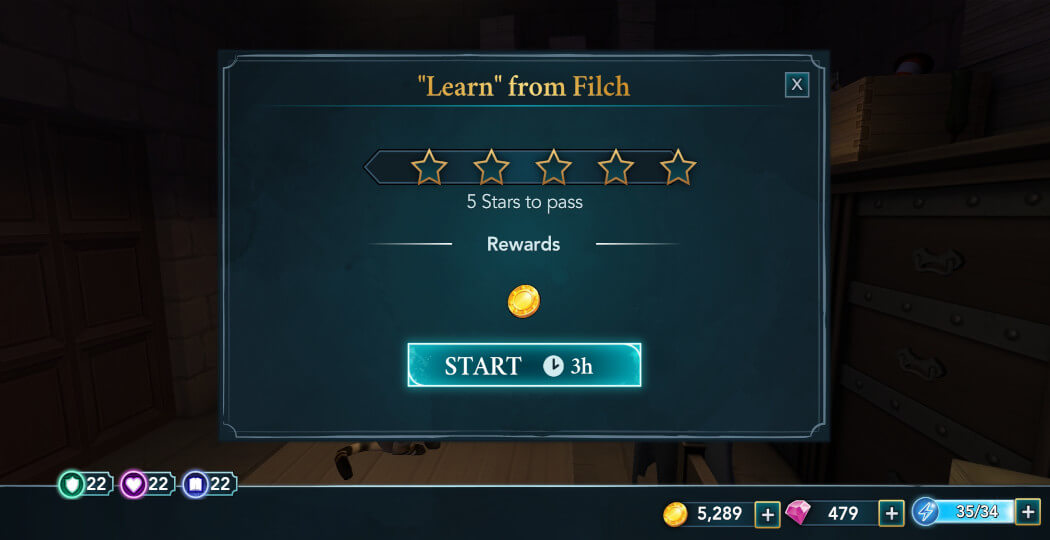 Do this just like any other story task and you shouldn’t encounter any problems. 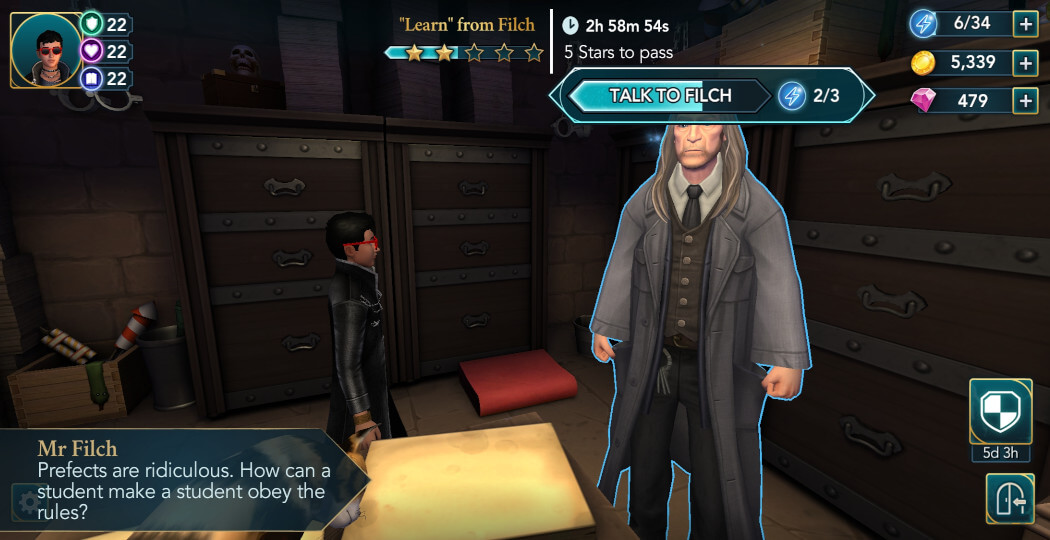 After you finish this, you’ll witness a funny dialogue before getting the next task. 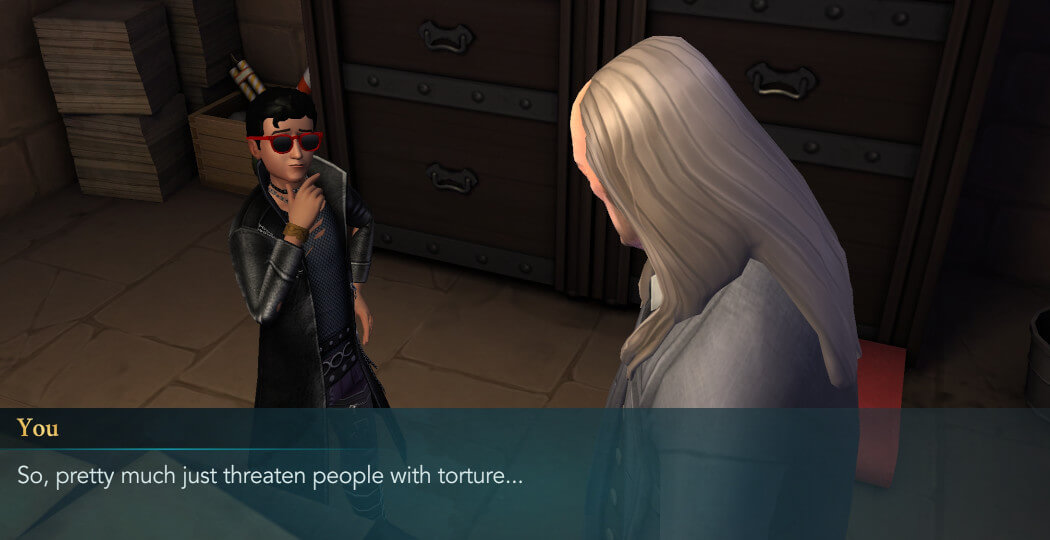 Then, you’ll need to report to the Headmaster. Hit the GO button and proceed to his office. 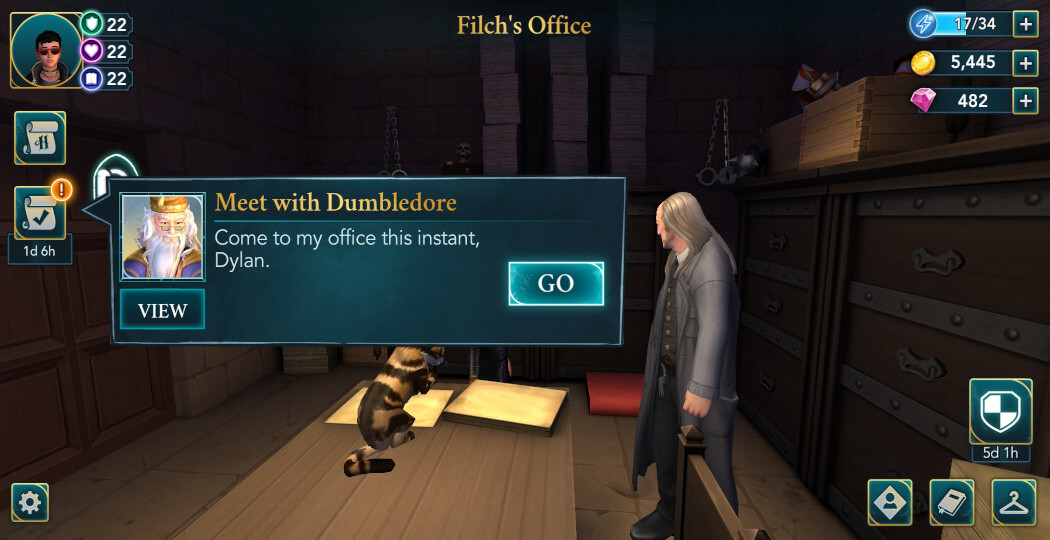 As usual, you’ll have to wait for a while until Professor Dumbledore is ready to see you. This is an eight-hour task with the passing requirement of five stars. 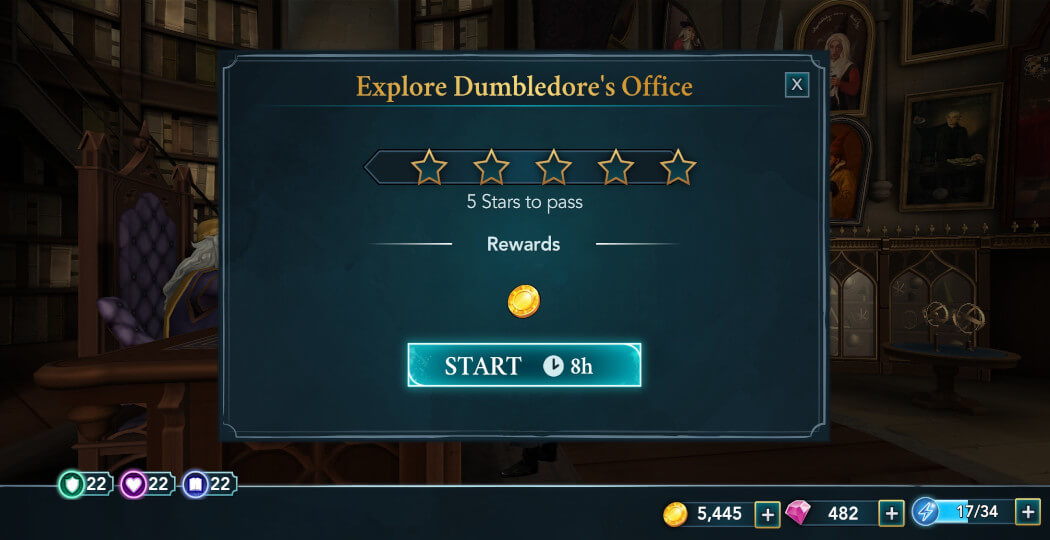 Like the other times you’ve visited the Headmaster’s office, this task is also split into three parts. The first part involves examining the various portraits. 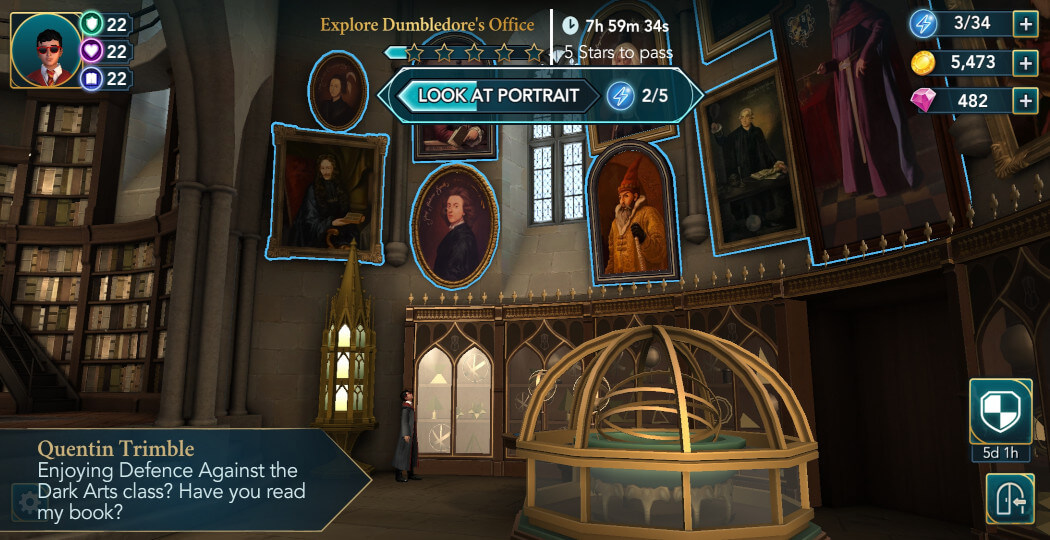 Next, you’ll look at Dumbledore’s desk while he is working. 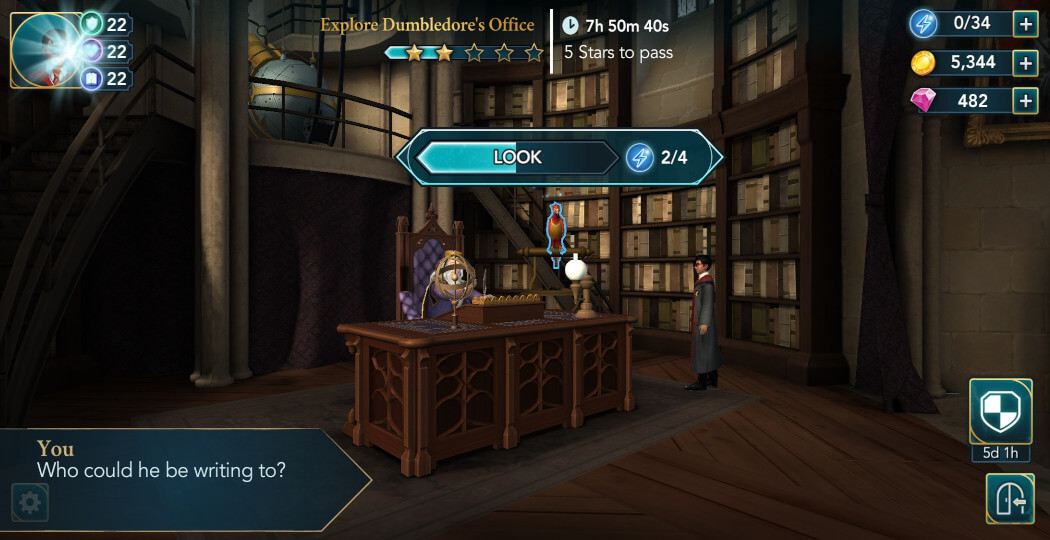 Lastly, you’ll check out the upper section of his office. 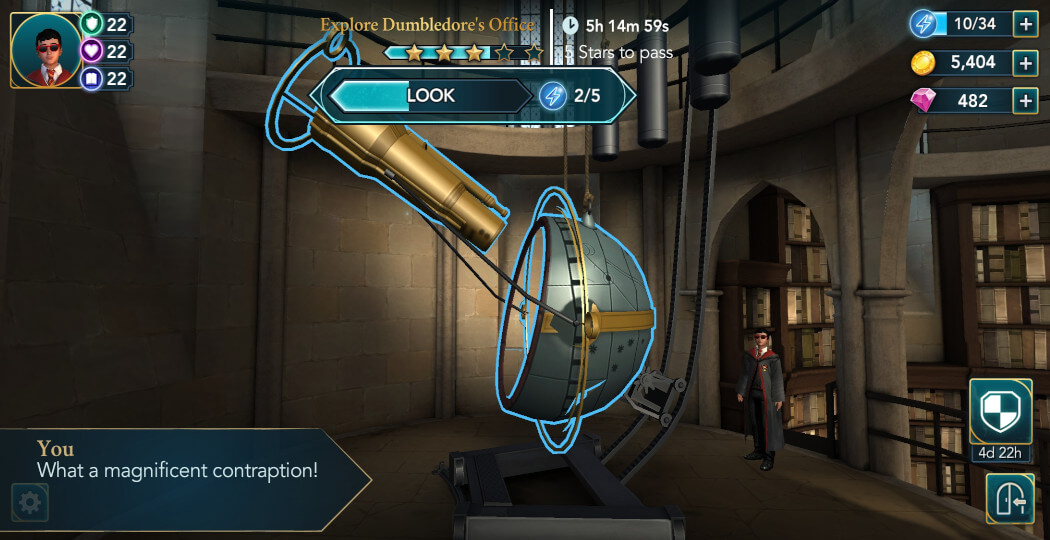 Once you are done, Professor Dumbledore will award you twenty House Points in case you reported the student using magic outside of class back in Part Two of this adventure. 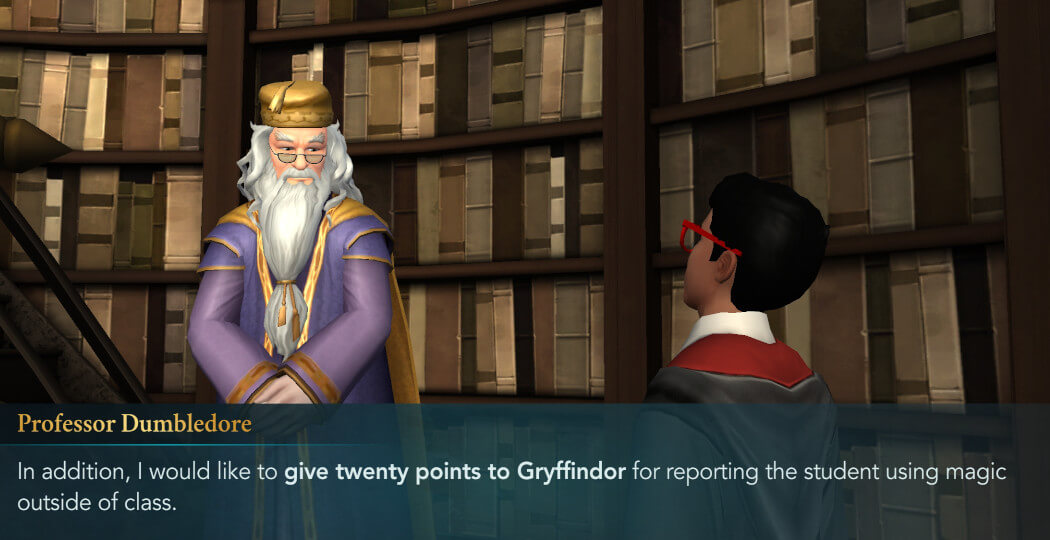 Apparently, the Headmaster is pretty satisfied with your performance so far, but whether or not you’ll become a Prefect isn’t entirely up to him. 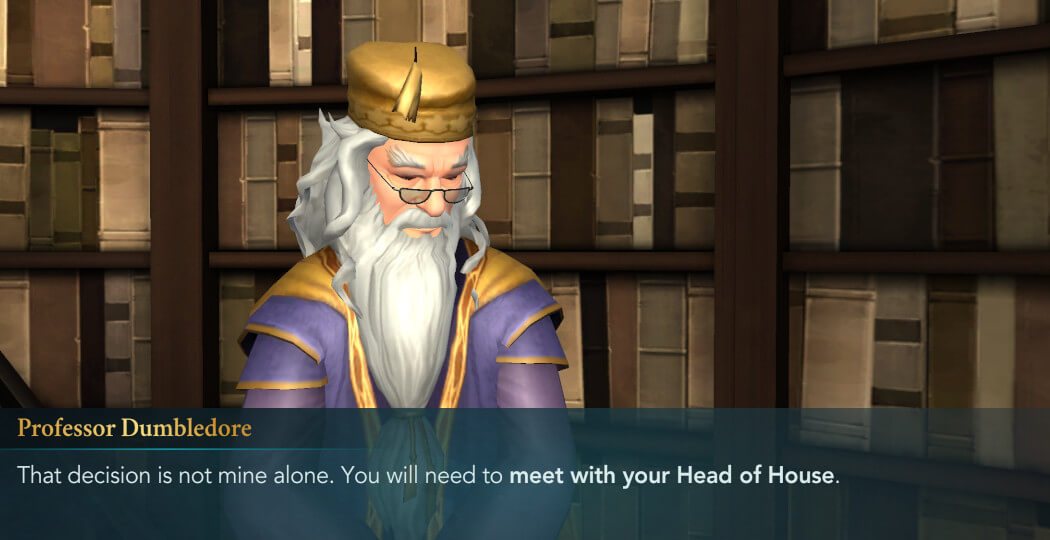 Lastly, you’ll need to report to your Head of House to see if you’re a Prefect. 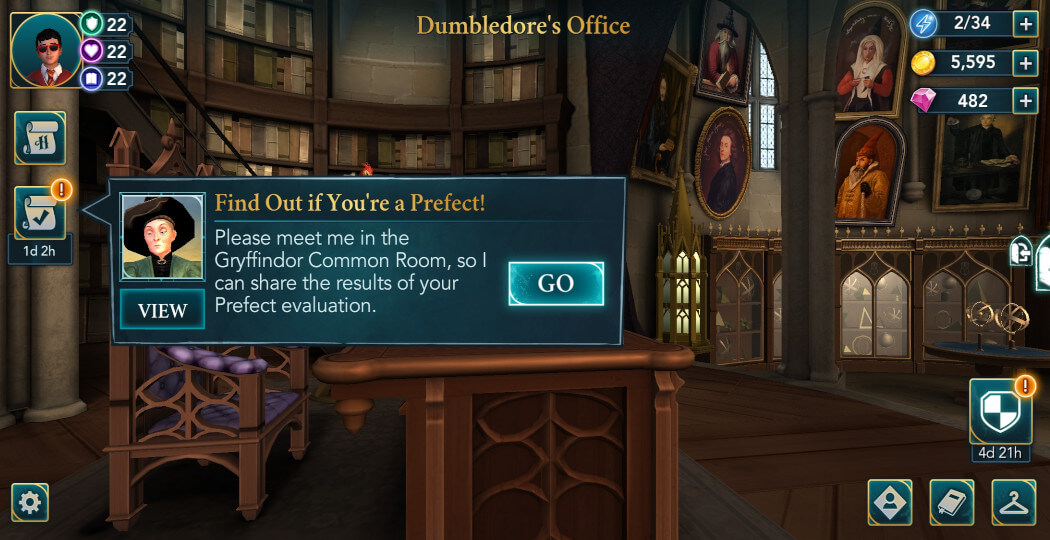 When you arrive, you’ll be able to interact with some of your housemates and see what they have to say. 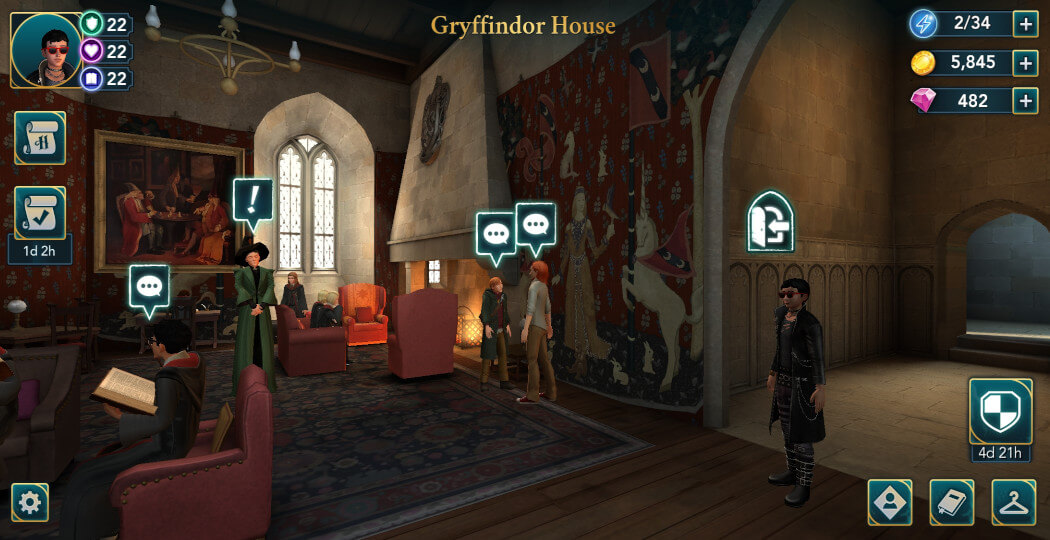 Your Head of House will congratulate you and tell you that you’ve earned your Prefect badge and everything else that comes with it. 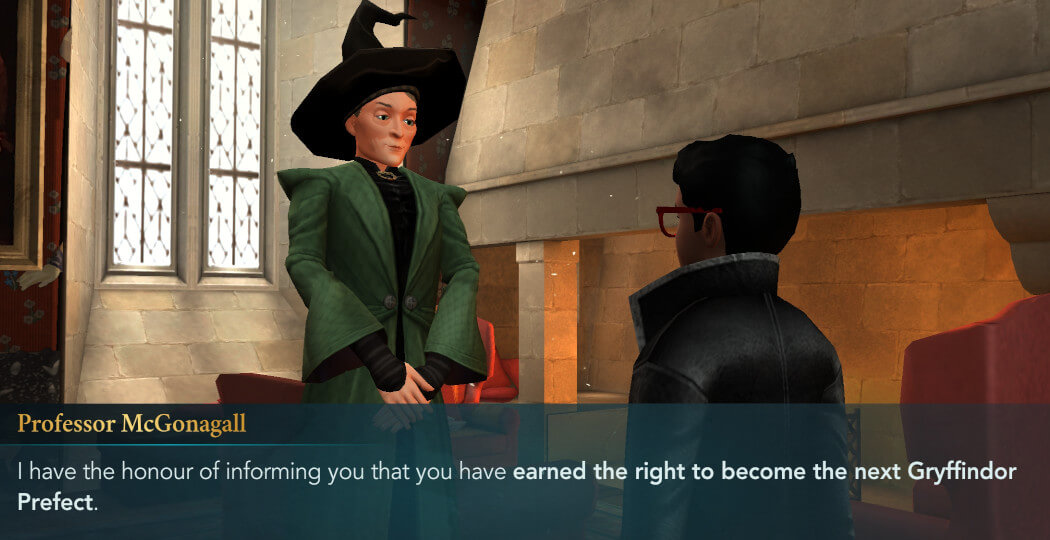 Your character will be overjoyed hearing this news. 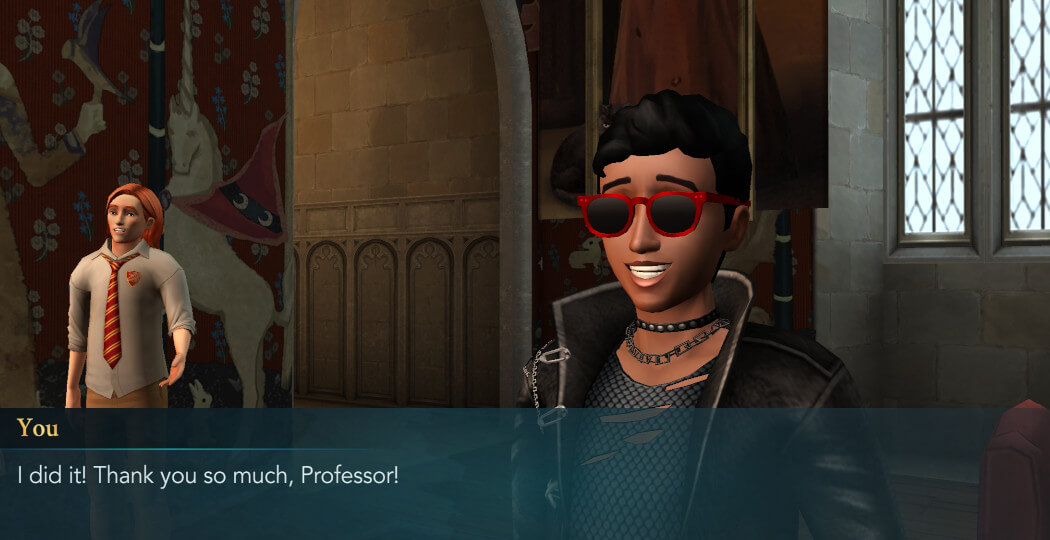 Shortly after this adventure will come to its conclusion. Hit the Collect button to claim your Prefect badge! 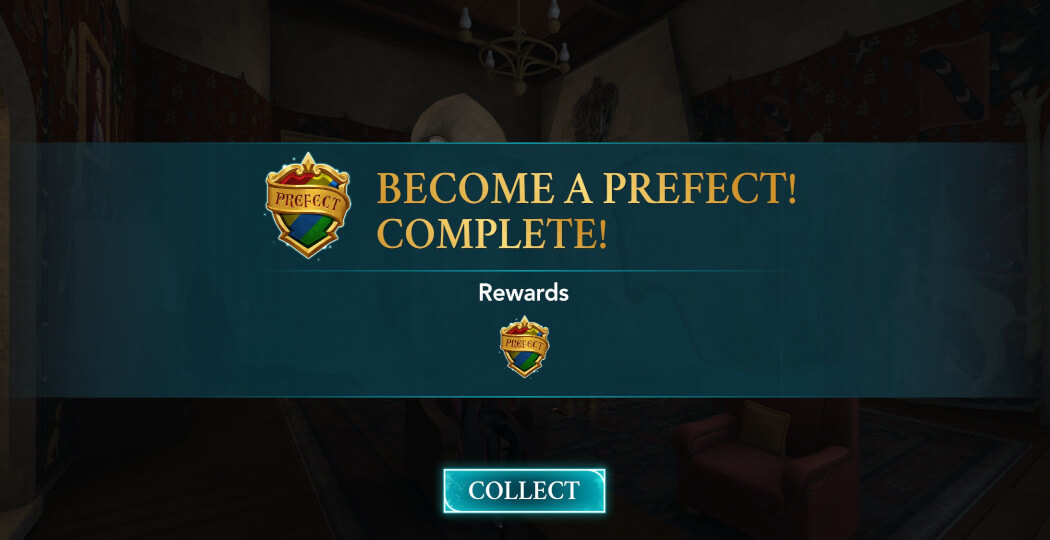 Congratulations! You’ve earned one of the highest honors a student can achieve. When you start Year Five, you’ll be able to do the Prefect’s duties. How did you like this adventure? Which part did you find the most exciting? Let us know in the comments below.
Thank you for reading. Until next time.

You can check out our video playthrough of Part 4 HERE