Hello everyone, welcome to Chapter Two of Year Two of our Magical Journey Walkthrough for Harry Potter: Hogwarts Mystery. In the previous Chapter, we arrived back at Hogwarts after spending our summer holidays. We attended the welcoming ceremony, during which we realized that our friend, Ben Copper is missing. Sadly, no one we asked knew where Ben is, we asked the Head of his House, Professor McGonagall for advice. She told us to search any place where Ben used to hide before. So, we went to the artefact room. There, we managed to find a note which pointed to Slytherin (or Gryffindor if you are Slytherin or Ravenclaw) Common Room. Rowan is tasked to come up with a plan to sneak in there, while it’s your job to find a way to avoid their Prefect.

There is some waiting time until you can proceed with the story part, so it is the best option to complete the lessons in the meantime. Tap on the GO button and proceed to the Charms Classroom. 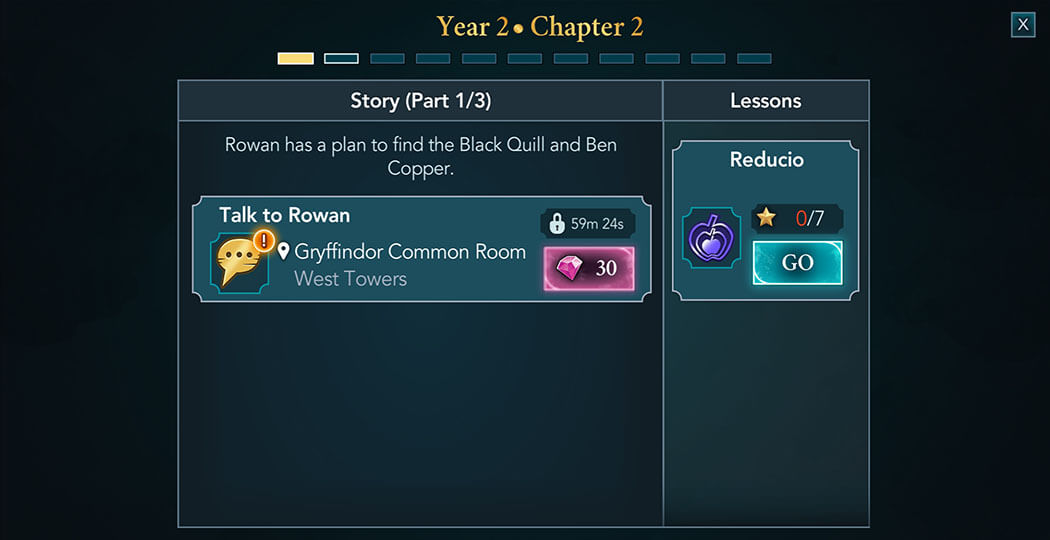 To unlock Reducio lesson, you need to earn a total of seven stars from the Charms Class. The fastest way to do so is by completing an eight-hour and a two-hour lesson. But if you want to get some additional attribute and house points, you can go with two eight-hour classes. When you are ready, hit the start button to begin. 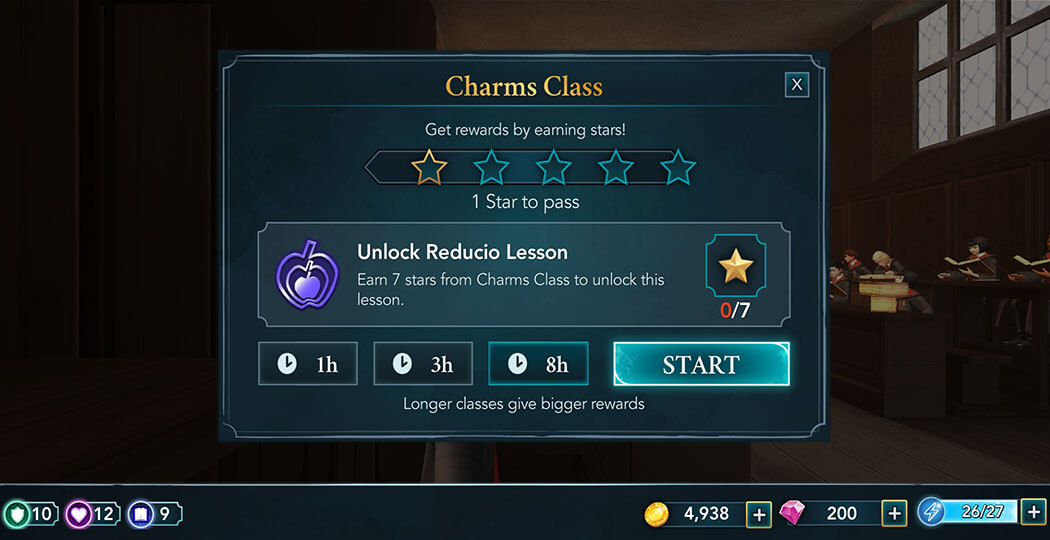 For these classes, simply follow the same steps as with any other Charms class. Complete actions by tapping on the glowing objects. This will fill up the star meter and eventually grant you stars. 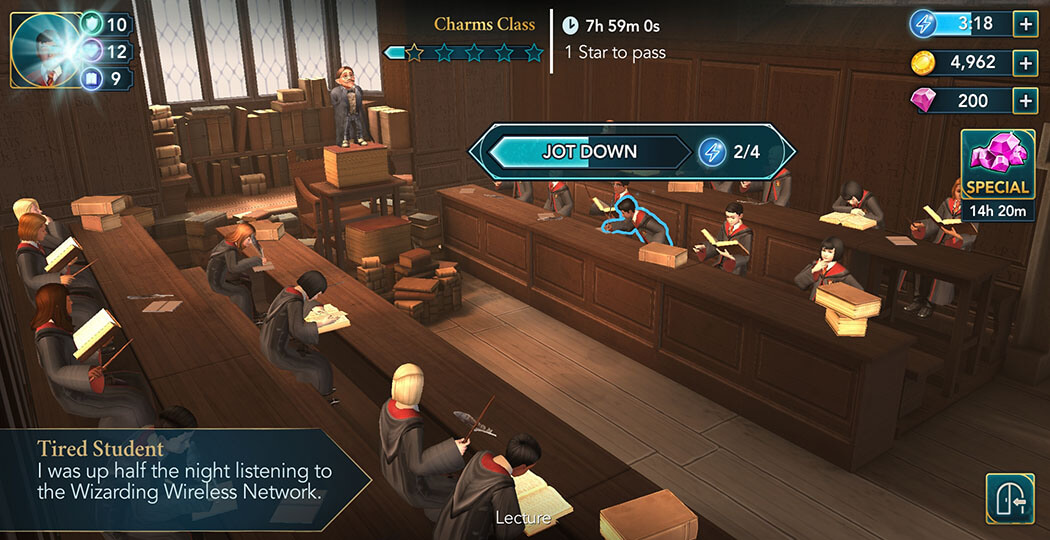 Each time you earn a star, you’ll receive a mini-task. Completing one of those will award you with ten Empathy points, so it’s in your best interest to succeed at them. 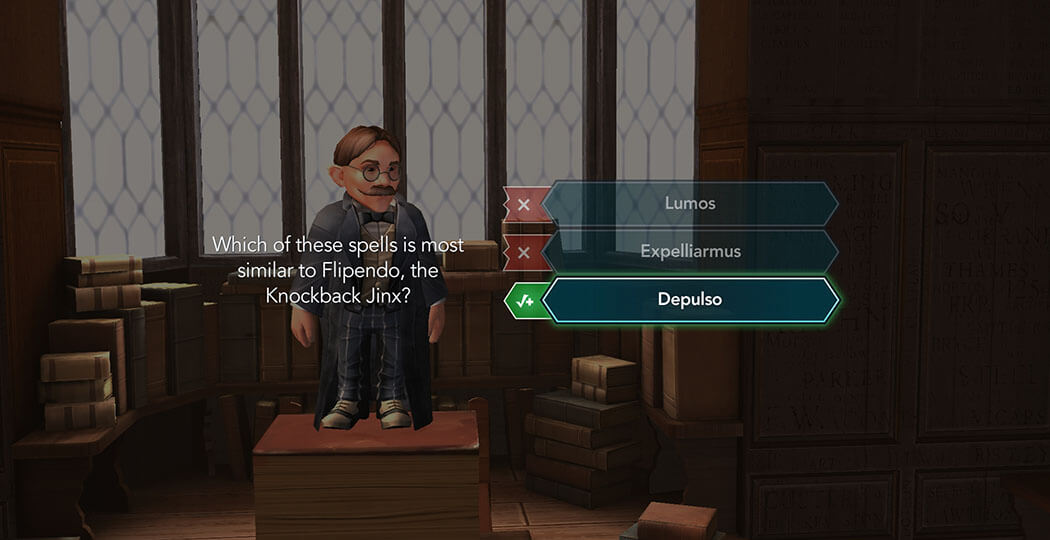 When you are done, tap on the Collect button to continue. After earning all seven stars, Reducio lesson should be unlocked, but it is unavailable for the moment. In any case, hit the GO button and proceed to your Common Room to continue with the story. 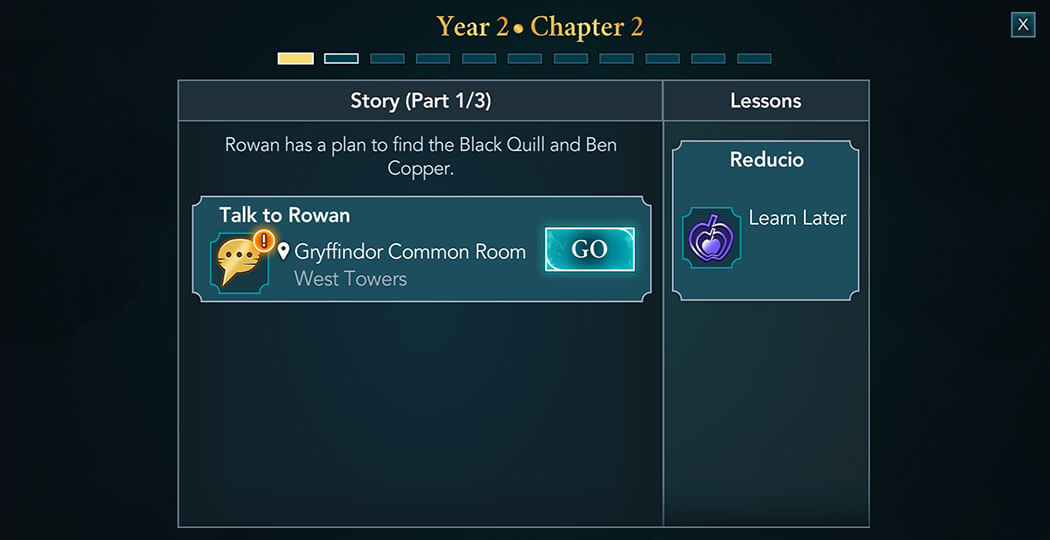 When you get there you’ll notice that some students have speech bubbles above them. Tap on those to check out what they have to say. 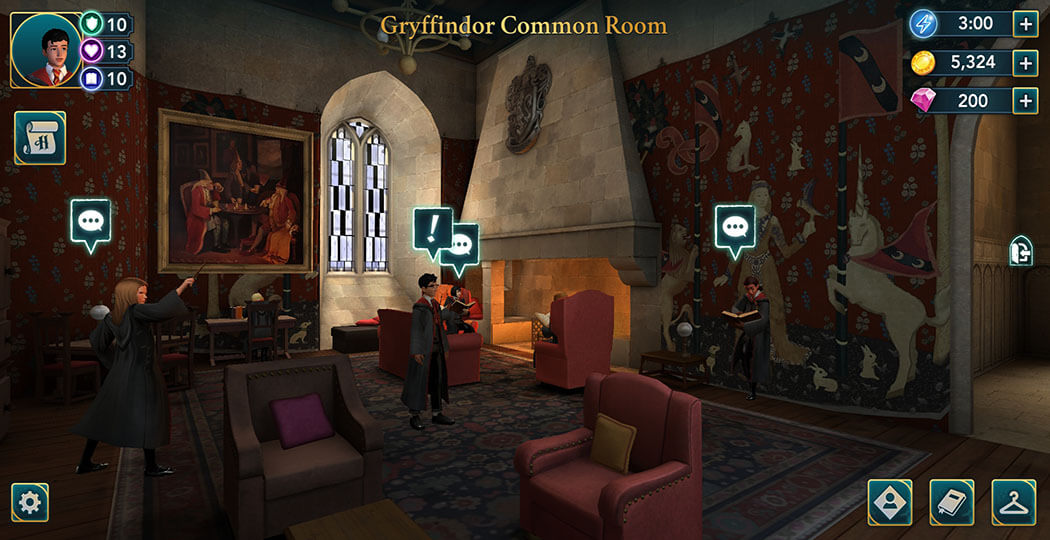 Once you’ve done that, tap on the exclamation mark to start the conversation with Rowan. He’ll tell you his plan to enter the Slytherin Common Room. It involves the use of shrinking and growing charms. He’ll ask for your opinion about it. You have three possible options. 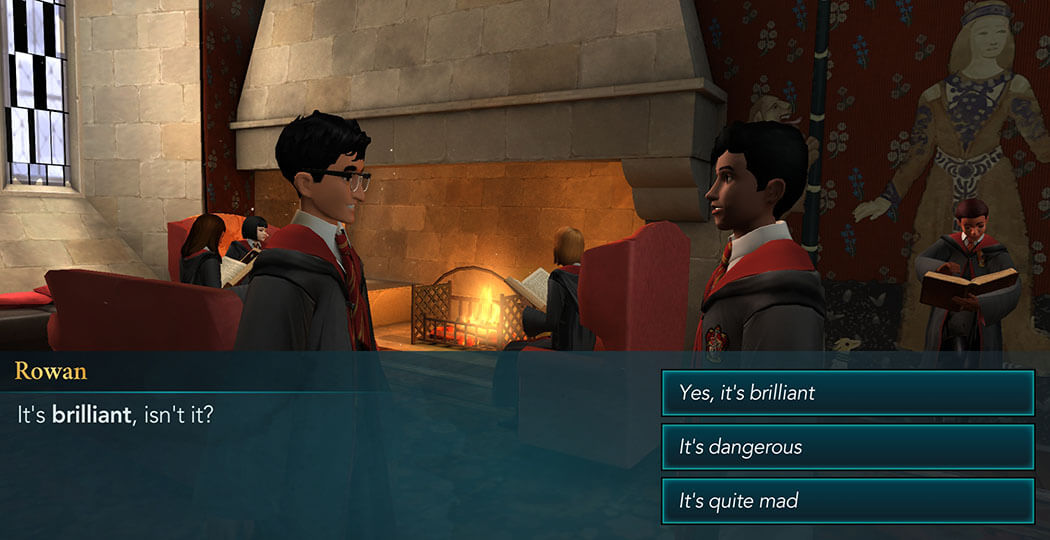 Each of those will award you with five points in an attribute, but the outcome is pretty much the same – you’ll decide to stick with his plan. One of the problems is the Slytherin Prefect, so it is decided that you take care of him. That is your next task. However, there is a three-hour waiting period before you can proceed, so you can either wait a bit or spend some gems to speed up the process. When you are ready, tap on the GO button to continue. 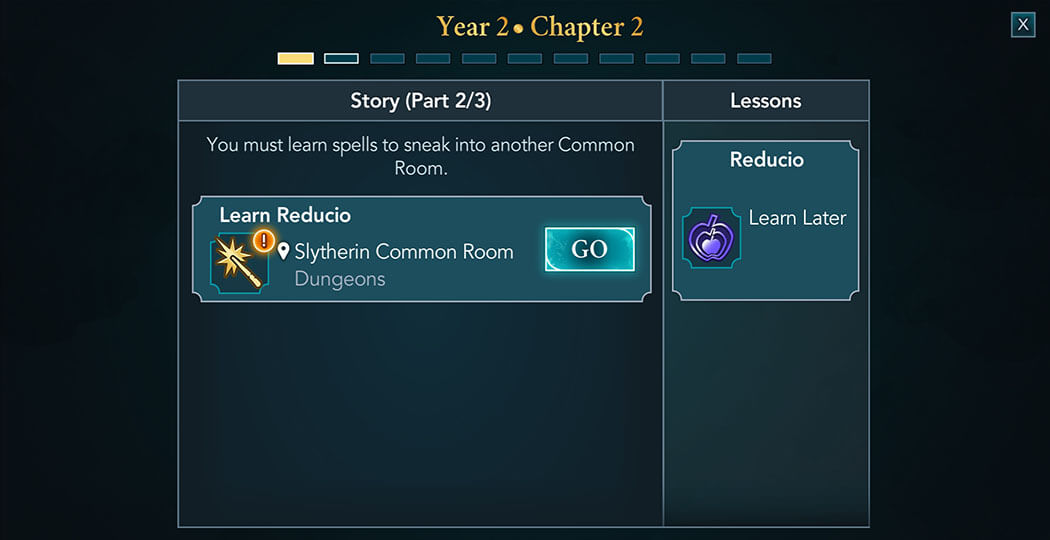 There you’ll encounter Felix Rosier, the Slytherin Prefect. Note that this part is different if you are playing a Slytherin or Ravenclaw character – in which case you will go outside of Gryffindor’s Common Room and encounter their Prefect Angelica. However, the gameplay aspects are fairly similar with very minor differences. After a bit of talking, you’ll try to convince him that the students from your house are planning to prank Slytherin. He’ll be awfully suspicious, so you have two options – to trick him or not. 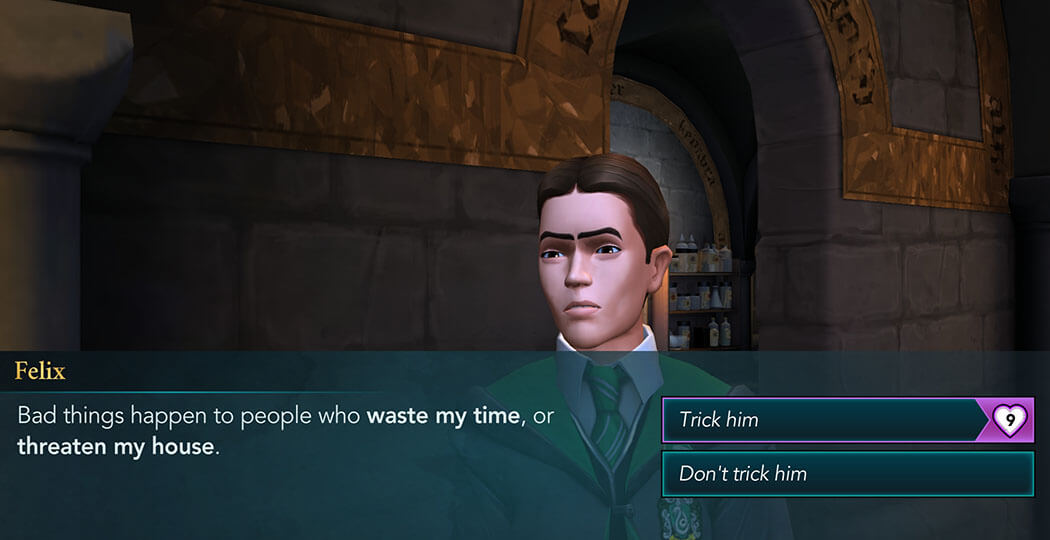 It is recommended to select the option to trick him since that one will award you with ten Empathy points, and will also make your plan go much smoother. After a bit more talking, he’ll be convinced to stay at the Quidditch match until it ends. Your next task is to learn Reducio spell. Hit the GO button and proceed to the Charms classroom. When you get there, you’ll see that some of the students want to tell you something. Tap on their speech bubbles to see what they have to say. 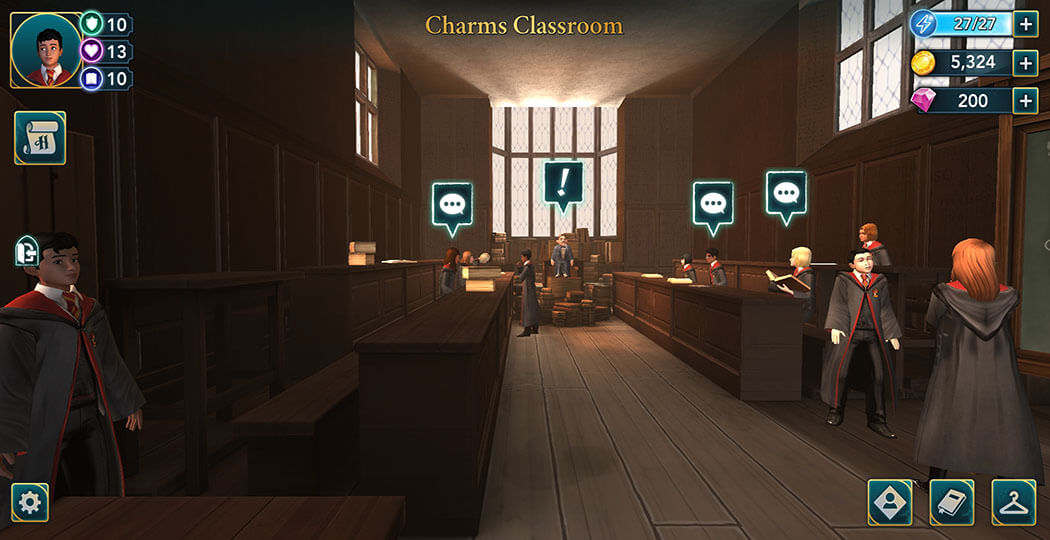 Once you’ve done that, tap on the exclamation mark to start the conversation with Professor Flitwick. You’ll talk to him about the effects of the shrinking charm. After a bit of talking, he’ll ask if you are planning to break the school rules again. He will insist that you be honest with him. You have two options. 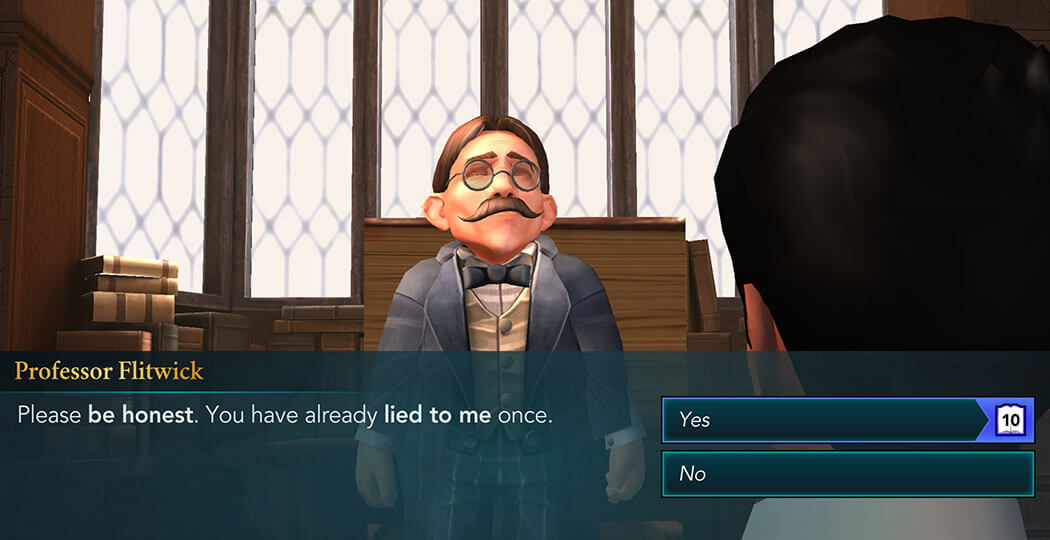 It is recommended that you pick the first option for two reasons. The first one is because it will be beneficial for your relationship with the professor. The second one is fairly obvious – this option will award you with ten Knowledge points. The only downside is that you need level ten knowledge to select it. After a bit more talking, the class will start. In order to pass this lesson, you need to earn five stars within three hours. It is highly recommended to start it with full energy, so you don’t have any trouble completing it. When you are ready, hit the Start button to begin. 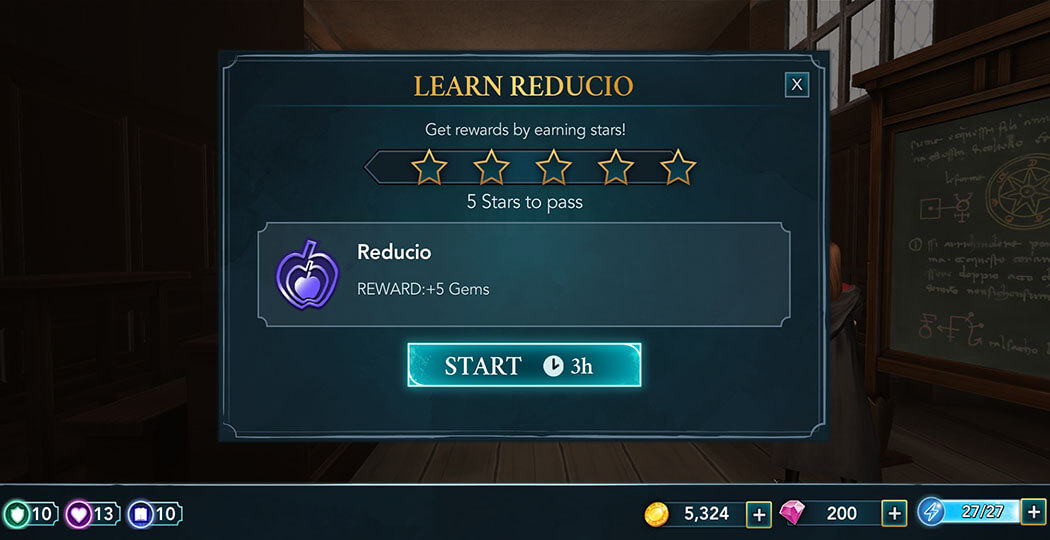 Same as before, tap on the glowing objects to complete the actions, fill up the star meter and earn stars. 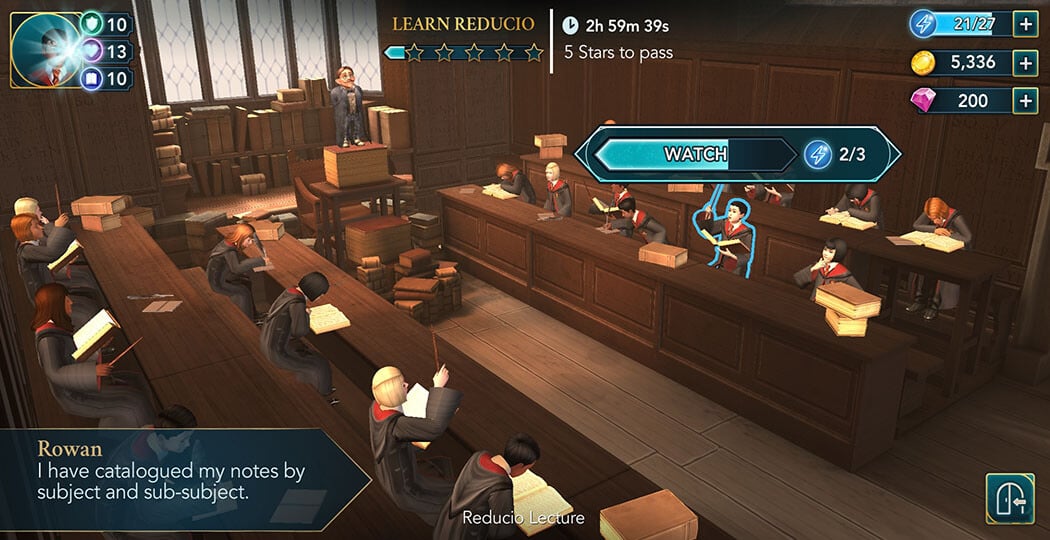 Also, pay attention to the mini-tasks, since completing each of those is worth ten Empathy points. 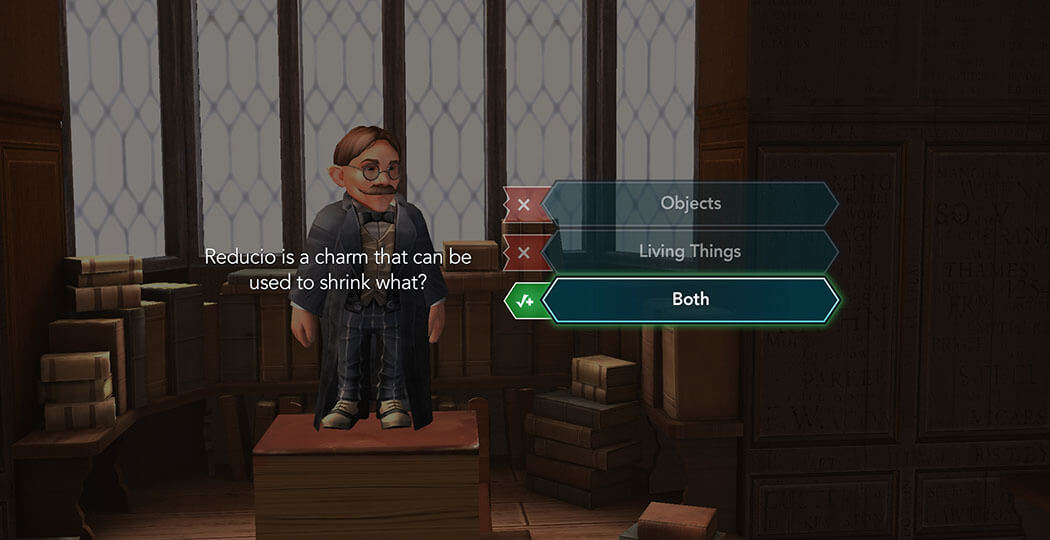 After you get the fifth star, you’ll be tasked with casting Reducio. Trace the path on the screen to successfully cast the spell. 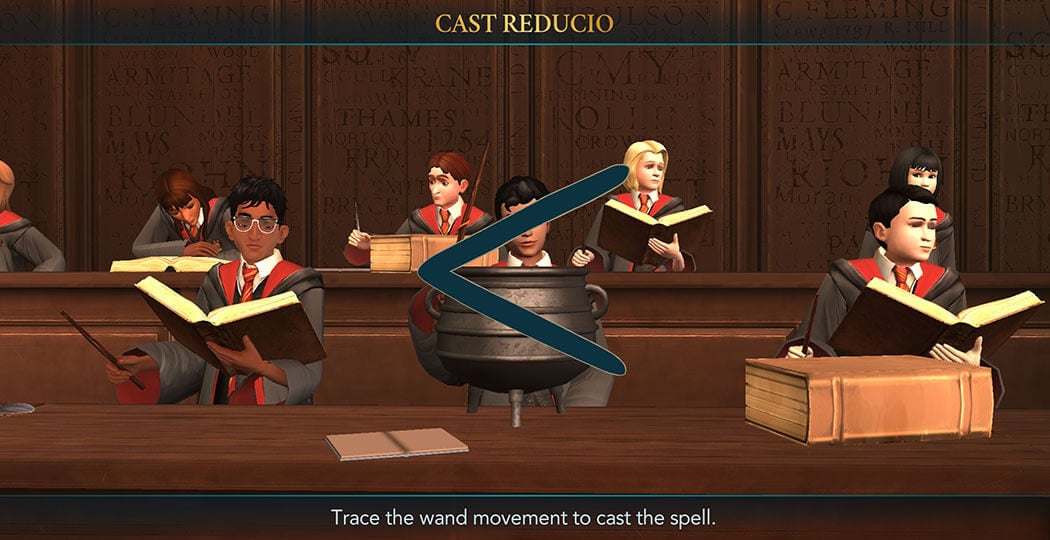 Congratulations! Now you have all the components of your plan ready. The next task is to meet with Rowan for a final discussion about it. Tap on the GO button and proceed to the Great Hall. Once you get there, you’ll notice the speech bubbles above some of the students. Tap on them to check out what they have to say to you. 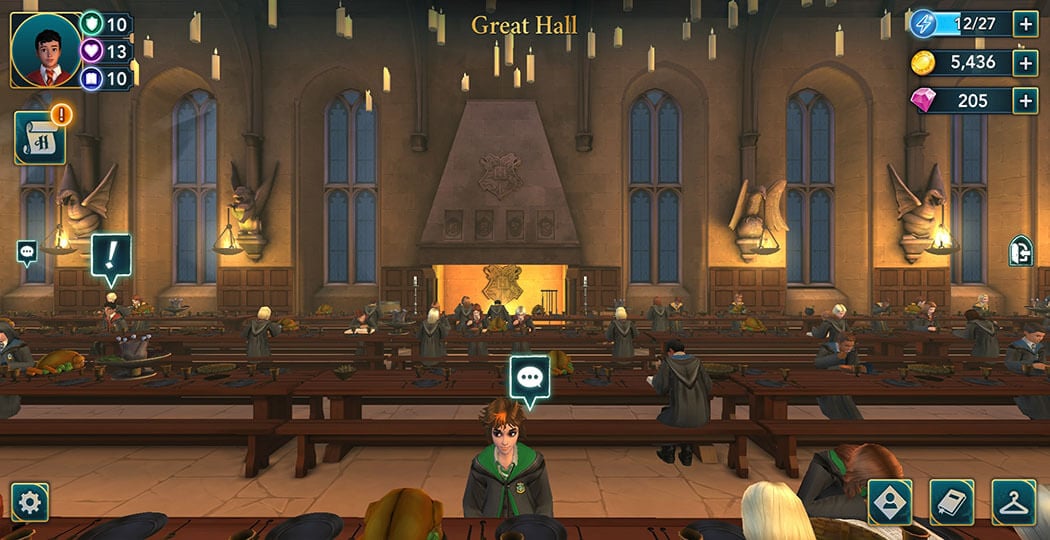 Afterward, tap on the exclamation mark to initiate the conversation with Rowan. After a bit of talking, you’ll notice that he is pretty upset about the whole situation with Ben’s disappearance, so it’s up to you to cheer him up. Tap on the handshake icon to open the task window. It will display the recommended attribute levels for this task as well as the cost of it. When you are ready, hit the Start button to begin. 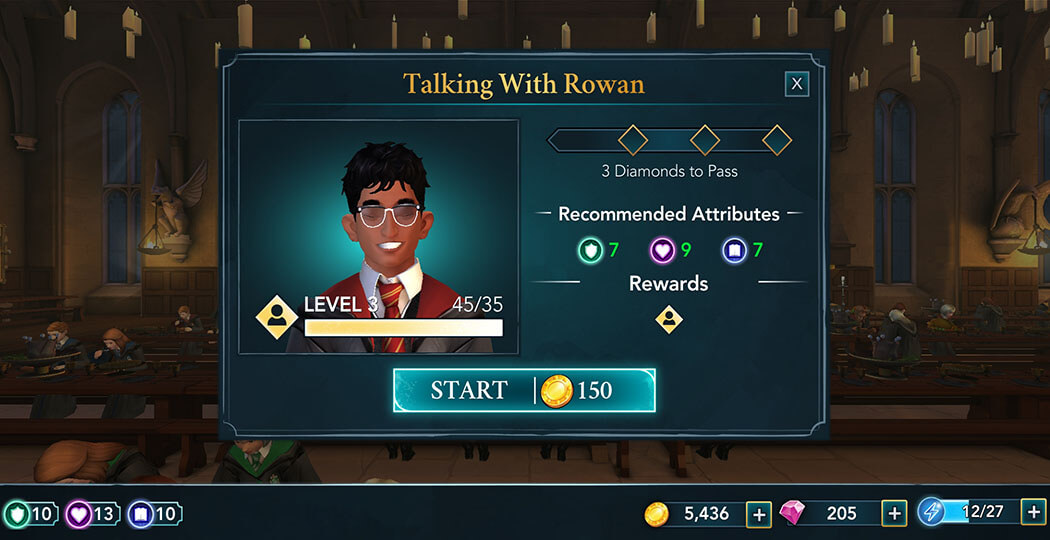 Basically, this task is pretty similar to the Meal with a friend mini-game, so in order to pass, you need to select the answers that will reassure Rowan the most. Simply be supportive and select the friendliest options and you should have no problem completing this in three or four turns. Below are some of the questions and the answers for this task. 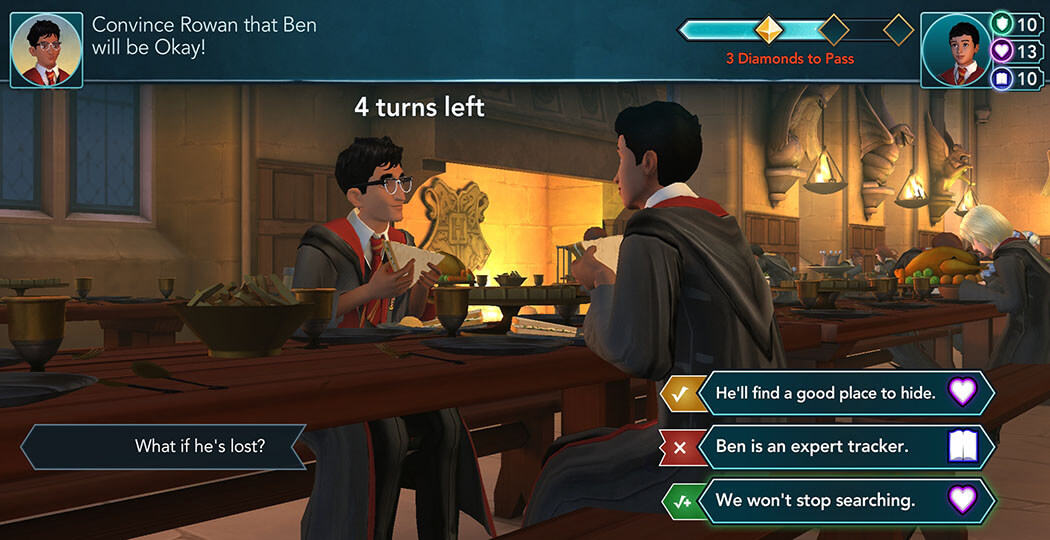 When you’re done, tap on the Collect button to continue. You’ll notice that Rowan is feeling much better now, and after some more talking, he will ask you to promise not to keep secrets from him. 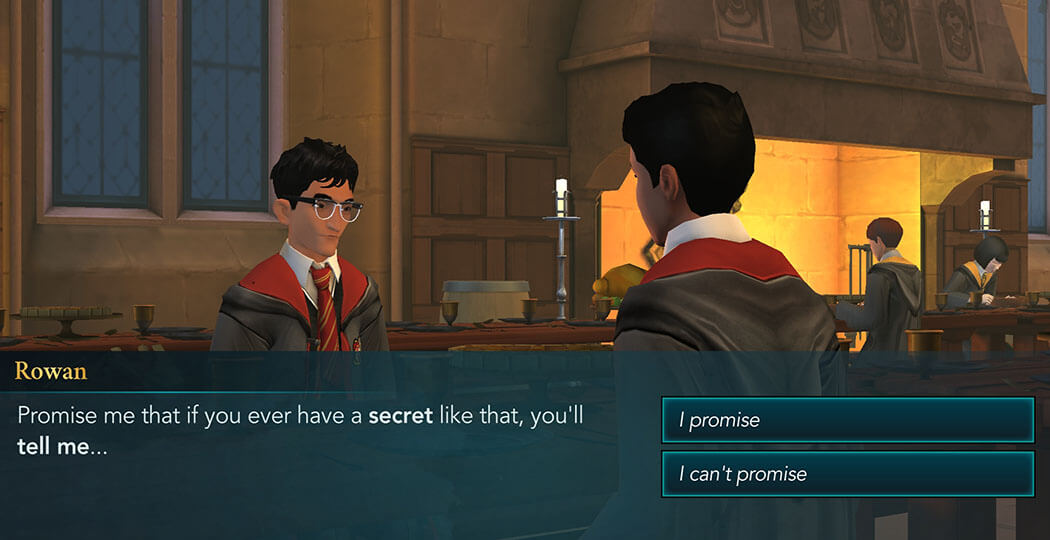 This choice is entirely up to you, but honestly, Rowan has earned your trust so far and he was the one person you could always rely on, so choosing to promise him this should be perfectly normal. Afterward, you’ll talk with him a bit more and that would be the end of Chapter Two of Year Two. 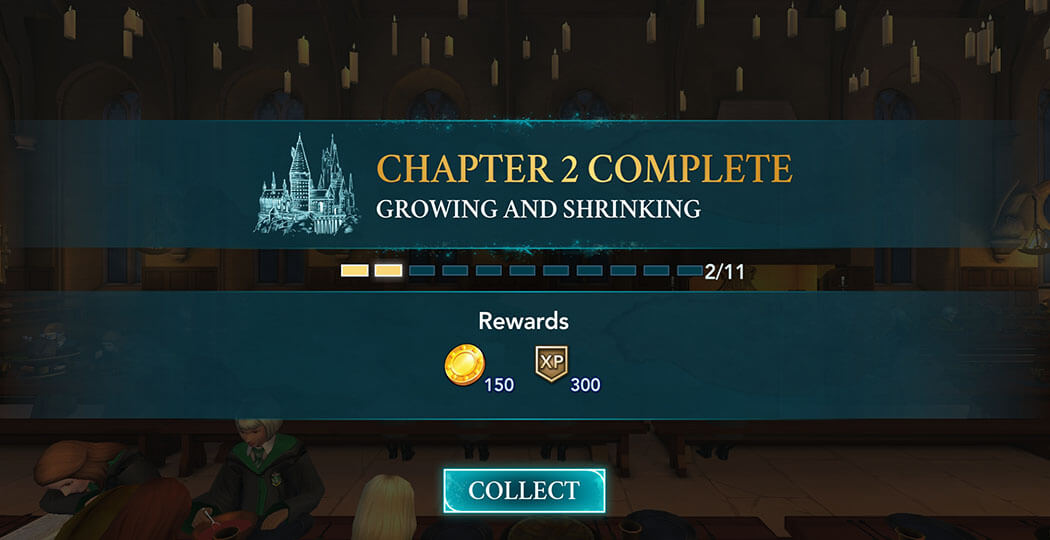 How did you find this Chapter? What were your favorite moments? Were you truthful to Professor Flitwick? Did you promise Rowan not to keep secrets from him? Let us know in the comments below. The second year of your Hogwarts studies has just begun and the things are already getting very interesting.

Thank you for reading and see you very soon with another part of our Magical Journey!

You can check out our video playthrough of Chapter 2 HERE