Hello everyone, welcome to Chapter Five of Year Two of our Magical Journey Walkthrough for Harry Potter: Hogwarts Mystery. In the previous Chapter, after visiting Ben, you found out that he does not remember anything that happened prior to being found. Because of that, you decided to search the icy corridor with Rowan and you stumbled upon a section of the wall which apparently has something hidden. You decided to go to Professor McGonagall and ask her to teach you the revealing charm. It took some convincing, but in the end, she agreed. Also, you dueled Merula again and defeated her without even breaking a sweat. Lastly, after using Revelio on the suspicious section of the wall, you found the hidden staircase from your vision which led you to what you assumed is one of the Cursed Vaults. Its door was sealed with ice, and unfortunately, Rowan got injured. He is currently resting in the Hospital Wing, and after a while, you will be able to visit him.

In the meantime, you should focus on the story section of the game. Tap the GO button and proceed to the Potions Classroom. 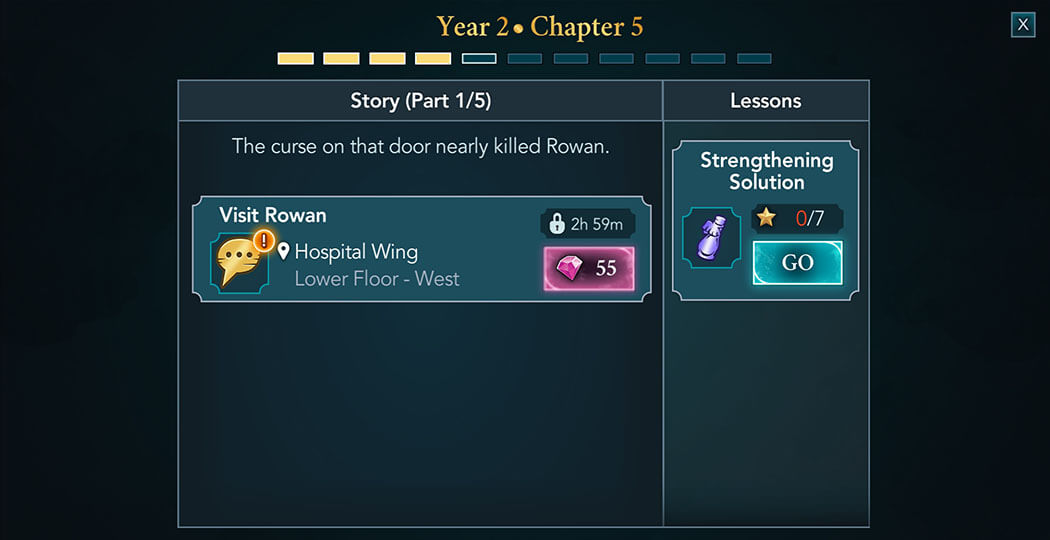 To unlock Strengthening Solution lesson, you need to earn a total of seven stars from Potions class. The fastest way to do it is by completing an eight-hour and a two-hour lesson. It is, however, recommended to take two eight-hour lessons because it will gain you many more attribute and house points. Once you’ve made your decision, hit the Start button to begin. 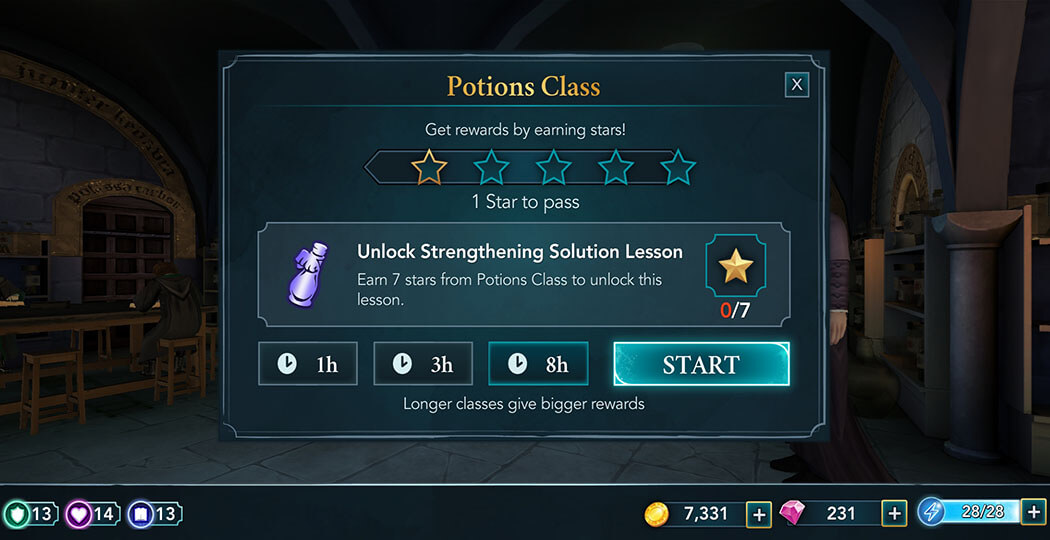 There isn’t much to say about this except a few things. Try to optimize energy usage by completing as many actions with high energy cost as possible. 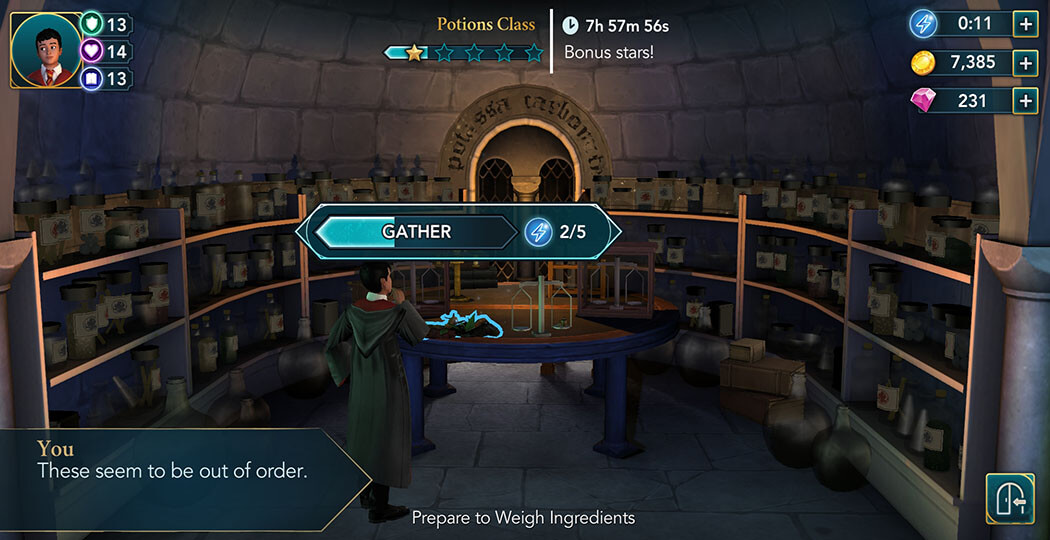 Also, pay attention to the mini-tasks, since successfully completing each of those will earn you an additional ten Knowledge points. 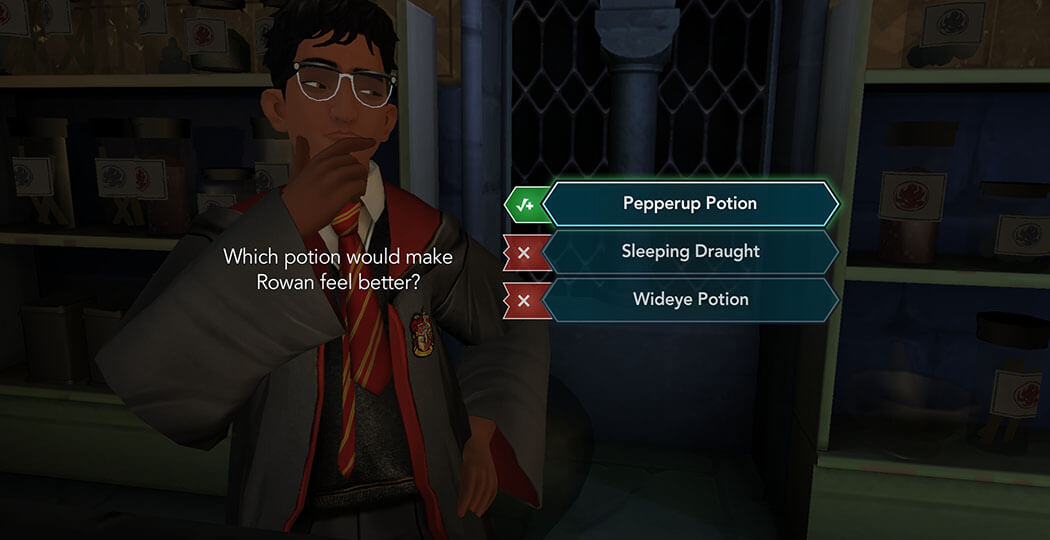 Once you obtain all seven stars, Strengthening Solution lesson should be unlocked. Hit the GO button and return to the Potions Classroom. To complete this lesson, you need to earn five stars within three hours. It is highly recommended to have full energy when starting this since it will make things much easier. Once you are ready, hit the Start button to begin. 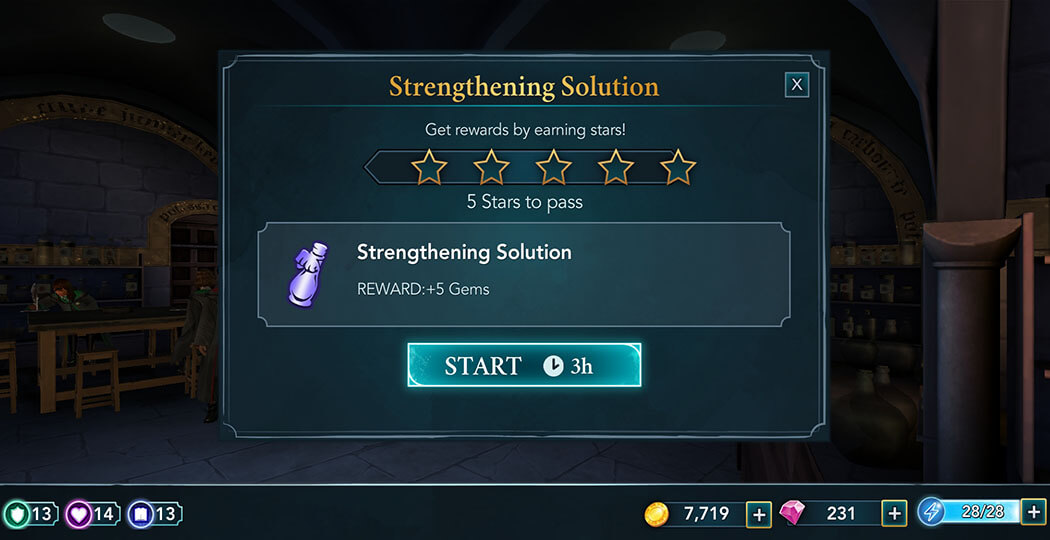 There isn’t much difference between this lesson and any of the other ones you completed so far. Just focus on completing high energy cost actions and you should be done in no time. 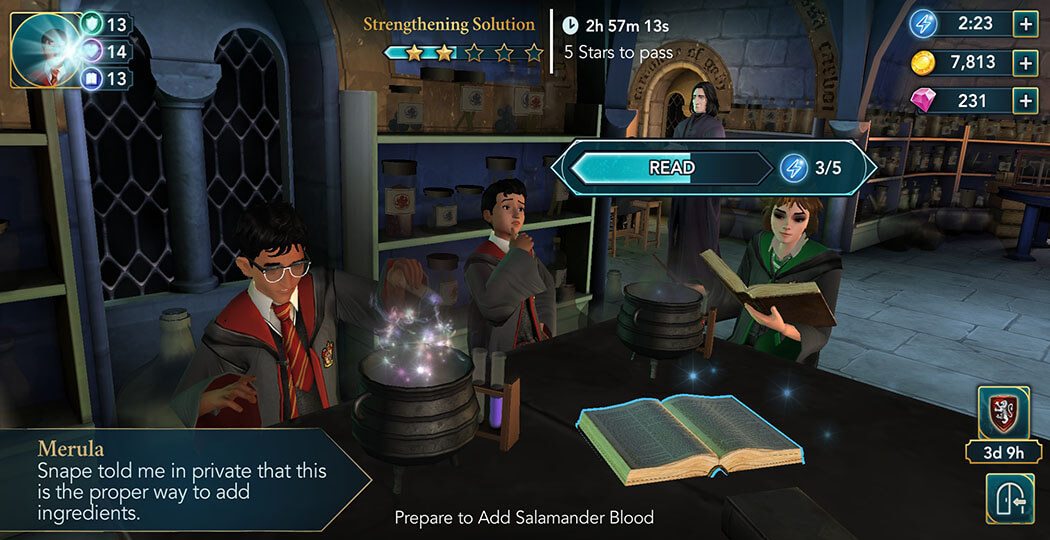 Once you obtain the fifth star, it is time to finish your potion. Trace the path on the screen to successfully complete brewing Strengthening Solution. 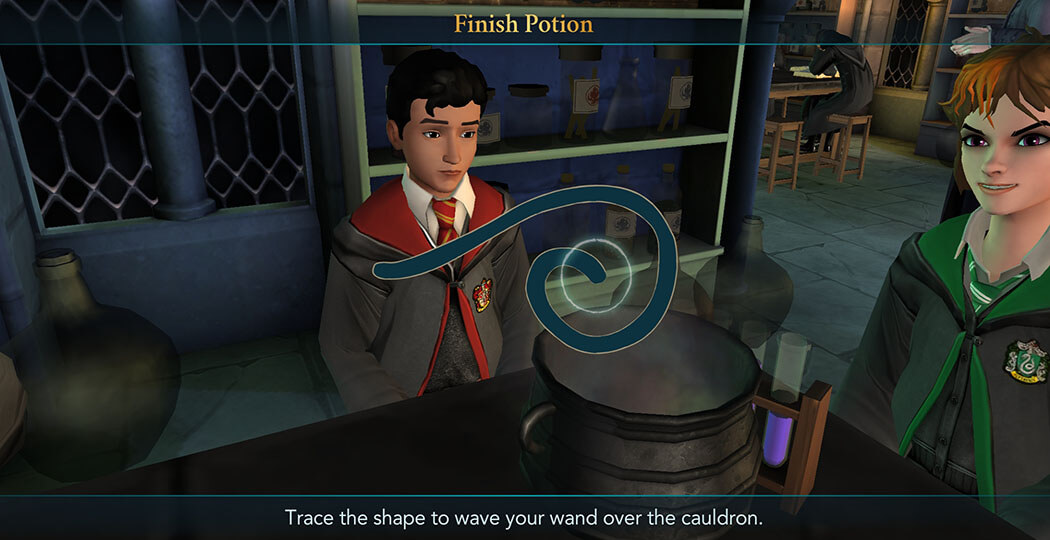 Now that you’re done with the lessons part of the chapter, you can focus on the story. Hit the GO button and proceed to the Hospital Wing to visit Rowan. Once you enter, you’ll notice that Penny is also visiting him. Tap on the exclamation mark to initiate the conversation with them. 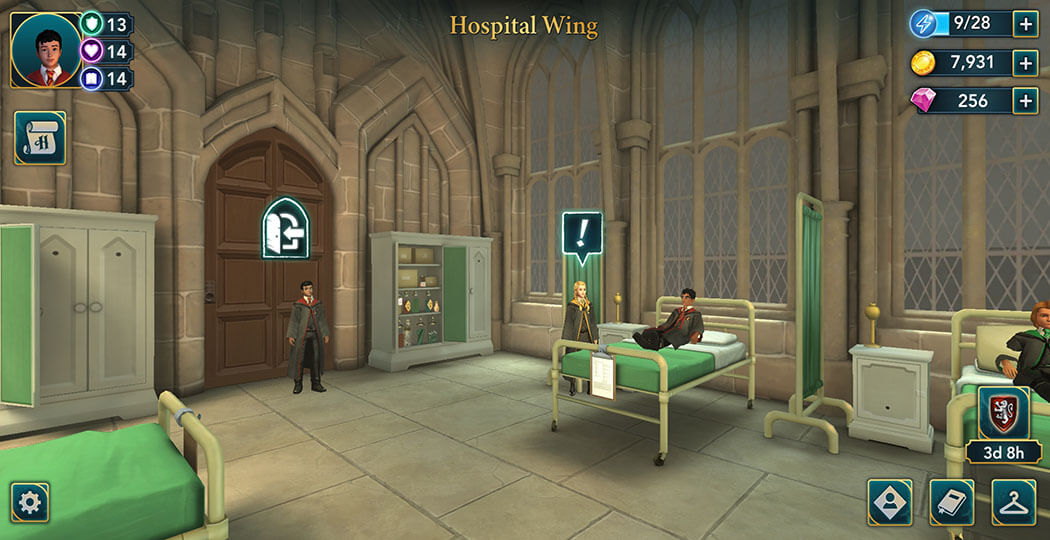 Penny will want to know what happened. You can select one of the two options. 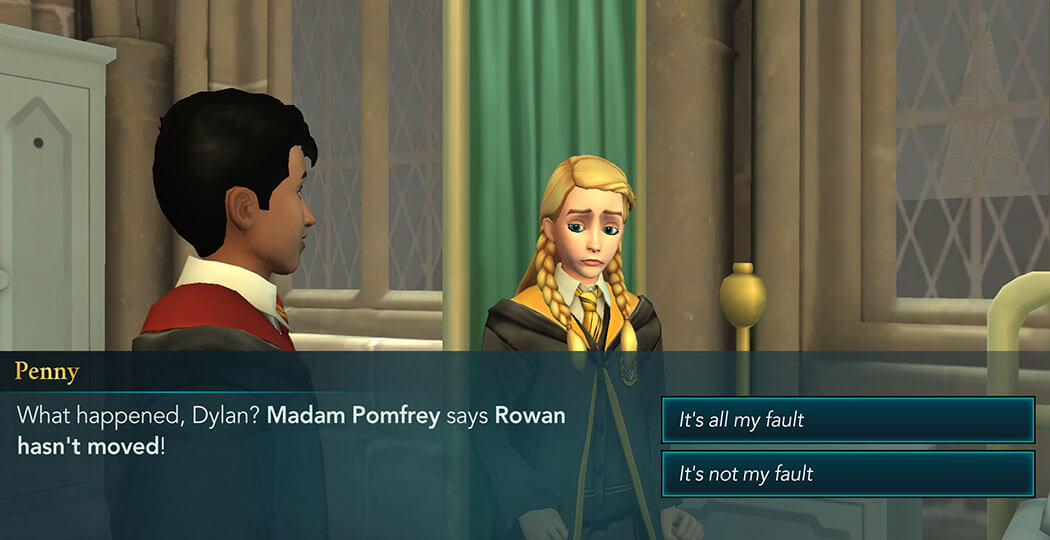 Each option will give you five attribute points, but there isn’t much of a difference in the outcome, so, pick the one you like the most. After talking with her and Rowan for a while, you’ll get the task to attend Potions Class. Hit the GO button and proceed to the Potions Classroom. When you get there, you’ll notice that some of the characters have things to tell you. Tapping on their speech bubbles will reveal what they have to say. 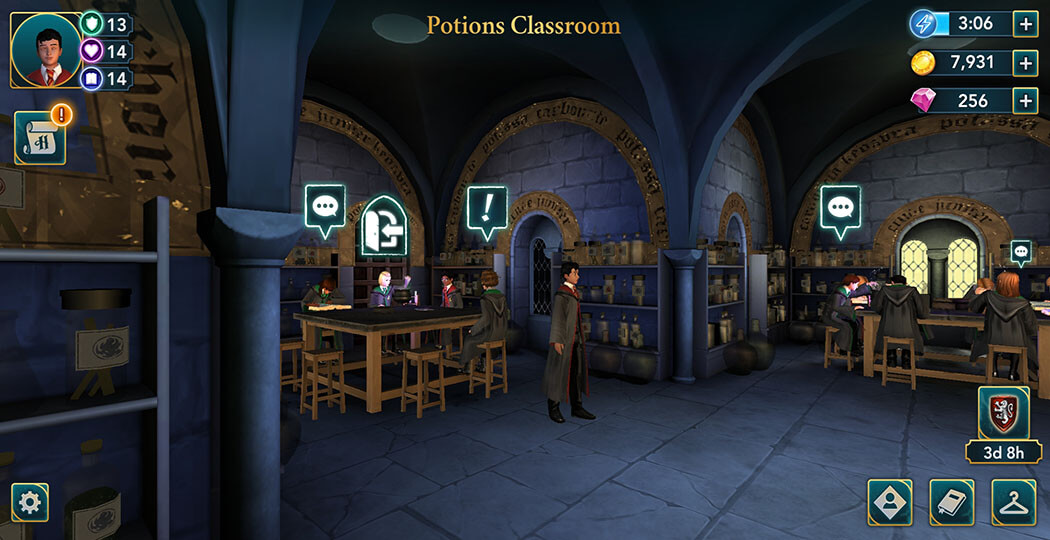 Afterward, tap on the exclamation mark to start the conversation with Merula. Since she didn’t see you around lately, she will want to know what you have been doing recently. You can choose one of three answers. 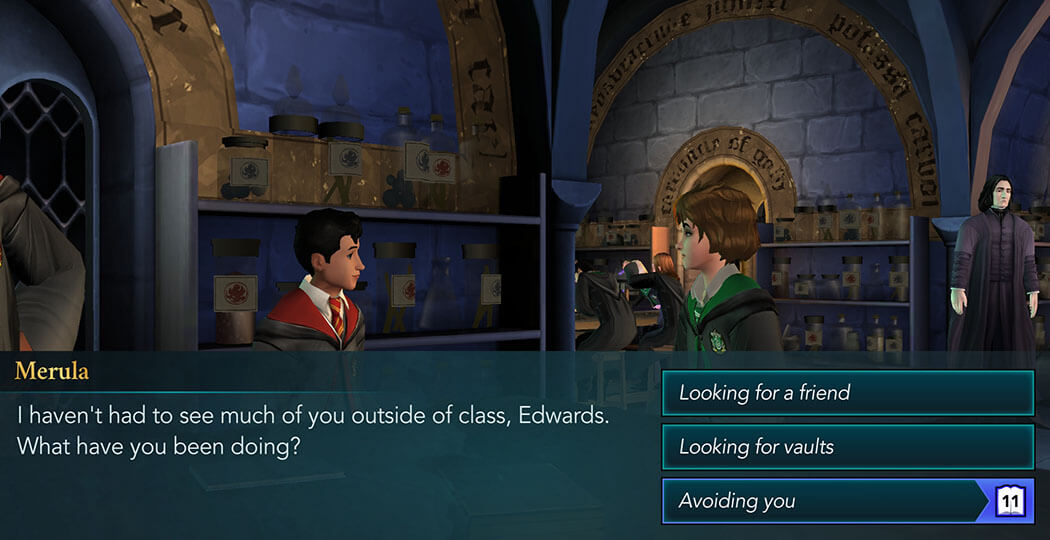 The first and the second option will give you five attribute points each, while the third will award you with ten Knowledge points, and is the preferred one. The only downside is that you need to have Knowledge attribute at level eleven to do so. None of those options have any significant impact on the story. After a bit of talking, Professor Snape will approach you and say that he has something to discuss with you at the end of the class. Hit the exclamation mark to open a task window. This class requires you to earn five stars within three hours, but in order to pass, you only need one. Once you are ready, hit the Start button to begin. 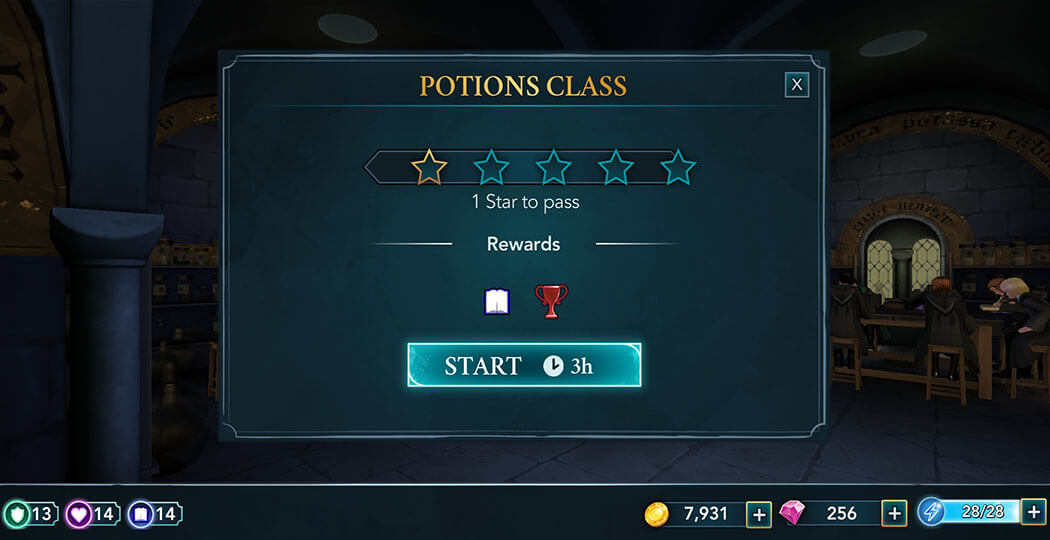 Try your best not to waste energy and to succeed at mini-tasks. Those two things are the most important when doing classes. 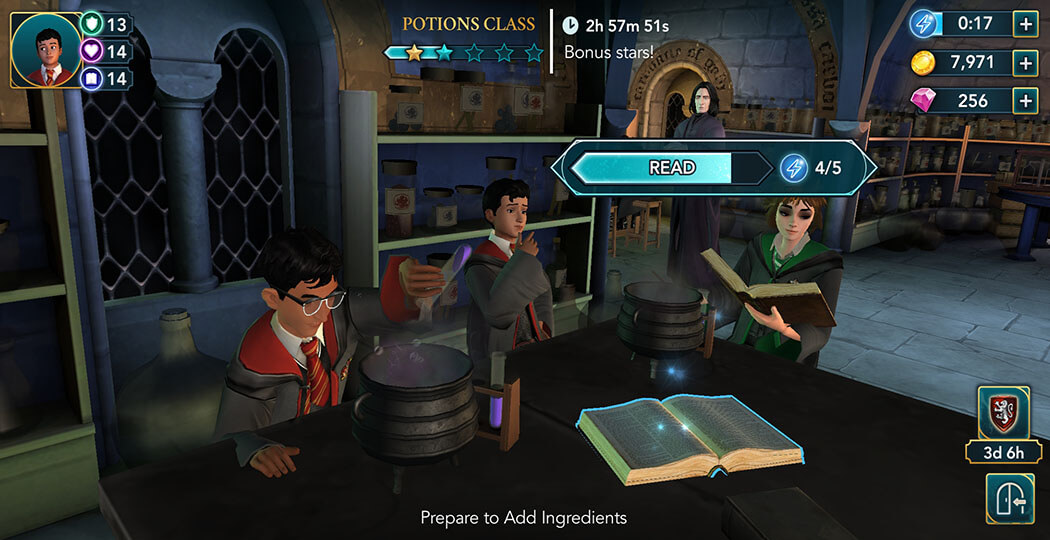 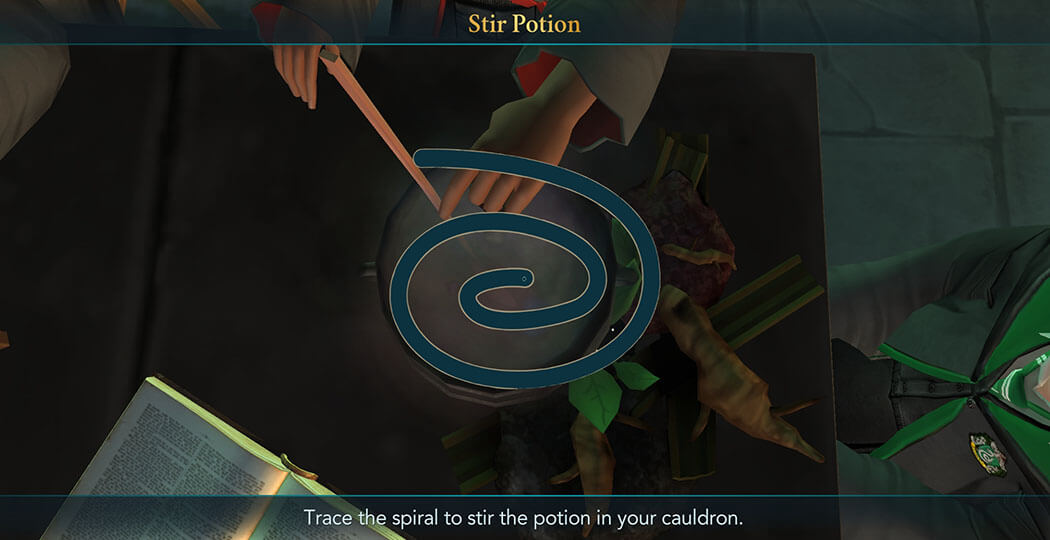 After the class is done, Snape will say that he searched through your dormitory and found some evidence there that ties you to the disappearance of certain ingredients which were stolen from the Potions Classroom. You obviously had nothing to do with that, but he is not so easily convinced. He’ll give you one chance to explain yourself. You can choose one of the two options. 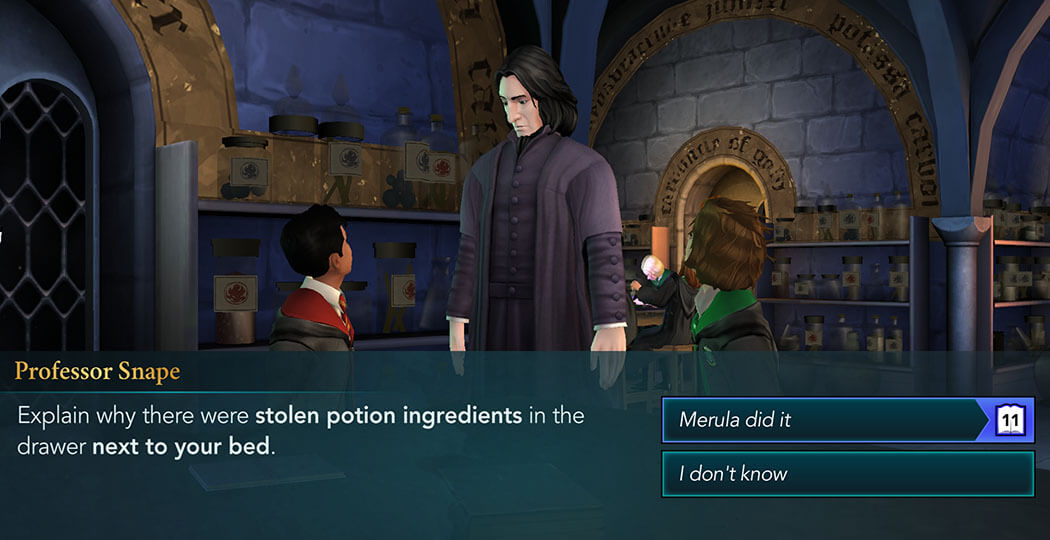 The first option requires you to have level eleven Knowledge and is highly recommended you pick this one. Not only you will get ten attribute points (compared to the five you would get by selecting the second option), but you will also avoid any punishment that Snape has in store for you. He will see through Merula’s lies and she will get what she deserves for trying to frame you. 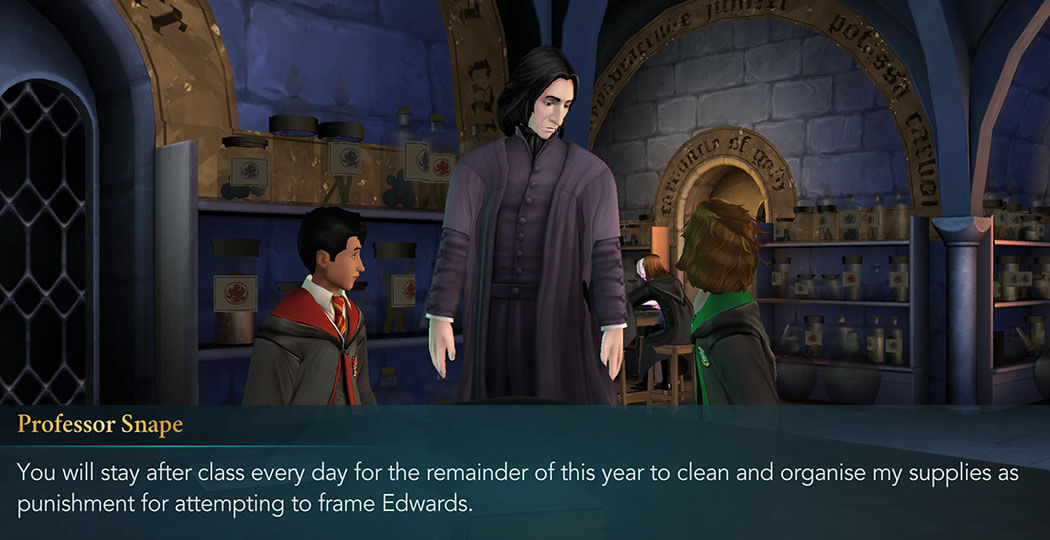 The next task is to visit Rowan in the Hospital Wing. There is, however, a three-hour waiting period before you can do so. You can either wait a bit or use some gems to speed up the process. In any case, once you are ready, hit the GO button and proceed there. 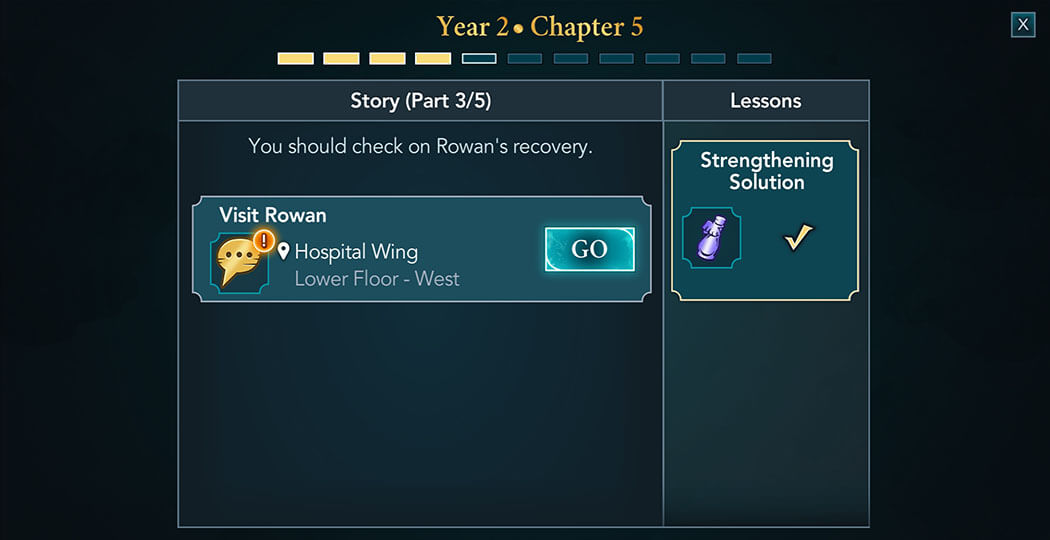 He will be very glad to see you, and after a bit of a dialogue, you will get a task to talk with him. It will require you to earn five stars within three hours, with one being needed to pass. 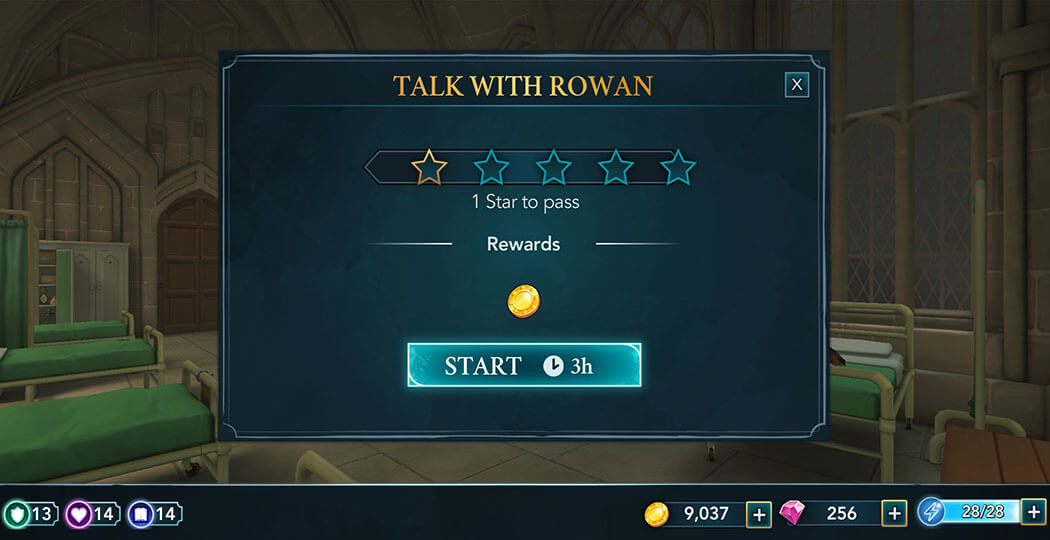 Once again, focus on doing actions with a high energy cost, and you will be able to complete this without much trouble. 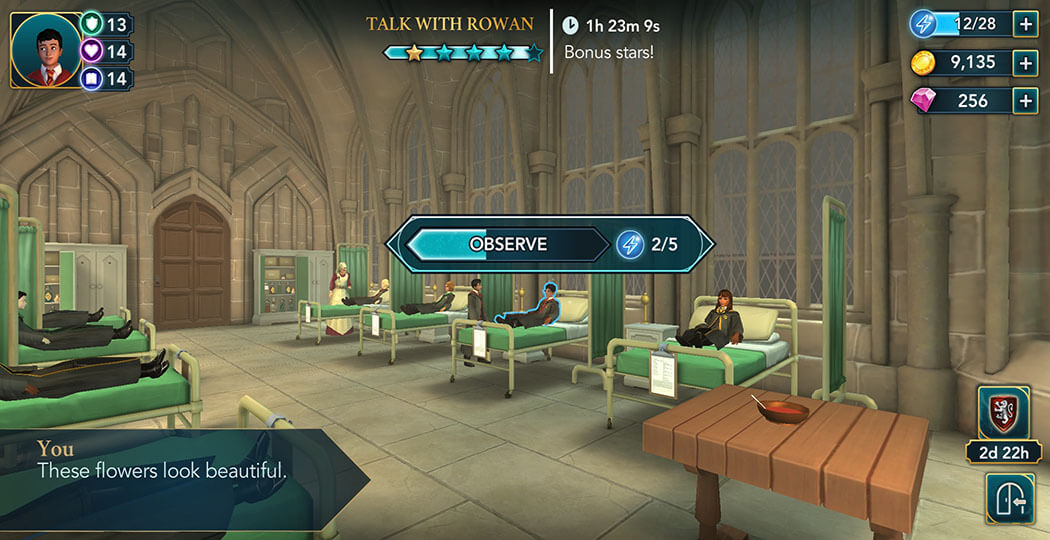 Afterward, he’ll tell you that he doesn’t want to go back to the Cursed Vault because he feels that he will be a burden to you. You can answer him in two different ways. 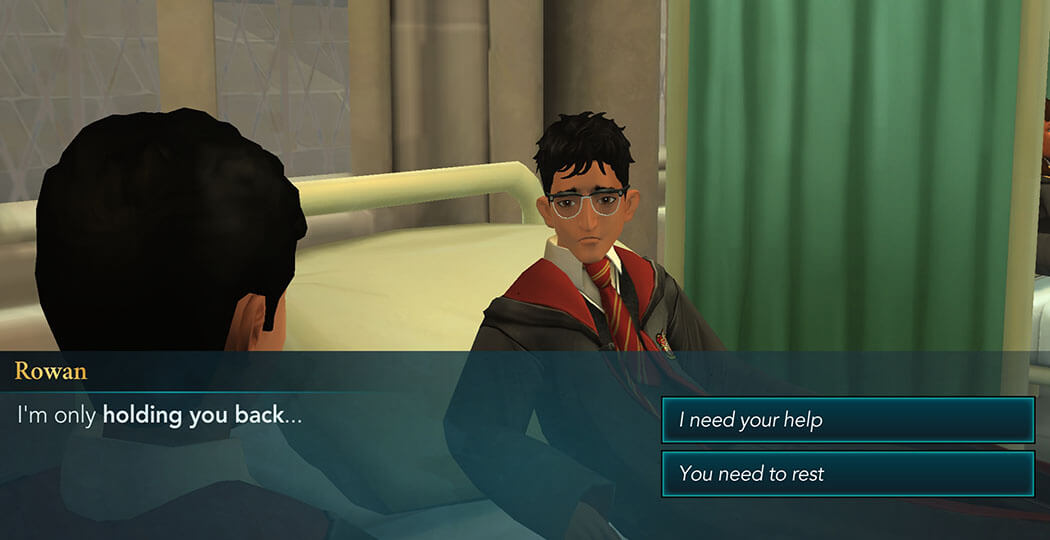 Each of the choices will award you with five points in a different attribute, with no major impact on the plot. Pick whichever option you find more appropriate for your character. For the next task, you need to attend the Flying class. Hit on the GO button and proceed to the Training Grounds. As soon as you get there, you will notice the speech bubbles above some of the characters. Tap on those if you are interested in what they have to say. 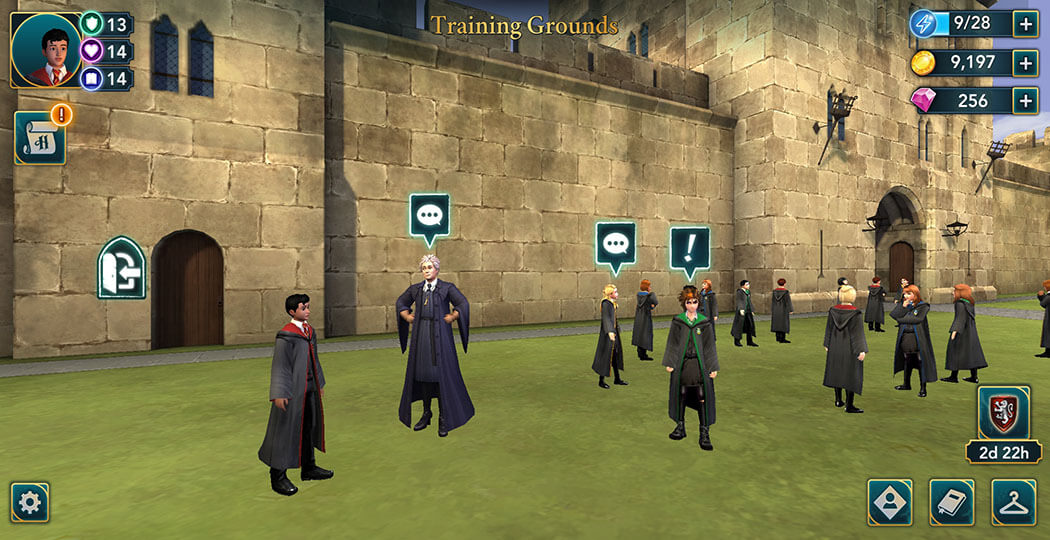 Once you’re done with that, tap on the exclamation mark to start the conversation with Merula. She will ask you the reason for your brother’s obsession with the cursed vaults. You have three response options. 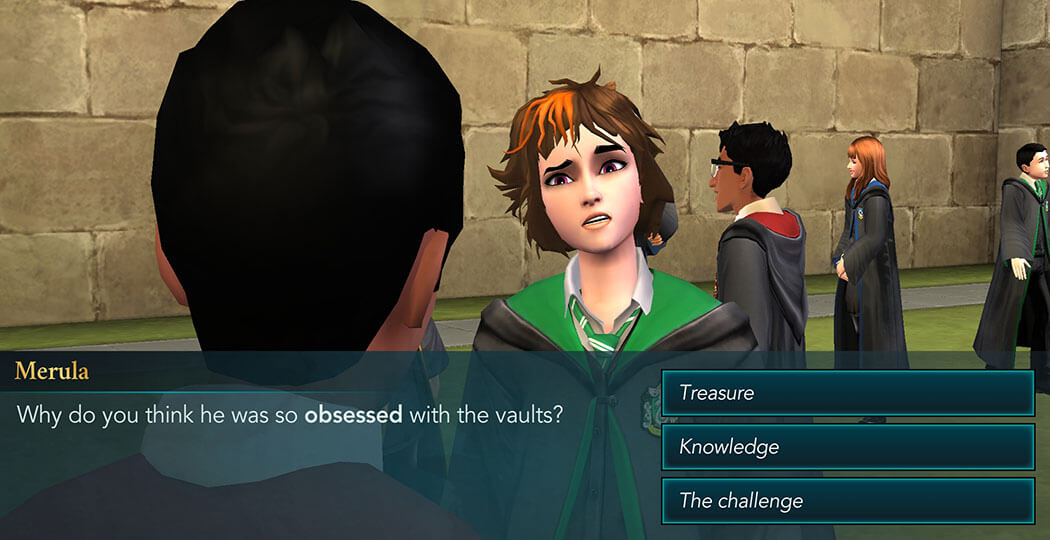 There is not much difference in the outcome, other than the type of attribute you will earn points for. She will claim to have some information about Jacob but will refuse to say anything until the class has ended. For this class, you need to earn five stars within one hour, but only one is required to pass. The good thing about it is that you can complete all five stars with one energy bar. In other words, you will get to choose a reward five times and will also be given five mini-tasks worth ten Courage points each. Try your best to succeed at these in order to maximize the attribute gains. 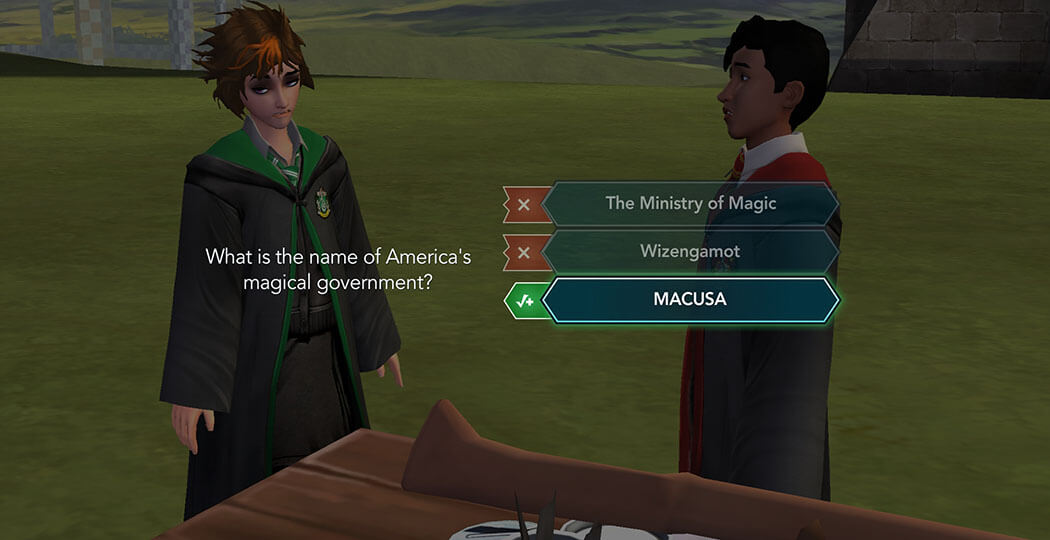 After the class is over, Merula will ask you to promise to tell her if you ever open one of the Cursed Vaults. 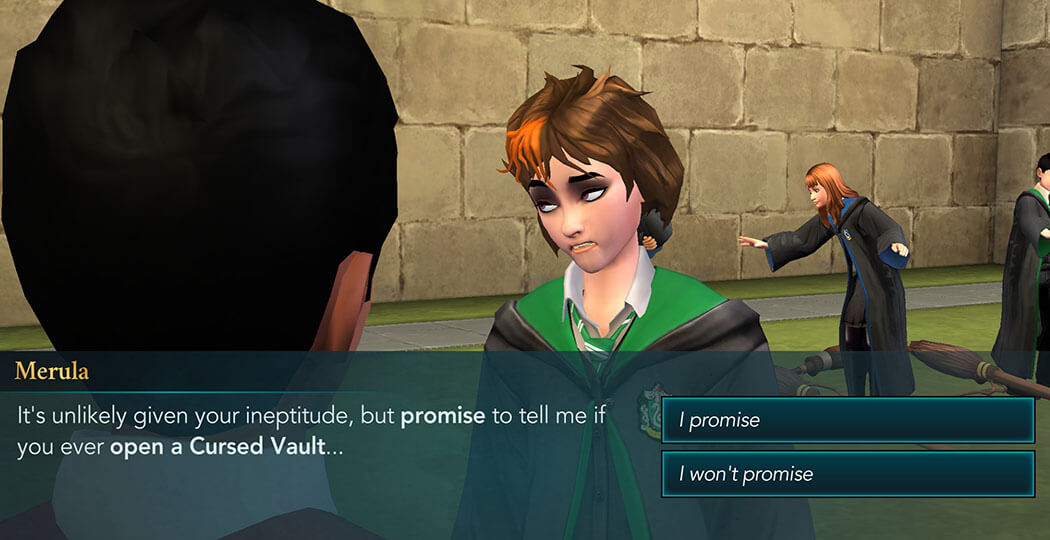 The choice is up to you, but either way, no matter what you select, she won’t reveal any information until you open one of the vaults. The next task is to meet with Rowan and talk over dinner. There is a three-hour waiting time before you can continue. Once you are ready, hit the GO button and proceed to the Great Hall. When you arrive, tap on the exclamation mark to initiate the conversation with Rowan. He will feel like he is completely useless, so it is up to you to lift his spirits and cheers him up! Tap on the handshake icon to open a task window. It will display the recommended attribute levels as well as the gold cost of this task. When you are ready, hit the Start button to begin. 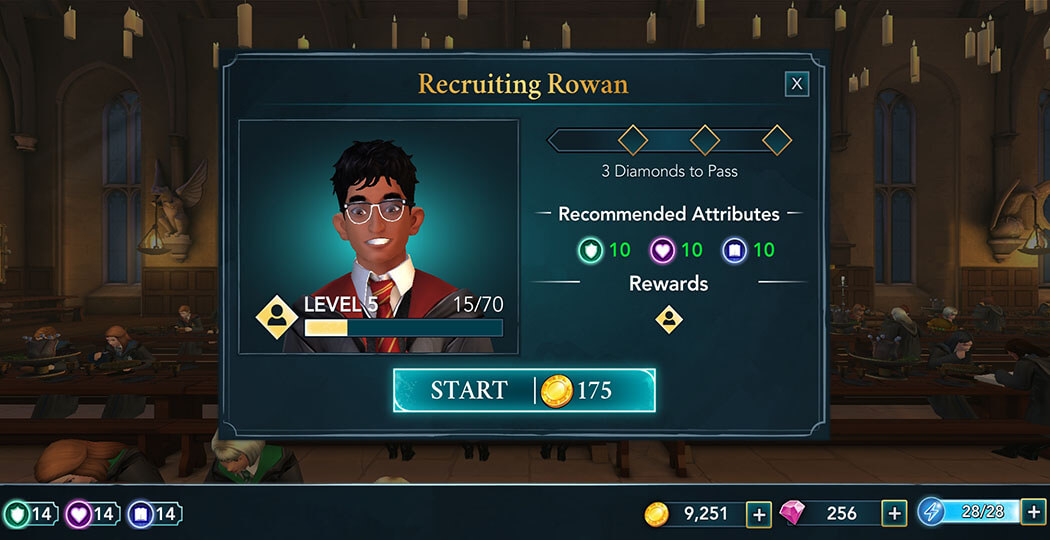 This is fairly similar to a meal with a friend. The goal is to select the answers that are friendly and supportive, and you should be able to earn all three diamonds in three or four turns. Below are some of the questions you can get as well as the answers to them. 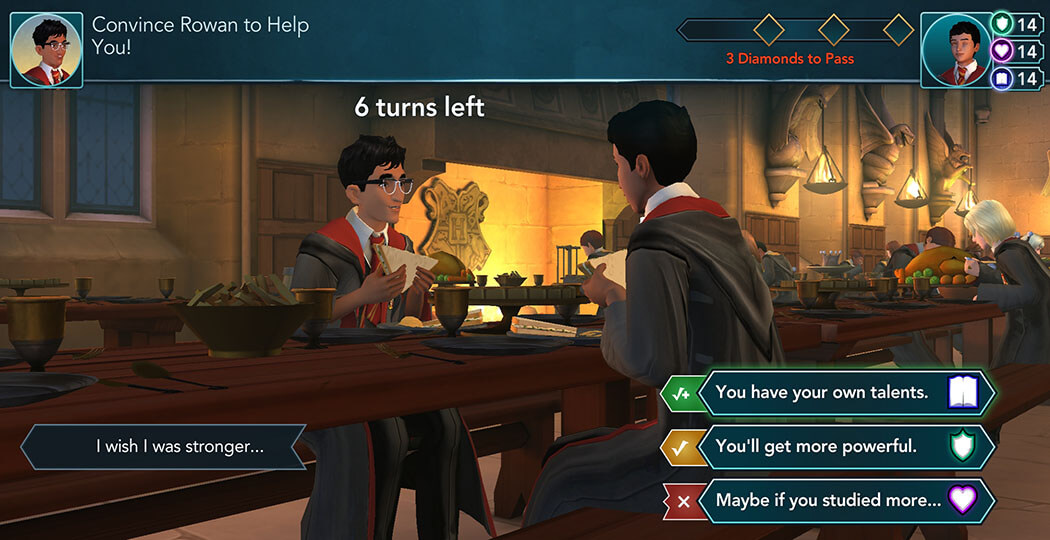 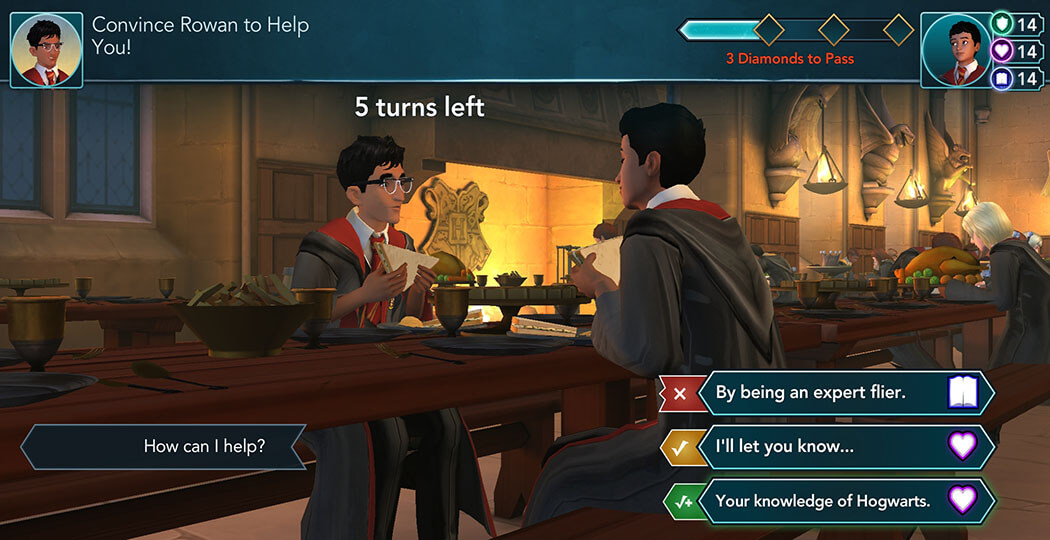 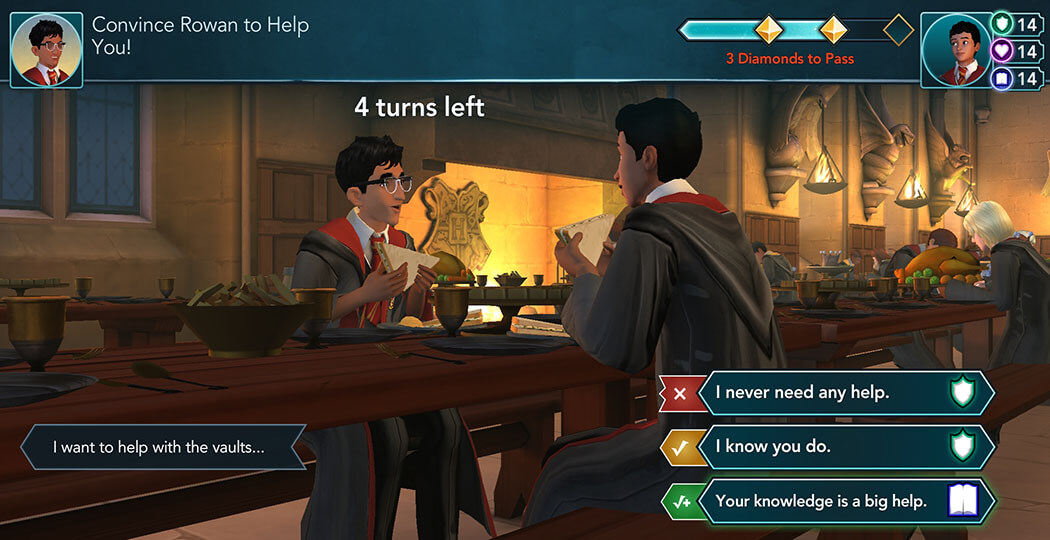 Rowan will feel much better after this conversation. He will also mention that he knows a student that could help you in your quest for the Cursed Vaults. That student is none other than Bill Weasley, one of the most gifted fourth-year students. After a bit of talk, you will have to decide how to approach him. There are three different options. 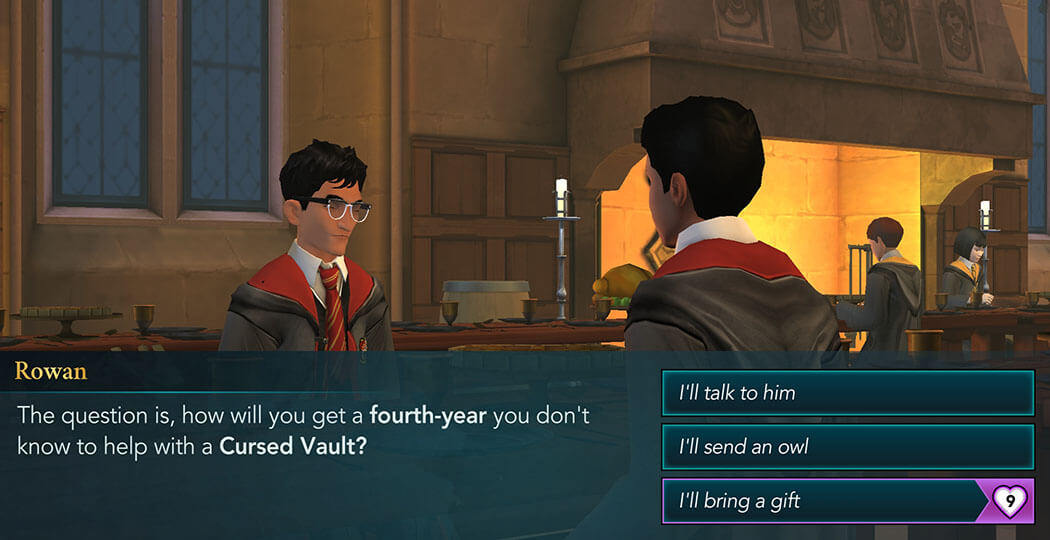 It is recommended that you select the third option if your Empathy level is nine or above since that one will give you ten attribute points compared to five you would get from the first two. Rowan will wish you the best of luck and that will conclude this chapter. 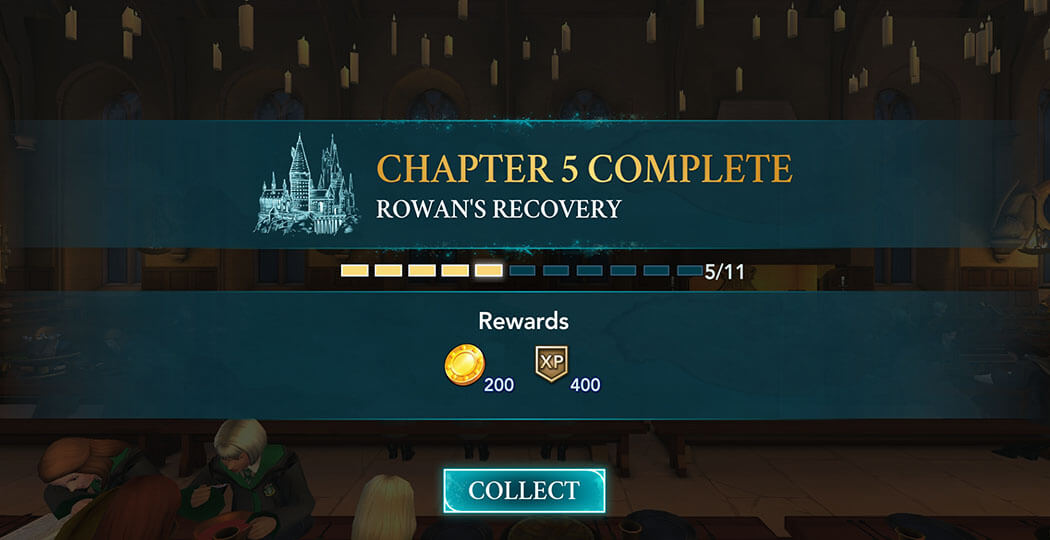 How did you like this chapter? What were your favorite moments? What choices did you make? Let us know in the comments below.

Thank you for reading and see you soon with the continuation of this exciting adventure!

You can check out our video playthrough of Chapter 5 HERE