Hello everyone, it is time for Chapter Seven of Year Two of our Magical Journey Walkthrough for Harry Potter: Hogwarts Mystery. In the previous chapter, you met and instantly befriended Bill Weasley. Without a flinch, he offered to help you with a whole cursed vaults situation. He trained you in order to improve your dueling skills. In the meantime, you helped Madam Pomfrey with gathering some medical supplies and treating the patient in the Hospital Wing. Also, Hagrid asked you to aid him with gathering the ingredients for the Fire-Breathing potion and you gladly agreed to help. After you got all the things he needed, you found out that his pup was trapped by the Devil’s Snare. You rescued the puppy and Hagrid was overjoyed. Lastly, you studied hard to prepare for learning the Fire-Making Spell. Bill helped you with that and after a bit of practice, you learned Incendio. It will surely be handy when dealing with the cursed ice.

Now is the time to continue where you left off. It is recommended that you focus on the lessons part of the chapter first. Hit the GO button and proceed to the Potions Classroom. 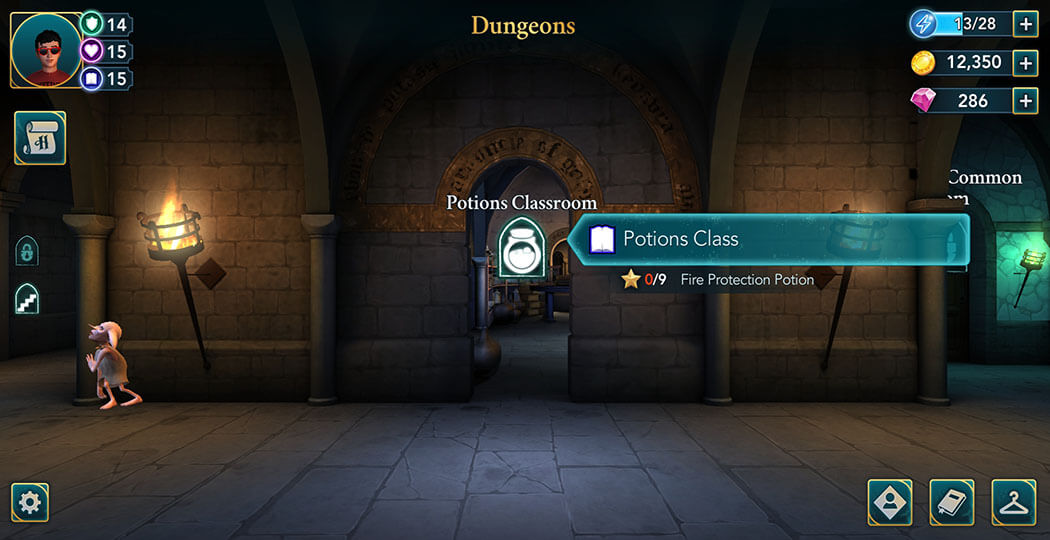 Unlocking Fire Protection potion lesson requires you to earn a total of nine stars from Potions class. The fastest way to do so is by completing two of the three-hour lessons. However, if you are interested in obtaining some additional attribute and house points, it is advised to do two of the eight-hour classes. Once you’ve made up your mind which class to take, hit the Start button to begin. 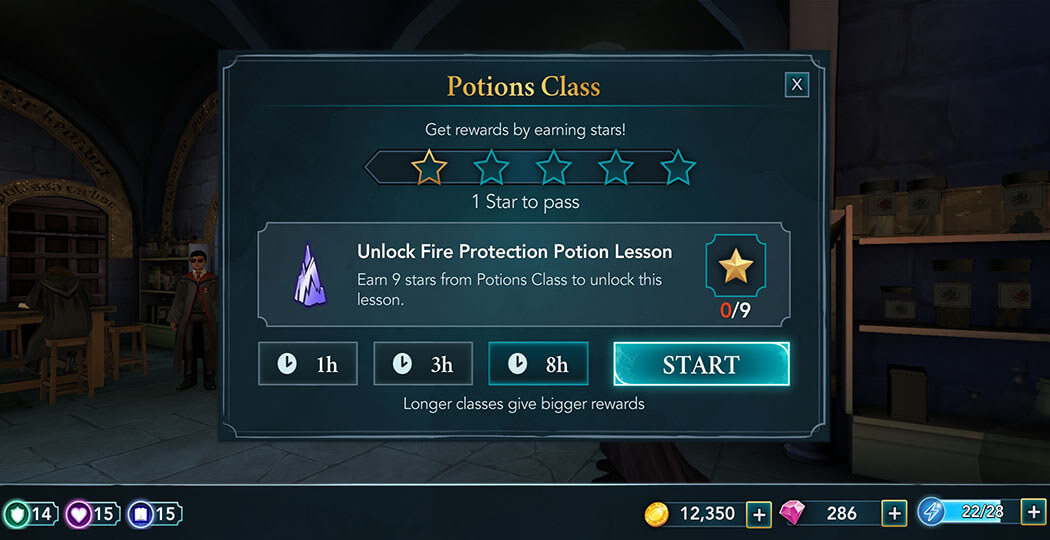 These classes should be done in the same manner as all of the other ones you did so far. Try your best not to waste any energy and you should be done quickly and easily. 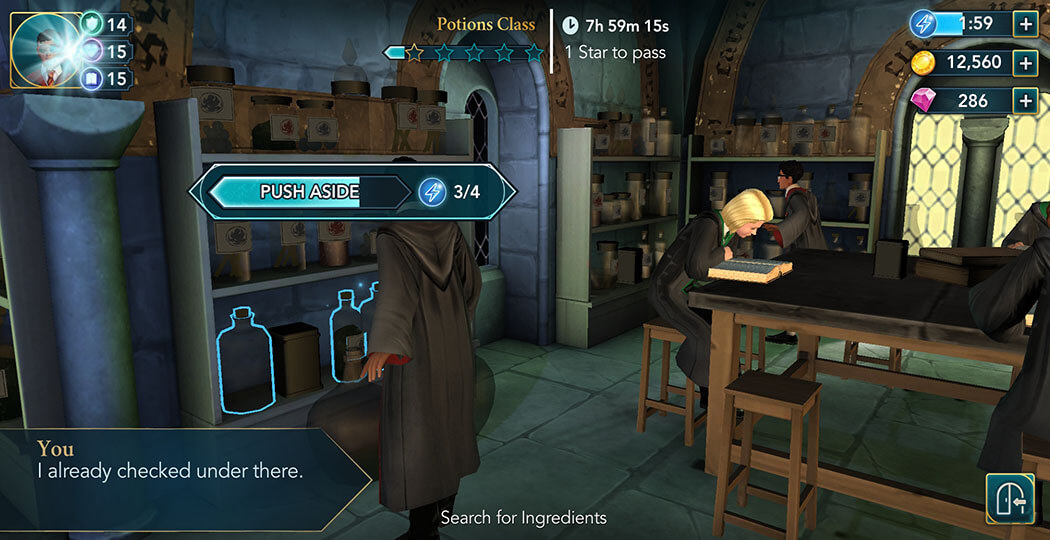 And do your best to complete the mini-tasks in order to maximize the attribute points gained. 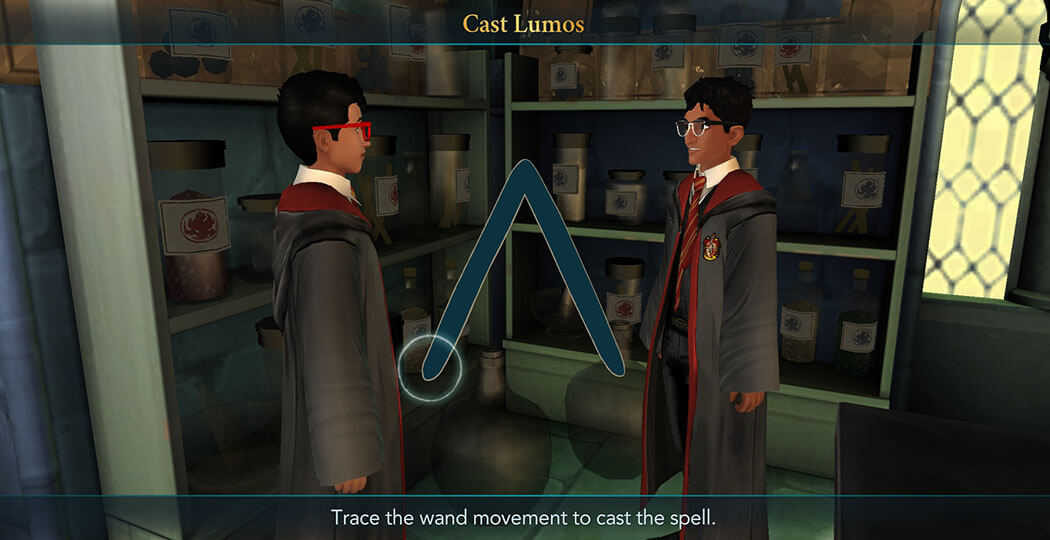 Once you’ve obtained all nine stars, head back to the Potions Classroom. To complete Fire Protection potion lesson, you need to earn five stars within three hours. Since all of the stars are required to pass, it is recommended to have full energy when starting. 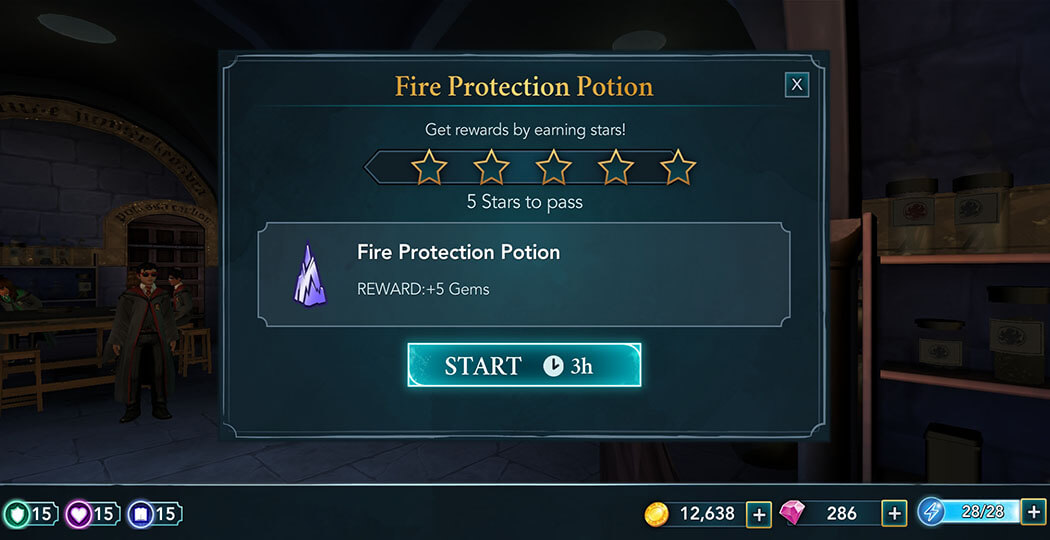 There is nothing special about this lesson, just do it same as any other and you should have no problem completing it in time. 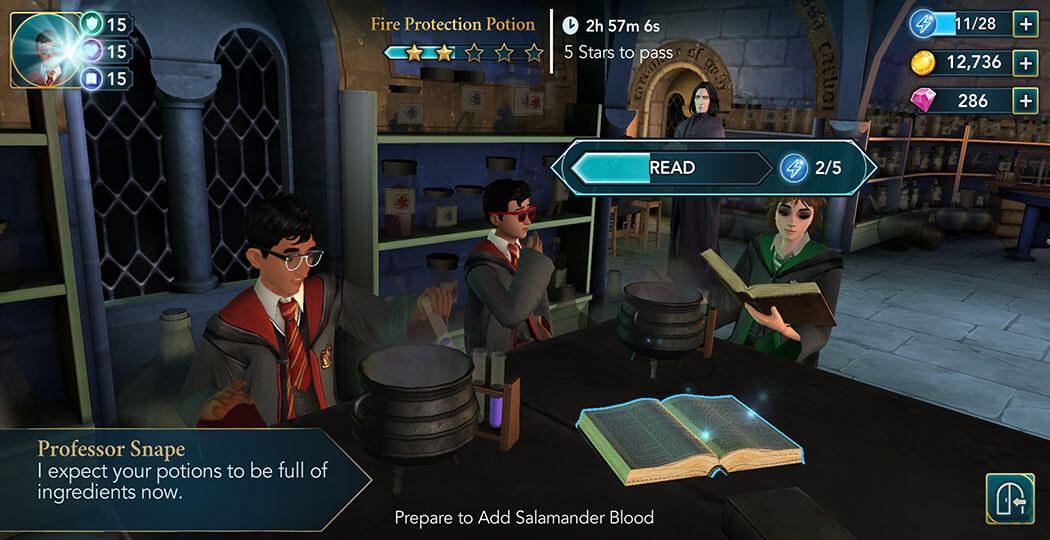 Once you obtain all five stars, it’s time to complete your potion. Trace the path on the screen to successfully finish Fire Protection Potion. 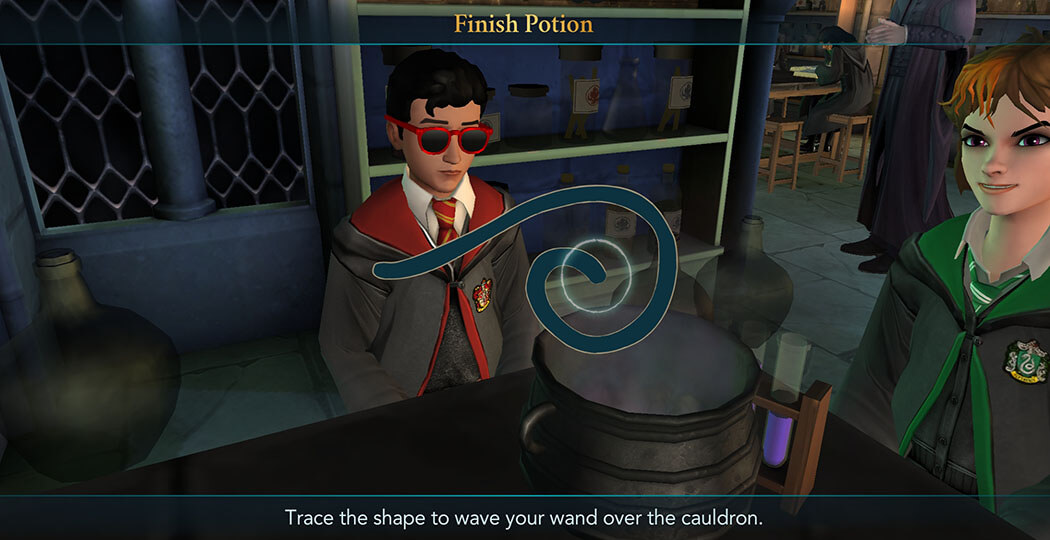 Congratulations! You learned how to brew the potion that could potentially save someone’s life. Hit the Collect button to claim your rewards and continue. 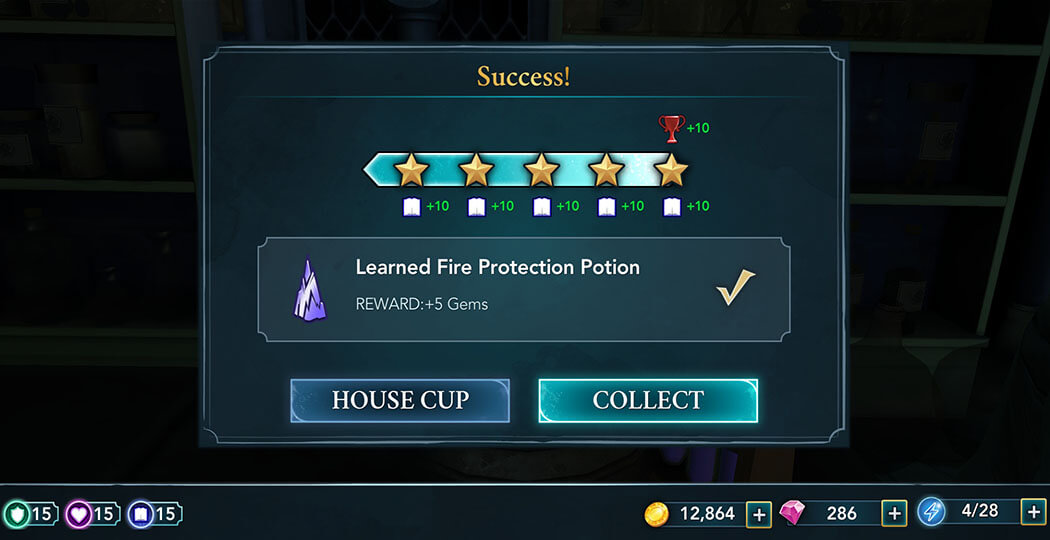 Now that you’re done with the lessons part of the chapter, you can continue with the story. Hit the GO button and proceed to the Corridor to meet Bill. 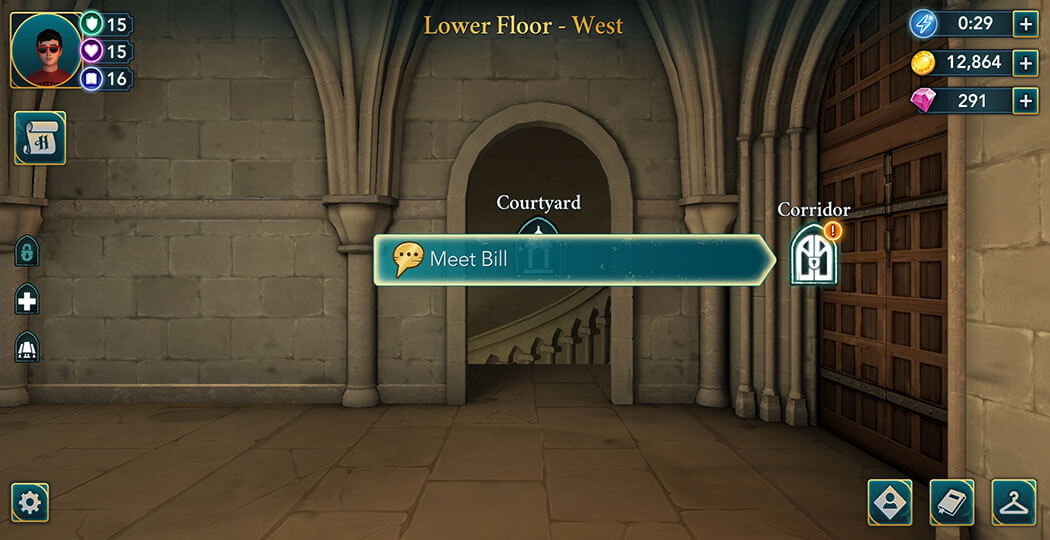 You’ll find him standing near the vanishing stairs, and after a bit of talking, you’ll decide to go to the cursed vault. Bill will be both surprised and fascinated when he sees the ice. 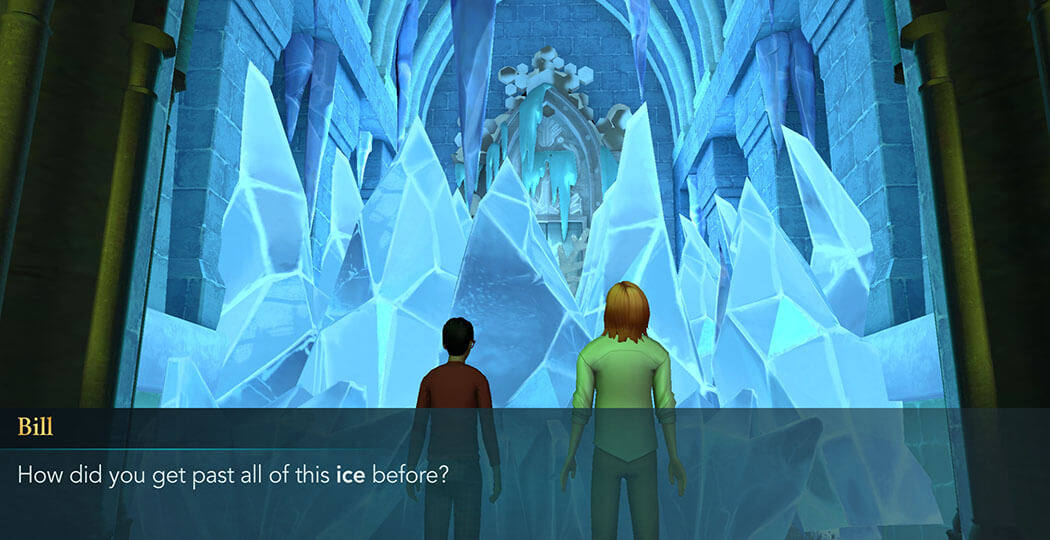 It seems that there are some walls of ice preventing you from reaching the door. You have to think of a way to remove it. There are two options you can choose from – Incendio or Flipendo. 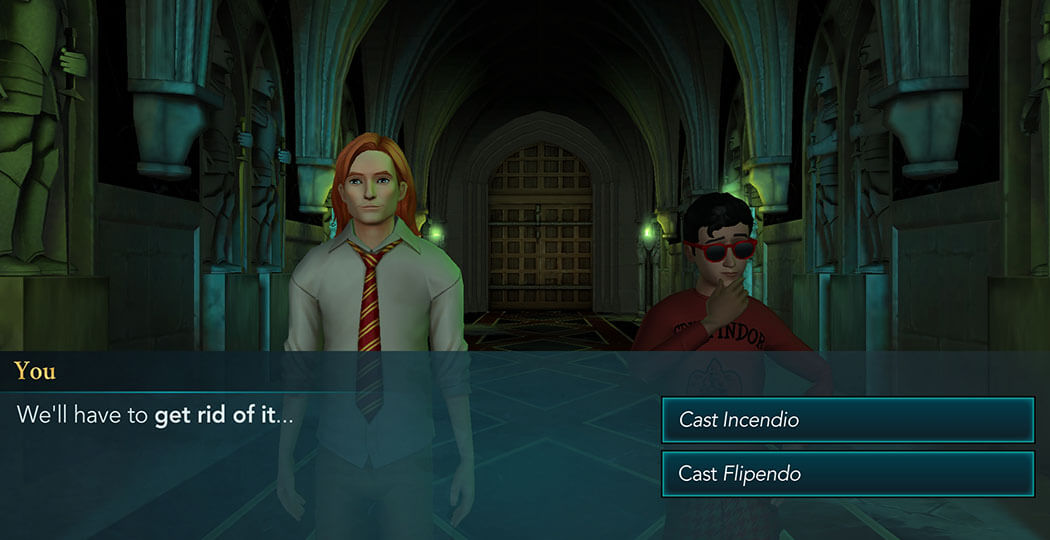 Both of the spells are equally as effective for this task, so pick whichever one you prefer. Also, each option will give you five attribute points. After you’ve made up your mind, you’ll have to cast the chosen spell three times in order to break all of the ice walls. 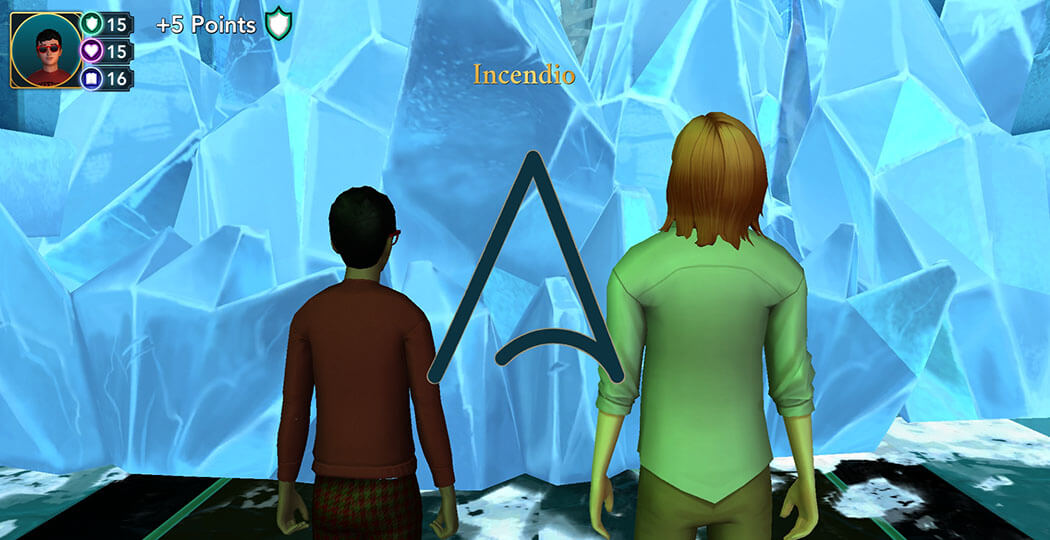 After you’ve dealt with that, the way to the door will be clear. Now is the matter of breaking the ice surrounding the door itself. This task requires you to earn five stars within three hours. Pretty standard you’d say. But there is a catch. Once you begin it, you can’t leave the room until you’re done. Because of that, it is extremely recommended to have full energy prior to starting. When you are ready, hit the Start button to begin. 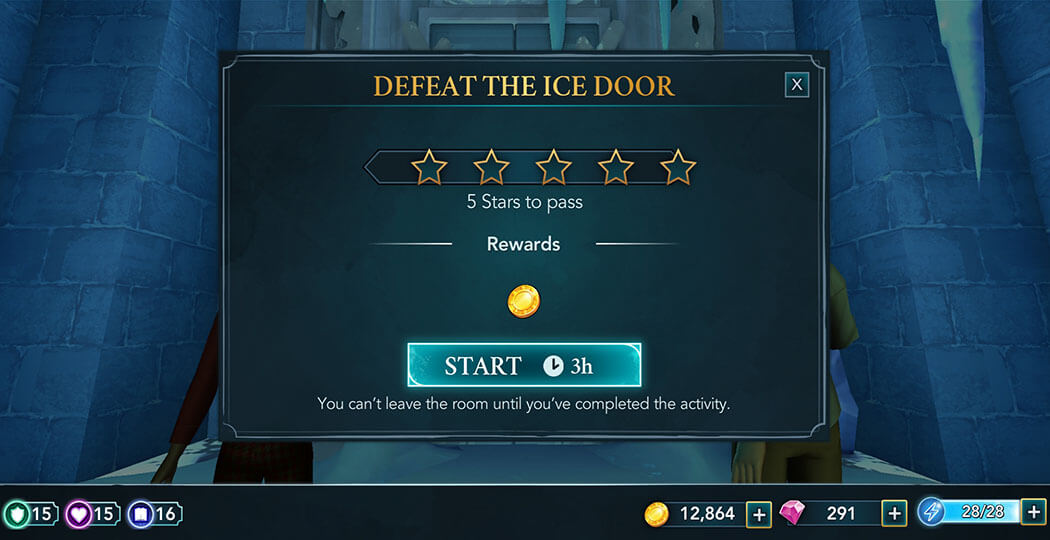 It will take you somewhere between fifty and fifty-five energy on average to complete this task. As always, prioritize the actions with a high cost. This will fill up the star meter much faster and in return save you some energy. 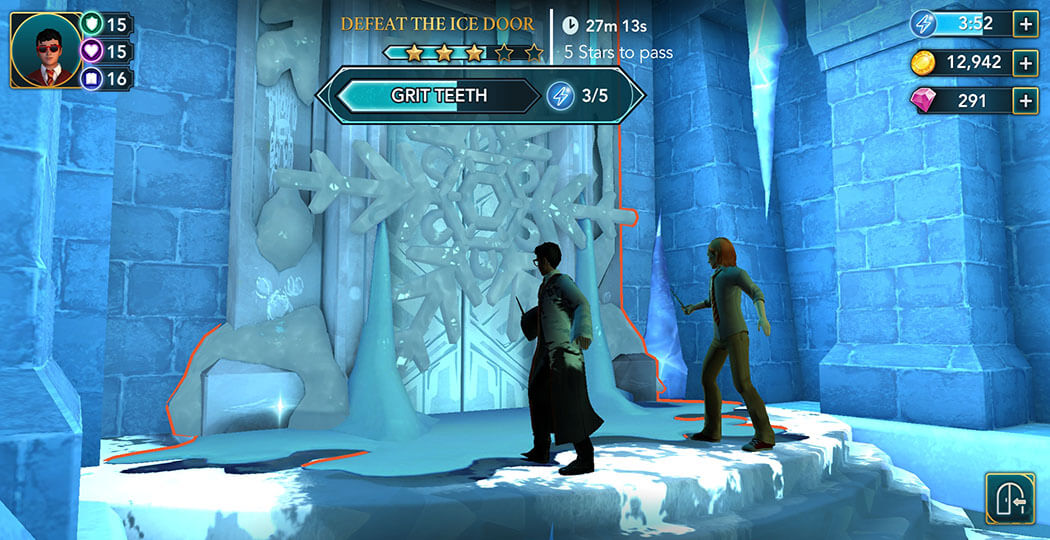 Once you obtain all five stars, hit the Collect button to continue. 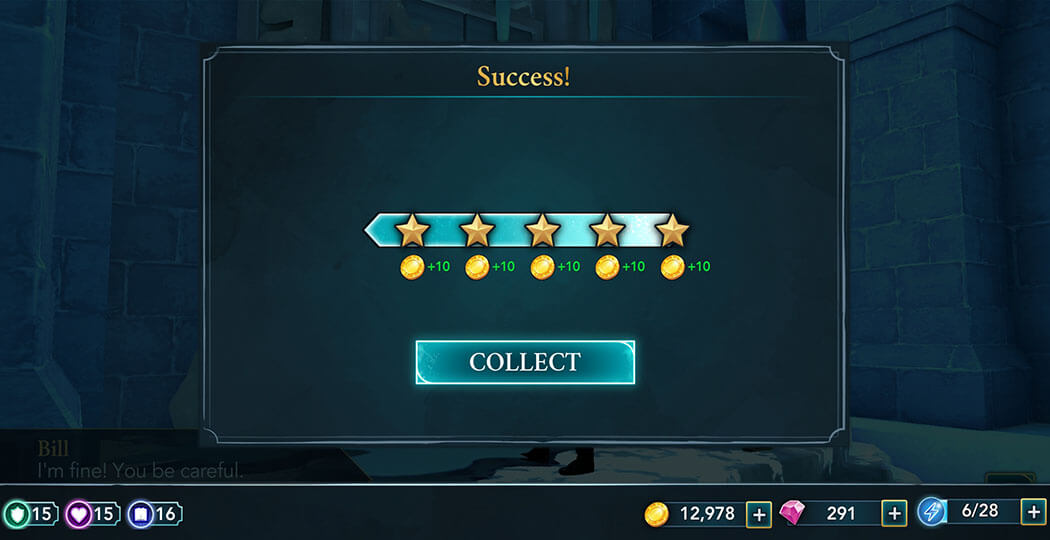 As soon as you’re done, poor Bill will get hit by the cursed ice which will render him completely immobile. Since there is no time to get any help, you’ll have to cast the Fire-Making Spell to free him. 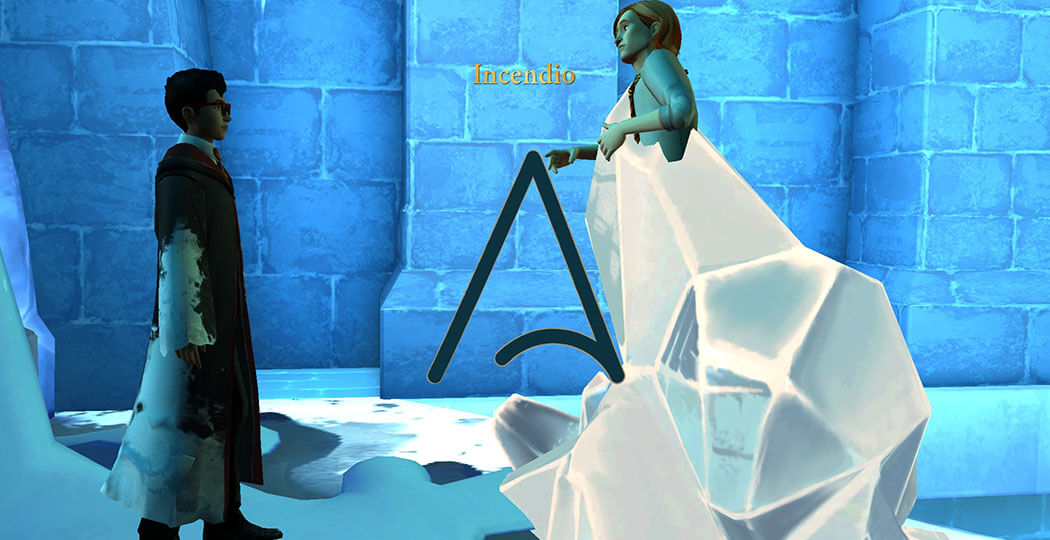 The spell will work and Bill will be freed from the ice. Regardless of not being physically hurt, it appears that most of his strength was drained by the ice. You can react in three ways. 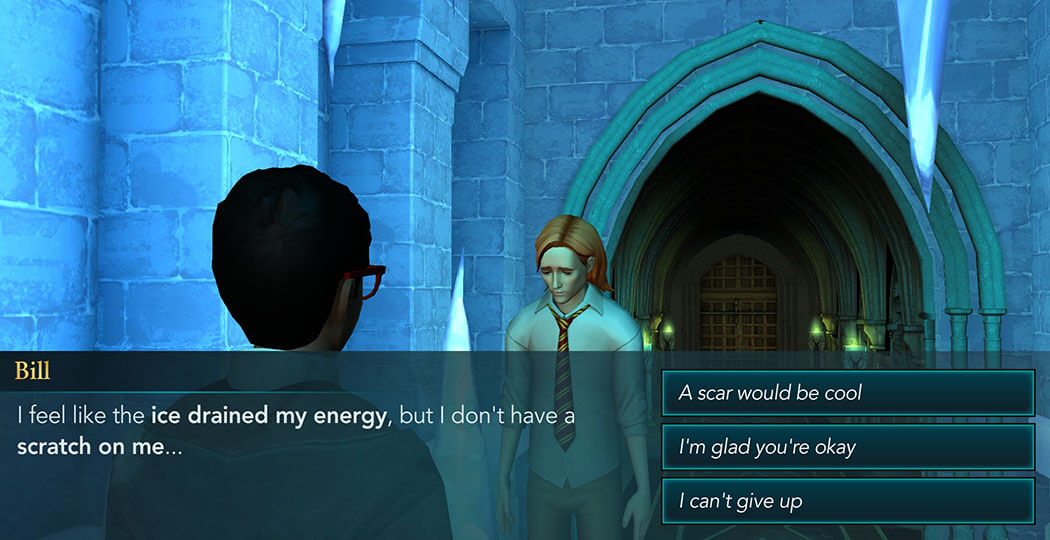 Each option will award you with five attribute points, but it won’t affect the outcome. You’ll decide that the best thing to do is to get out of there before you freeze to death. With this, the chapter will be completed. Hit the Collect button to claim your rewards. 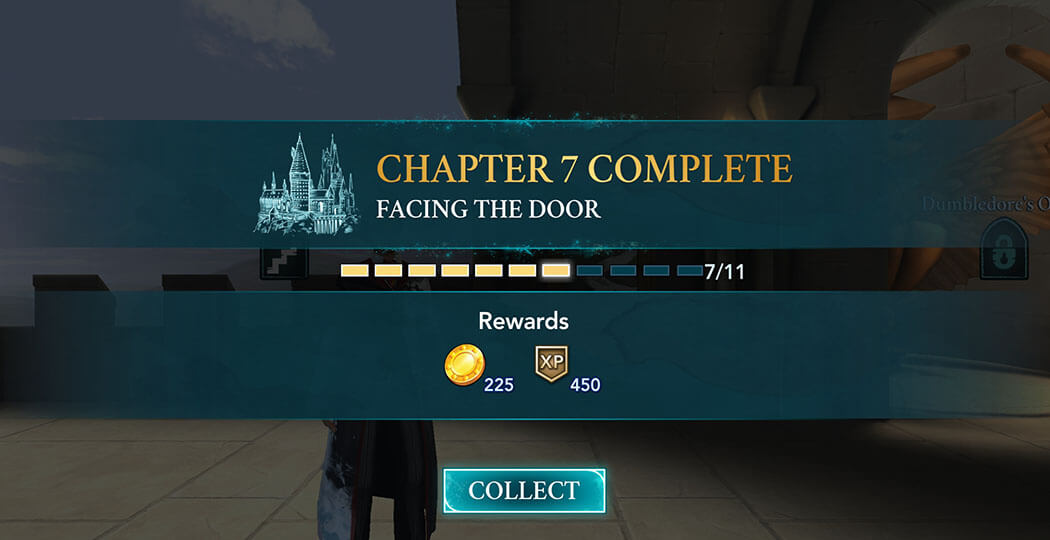 Now that was one exciting chapter. How did you like this one? What were your favorite moments? Which spell did you use to get rid of the ice walls? Let us know in the comments below.

Thank you for reading and see you soon with another awesome chapter of our Magical Journey!

You can check out our video playthrough of Chapter 7 HERE