Luigi’s Mansion 3 release date passed us by just a couple of days ago, on Halloween, and already it’s being called the funniest and most charming game on Nintendo Switch, yet. It is the third installation of what is now a critically acclaimed and commercially successful franchise which naturally features the taller of the plumber brothers, Luigi, and his ongoing battle against ghosts and otherworldly beings. This title is said to be hilarious and quite captivating so we had to check it out.

This title was developed by Next Level Games, which is an award-winning indie video game studio from Canada founded in 2002. They’ve worked within the franchise before on Dark Moon for Nintendo 3DS. Luigi’s Mansion 3 reviews are generally favorable all over the web, accounting for the largest publications out there. Its scores range around the upper 85-95% of the score meters all around.

Instead of an actual mansion, Luigi and his friends are this time checking into a glamorous hotel. The gang is comprised of Mario, Princess Peach, Toads, and Luigi’s ghost pet dog Polterpup. They have been invited to stay at this luxurious hotel, called the “Last Resort” (nothing suspicious there), and their benefactor chose to remain anonymous. Naturally, it turns out the entire spooky hotel is haunted big time and it is much more than meets the eye. The glamour is replaced by paranormal events, its spacious corridors with entire worlds and other dimensions, and its rooms are now filled with ghostly beings. To add to the misfortune, all Luigi’s friends get trapped inside ghostly paintings and pulled into another dimension, while Luigi is left to his old tricks to try and deal with the ghost infestation and rescue Mario and the rest of the gang. 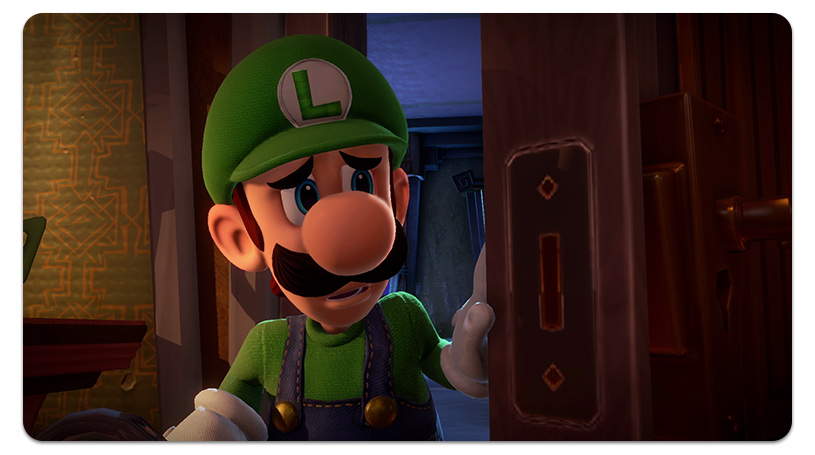 Luigi’s mansion is described as an action-adventure but in its core it a platformer game that exploits its 3D environment to the fullest. It is played from a fixed third-person view i.e. perspective. Also, being in a haunted hotel is something the gameplay thrives on as the environment plays a large part in the experience.

The player will have all of Luigi’s old tricks available, like his flashlight with which you stun and disable ghosts, and his Poltergust G-00  to suck them in. However, there are some new additions as well, like a brand new character Gooigi, which is a clone of Luigi made out of goo. The player can use Gooigi to access otherwise inaccessible places, where it is dangerous to go, and even to spring up traps and some systems while Luigi stays safe.

The game features a single and a multiplayer mode. In single-player, the user gets to dig into a fifteen-or-so hour-long campaign where you never do the same thing. There are only several types of ghosts, but thanks to the cleverly developed environment, you always have to develop new ways to trap them into the Poltergust G-00. The hotel is filled with passageways to other dimensions with no respect for physics at all, so you can enter a room and find a beach there with the sea and the endless sky with stars. Also, there are secret rooms and puzzles all around and Luigi can use the Dark light mode on his flashlight to reveal secret doors.

The environment truly plays the part in the latest installation of the trilogy, as it is modeled to perfection. Just the right combination of lighting, textures, animations, and settings gives this game an incredibly well-developed atmosphere. This, in turn, makes the experience immersive beyond measure and adds to the puzzler and platformer part of the whole experience.

Luigi’s Mansion 3 Nintendo Switch is already a hit game, with Next Level Games hitting the bull’s eye with this one. The experience is so immersive, so eye-catching, and so incredibly fun that the only thing that will cut the fun is the 15-or-so hour-long campaign length. But, that’s where the multiplayer modes come in, and there are several of them to enjoy. Up to eight players can co-op in the ScareScraper mode, or you can also try team matches in ScreamPark, and more. This third installment of the series is the best one yet and an absolute hit for Switch this fall.

The experience is so immersive, so eye-catching, and so incredibly fun that the only thing that will cut the fun is the 15-or-so hour-long campaign length. But, that’s where the multiplayer modes come in, and there are several of them to enjoy.