FoxNext is working really hard to maintain  MSF importance over the other Hero-collector games, but unfortunately, I don’t think they are on the right track. MSF is almost 2 years old and it is natural that the game starts to lose the player’s database if there is nothing new on the table. I don’t believe that FoxNext understands what they should do to breathe new life into the game and regain lost players since they are not actually bringing anything truly new in this update. Here is the list of changes in this Update:

As you can see the only true changes are introducing new Heroes (like in every Update) and opening new permanent Ultimus 7 Raid.

The current pace of bringing new Heroes into the game is unbelievable and only the whales will welcome this strategy because ordinary players simply cannot keep the pace and must decide what Heroes they will abandon for good in order to maximize others. This was not the case in the first year of Marvel Strike Force and I am getting the impression that all new things are made only for p2w players. I hope that FoxNext will realize at some point that once ordinary players leave the game, whales will not have a motivation to play anymore and that this will happen soon if they don’t change their strategy.

For example, most of the Alliances mastered Ultimus 6 Raid long ago and they were all looking forward to starting Ultimus 7. But the current Ultimus 7 is not the same Ultimus 7 we all played 2 months ago when Legion of Cabal and Pants of Hulk divided the first place for clearing the Raid first. Ultimus 7 that got released in the last patch is 50% more difficult than the Ultimus 7 we all expected and played. I am in a casual, fully filled alliance with the average collection power of 3.7 million and we cleared 66% of Ultimus 7, 2 months ago. Today, after using all healings we were able to clear only 43% despite all Alliance members opened Ultron and thought that we are prepared for the new Raid. I am not saying that much stronger alliances then ours don’t exist, but I ask myself is there any point for a new player to even start this game since every member of my Alliance logging in every day for at least 18 months and we are not even close to clearing the new Raid.

I really like this game and I am not happy to criticize it, but I think that is the only way to eventually reach FoxNext and explain to them that the game will die if they don’t do something different.

In this Update, 5 new Heroes are introduced but only 3 – Ghost Rider, Elsa Bloodstone and Hela can currently be seen in the roster. Stryfe and Mister Sinister Sinister will come in the following weeks.

Ghost Rider is a Top Tier Hero for sure. He is the much stronger version of Pyro and we all know that Pyro can be very dangerous. Ghost Rider has the unbelievable damage output and he can use his assassination/piercing-based ultimate for free whenever an ally dies meaning that Ghost Rider needs to be killed first if you don’t want him to utterly destroy your team during the battle. Ghost Rider has obvious synergy with Supernatural Heroes but he can also be used in other combinations as well. He is currently available through Offers and Milestones meaning that you will have to buy him for $100 if you want to see him in your roster immediately. 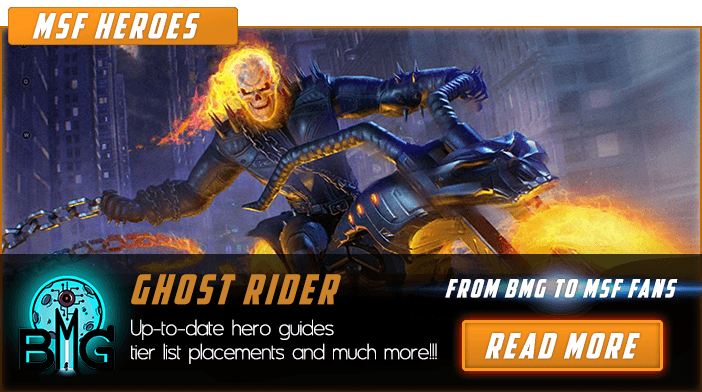 Elsa Bloodstone is another Supernatural Hero. When you know that other Supernatural Heroes are Scarlet Witch, Mordo, and Doctor Strange, you quickly realize that those Heroes will now have an important role in Alliance war since all of them haven’t had a major synergy before. Elsa is a Blaster that harasses her enemies with constant heavy damage and she is particularly effective against injured enemies and enemies who dodge or are missed by Elsa’s ally. Elsa’s full potential can be reached only in a full Supernatural team and that is the reason why she should not be considered as Top Tier hero. Elsa will be available through the Elsa Bloodstone Event Campaign. 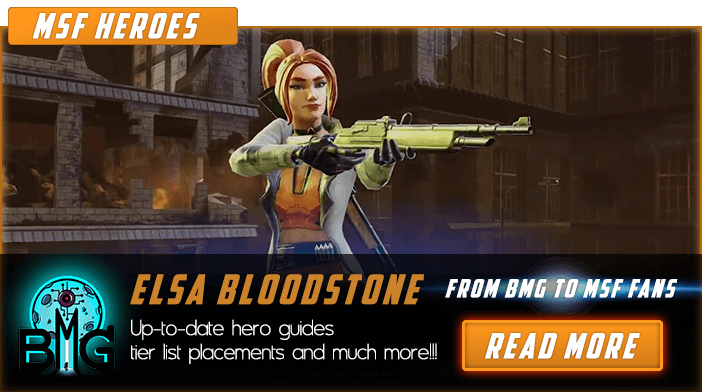 Hela is a new Asgardian Controller. She has a very interesting skill-set. It could be said that her game mechanics is not like anything we could see until now. In short, she prevents enemies from using Deathproof, she applies Disrupted and she can spread up to 4 negative effects from primary target to the rest of the enemy team but what really sets her apart from other Heroes is her summons. She summons Undead Asgardians that are really nasty and practically can not be cleared from the battlefield as long as Hela is alive. That is because she summons another Undead every time a summoned Undead dies. Having a constant summon on the battlefield which assists Hela and can inflict serious damage is something that will definitely annoy all players. However, as long as there are only 3 Asgardians in the game and one of them is current Thor, Hela’s importance in the game will be minimal. The way of obtaining Hela is currently unclear. 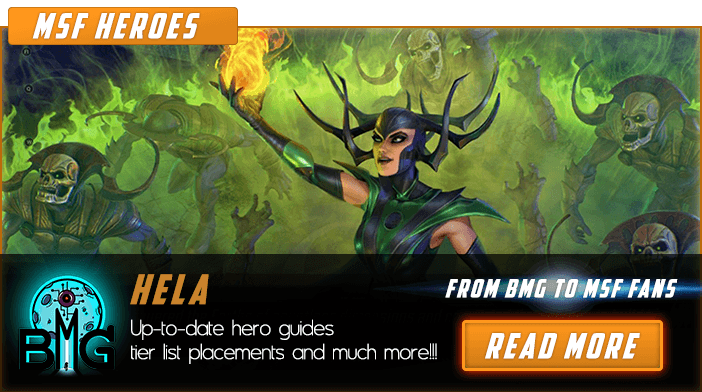 Stryfe and Mister Sinister can not be seen in our rosters yet but I will give you some unofficial data.

Stryfe is a very powerful Mutant Villain who will be able to apply Ability Block to primary and adjacent targets and be under Deflect and Barrier when he Taunts. With his basic ability, he will be able to clear the enemy’s Taunt and to apply Taunt on himself meaning that he will be the Protector with the longest Taunt in the game. He will be definitely a nice addition to Mutant Villains combined with Mister Sinister and those who lost their place in Meta teams like Pyro, Sabretooth, and Mystique.

Mister Sinister is another Mutant Villain who has a great synergy with characters with a new Marauder trait. Those characters are Mystique and Sabretooth and it is obvious that we will have another highly usable Alliance War team made of Stryfe, Mister Sinister, Mystique, Sabretooth and possibly Pyro. Mister Sinister will be able to clone some of his allies who will be able to use all skills as a cloned ally but whose stats will scale with Mister Sinister stats. He will also be able to transfer all positive effects from Mystique to all Mutant allies and to heal the entire team for a decent amount of Health. His basic skill will be particularly strong since its damage will scale according to the number of Marauder allies and it will be always assisted by Clones and Marauder allies. Mister Sinister will be especially effective in Alliance War Defense where he will grant increased Max Hp and ability energy to all Marauder allies.

As you can see, all of the new Heroes have a role to make some of the Heroes that stopped being interesting (Scarlet Witch, Mordo, Doctor Strange, Mystique, Sabretooth) become usable again. I must say that is nice but I don’t think that a lot of players will be able to maximize all those characters before FoxNext introduce us with new, more important Heroes if they continue with this pace of releasing new toons.

After the last Update, I entirely predicted what new Heroes will enter a fray but today I will avoid further predictions so I can suggest FoxNext to release a new Campaign where we will be able to farm some characters like Human Torch, for example, that aren’t farmable at the moment. That would be the right direction if they want to keep the game alive. But truth to be told, that is just a first step because Marvel Strike Force needs an entirely new game segment that will bring back players who are rightfully bored with the game and with repetitive, dull battles over and over again.

I hope that someone will listen to reason and see the bigger picture before it is too late. Until then, good luck Heroes and may the RNG be with you.