After a tumulus start, Sony finally revealed when Masters of the Universe reboot is going to start filming. Based on the Production Weekly on Twitter, the principal photography is to start this July in Prague with Aaron and Adam Nee at the helm.

Masters of the Universe is the story of Prince Adam of the planet Eternia who possesses a magical sword which turns him into a powerful hero He-Man. He is up against the evil sorcerer Skeletor and his forces who want to conquer and rule Eternia. The series features a wide range of characters which fans adored and eagerly collected as action figures.

Adam also has a twin sister Princess Adora who also turns to a heroin She-Ra with a magical sword but she lives on planet Etheria and fights Evil Horde lead by Hordak who kidnapped her from Eternia as a child to serve as his captain before He-Man saved her.

With all the ‘80s vibes we like to enjoy in the 21st century like Stranger Things, a continuation of Star Wars and rebooting of old shows like Magnum PI, we are starving for more. Even though some reboots are not that good or even terrible (I’m pointing at you Dirty Dancing), we simply love those 1980s when cell phones were science fiction and everything seemed full of imagination.

Mattel’s Masters of the Universe or how many of us called it He-Man fit perfectly into that sentiment. This was a franchise which included animated series, a movie and action figures. After a decade of pause in the 1990s, Mattel re-released replicas of the action figures and episodes of the series, both He-Man and She-Ra. 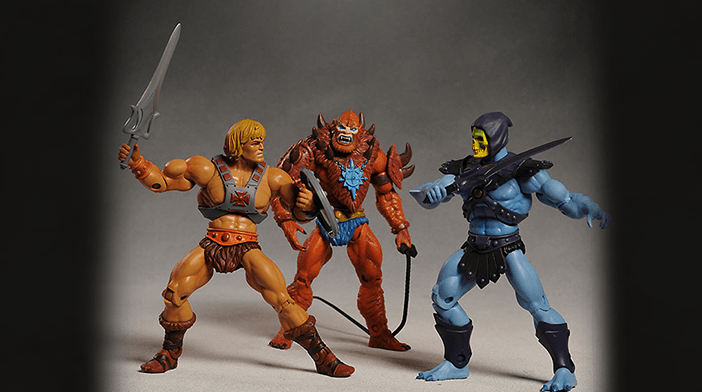 In 2002, Mattel released a new line of toys consisting of 60 action figures and even developed small ones for McDonald’s Happy Meal. This was also followed by the new animated series which had 39 episodes with the final one aired on Cartoon Network’s Toonami in 2004. In 2002, Taniko developed video game He-Man: Power of Grayskull based on this series for Game Boy Advance, and in 2005 Savage Entertainment developed a sequel He-Man: Defender of Grayskull for PlayStation 2. Image Comics and MVC published comic book series from 2002 to 2005 which actually added a story to the new animated series.

The new toy line was introduced in 2008 at San Diego Comic-Con and it was King Greyskill. Then came mini-comics in 2012 published by Dark Horse Comics and anthology books published by Dark Horse Books which were about the art and characters mostly. Chillingo and Mattel published a game He-Man: The Most Powerful Game in the Universe for iOS and Android devices in 2012 which got its iOS-only sequel  He-Man™ Tappers of Grayskull.

Also, DC Comics published comic book series Masters of the Universe in 2012 and it even developed a crossover with heroes from the DC Universe. In 2018, Netflix released new animated series She-Ra and the Princesses of Power which was developed with DreamWorks Animation SKG and it was very well received and possibly getting another season.

However, most of us remember the 1987 movie Masters of the Universe starring Dolph Lundgren (Rocky IV) as He-Man and Frank Langella (Frost/Nixon) as Skeletor and was directed by Gary Goddard for whom this was a directorial debut. The reboot was in the works since 2007 and the project changed various directors, witters and even studios. David S. Goyer (Batman Begins) and Joel Silver (Predator) were once attached to the movie, but in January this year, it was reported that Art Marcum and Matt Holloway (Iron Man) will write a new draft. The Nee Brothers (Band of Robbers) are set to direct since April last year, and now we know that the film will finally start with principal photography in mid-July.

The cast is still unknown, but considering how close is the filming date, we will certainly hear more about it reasonably soon. We hope that they won’t leave out some details as they did in 1987 like Adam turning into He-Man or characters like Orco. But also, we keep our fingers crossed that the story will take place on Eternia and not the Earth like Gary Goddard’s movie.