Welcome to Era of Chaos’ Best Army page. Here you will find 5 Best Armies in our opinion, which can be assembled currently. With the introduction of new units and Heroes, we will change Best Armies in order to always be up to date. Best Armies are assembled according to our game experience and we will try to be accurate although we are open to suggestions and criticism. We will listen to all your ideas and we will implement the best on our page, so please give us any feedback in order that we make the content that will be helpful to all community. Thanks in advance. Enjoy! 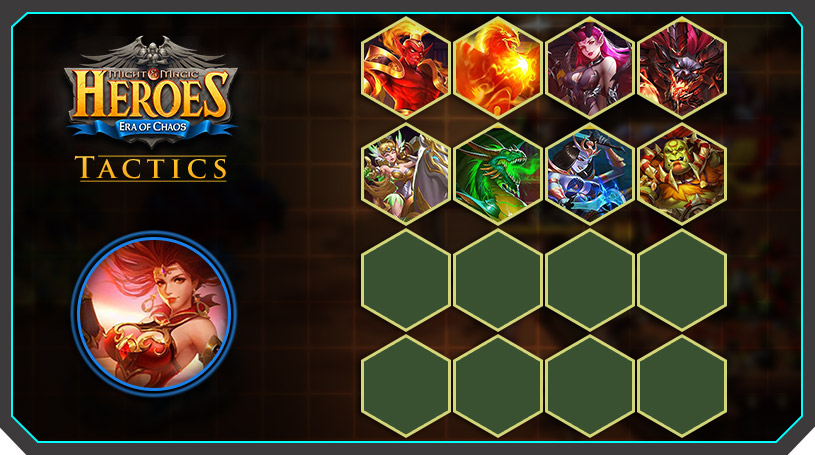 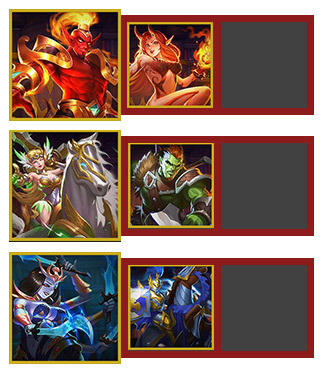 This army is probably the best offensive army in the game. If you are able to control the casting of Luna you will easily win against much stronger armies. Luna enhances Firebird and Efreeti’s burning while Firebird benefits from Efreeti. Pit Fiend behind Demon is probably one of the best front-line combinations because Pit Fiend heals Demon and summoned additional Demon unit who further heals themselves whenever they dodge (Demon’s ultimate inflicts heavy damage to the single target and drastically increases Demon’s Dodge rate). This means that a Demon will receive a healing amount that is two times bigger than Monk’s healing or Genie’s. This line does not have deadly damage output but it is almost impenetrable leaving enough time for Luna to destroy the enemy with Infernal Wall and Land of Fire. Bottom Line is made of Pegasus, Green Dragon, Naga, and Ogre. This line is not solid as a Burning line but it has enormous bleeding damage potential and Life Drain. Pegasus is one of the best ranged damage-dealers in the game who also applies Bleed to enemies and shields nearby allies. Green Dragon’s ultimate inflicts increased damage against bleeding targets and strike all enemies in the line. Naga is the top damage dealer who also has Life Drain. When you know that Ogre ho is one of the toughest defensive units in the game enhances Life Drain it is obvious why them two should stand together. The damage output of this line is incredible and Ogre buys enough time to successfully eliminate threats before enemies penetrate the defense. This strategy is vulnerable to charge units on top or bottom si it is of utmost importance that Infernal Wall is used on them if they charge to Pegasus or Efreeti. Otherwise use Infernal Wall where you can target most units which is usually the front line when your Ogre and Demon hold defense. Land of Fire should be used against enemy’s Range or Caster units but keep in mind that Infernal Wall is a spell that decides the battle outcome. This army is also very strong in the Arena but because you can’t control Luna’s casting it may seem that there are better options currently. 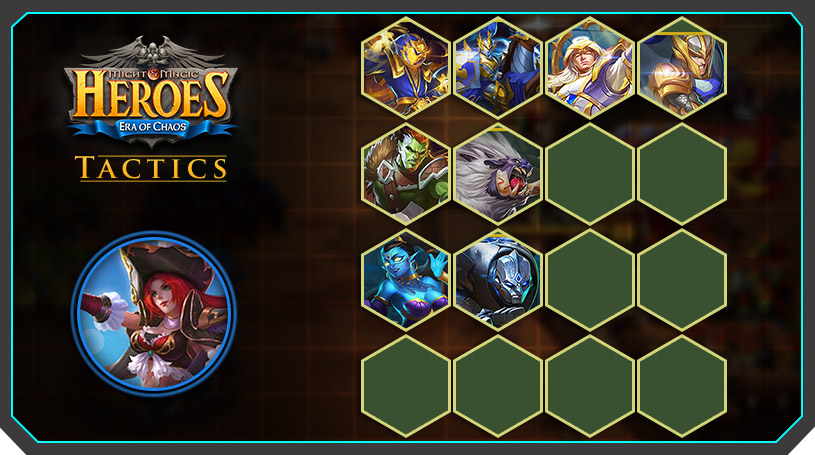 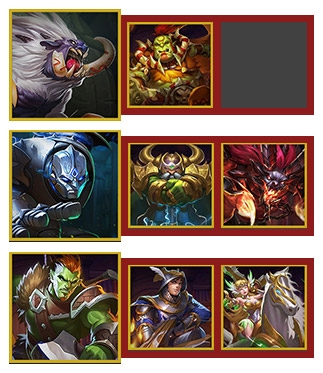 This army is a safe choice because it combines Catherine who probably already has all spells at maximum level, her specialty Swordsman, Monk’s High Morale and healing of Angel, Genie, and Monk. This army damage output is mediocre since Orc and Cavalier are only true damage dealers but its front line is almost indestructible. Top-line is made of Castle units with Iron Crusaders in front (Catherine upgrades Swordsman). Iron Crusaders with High Morale are literally immortal in the first 20 seconds of the Battle. During that time Angel and Cavalier should soften enemy defenses making possible for Cavalier to charge into back-row. The middle-line will be defended with Behemoth who is the toughest unit in the game supported by Orc who proved to be the most useful Range unit considering price and efficiency. The bottom line will be defended Iron Golem supported by Genie. Genie will heal Iron Golem all the time which will give enough time to Golem to survive until it gets help from Angel and Behemoth. All support spells should be used on Golem because when you use cast buff on Golem it receives additional healing. Angel heals a percentage of health to all units during an entire battle and resurrects first fallen unit meaning that if one of your Defensive units or Cavalier dies it will rise again immediately. This army will not give you fast victories but it will give you certain victories. Also, this army is very good for PVP Defense since its synergy does not depend on accurate spell casting. 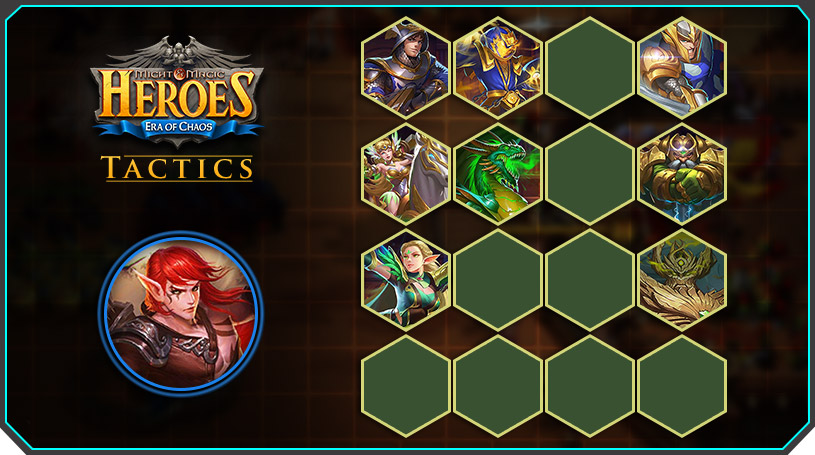 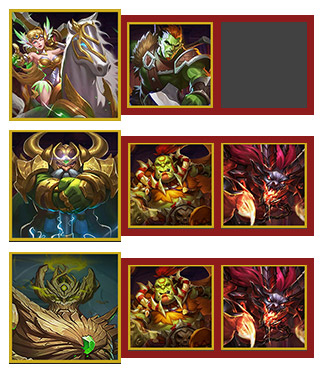 Gelu is often underestimated because Wood Elf and Marksman are an easy target in PvP and vulnerable to Charge. However, for Campaign, Underground, World Map and Duel of Champions Gelu could be your ideal choice especially since it is not that hard to assemble the Army which will utilize his abilities in the best possible way. Top-line is made of Castle units who will benefit from High Morale. The middle-line contains Pegasus, Green Dragon, and Dwarf. Green Dragon will benefit from Pegasus bleeding attack and Pegasus will Shield Sharpshooters and Green Dragon making this back-row less susceptible to charging units. Dwarf should be in the middle so he could buff with HP adjacent defensive units at the start of the battle. In the bottom-line, there are only Wood Elf and Dendroid Guard. Dendroid Guard is one of the toughest Defense units in the game and it applies Slow on enemies. Sharpshooters inflict additional damage against Slowed targets, therefore Wood Elf will maximize its damage against anyone who opposes Dendroid. Those lines should be shifted according to the position of enemy Charge unit but the most important thing is to place Pegasus and Dwarf between two lines. Also, Green Dragon should be placed in the line where the most enemy’s non-flying units are present in order to utilize its ultimate most efficiently. Gelu’s spell Frenzy is what makes this army unique. Frenzy is very powerful but drains a portion of health on the selected unit so it is important to always use Frenzy on Green Dragon and Pegasus because you will be able to cover both units with the spell and their damage-done-after will be less affected than if it is used on Wood elf or Marksman. As you will see with every use of Frenzy your Range units will kill the target they attack. This army is capable to destroy enemies very fast which is important for battles where you have 1 min to acquire the maximum number of stars. Having Bow of the Sharpshooter makes this army even more dangerous. 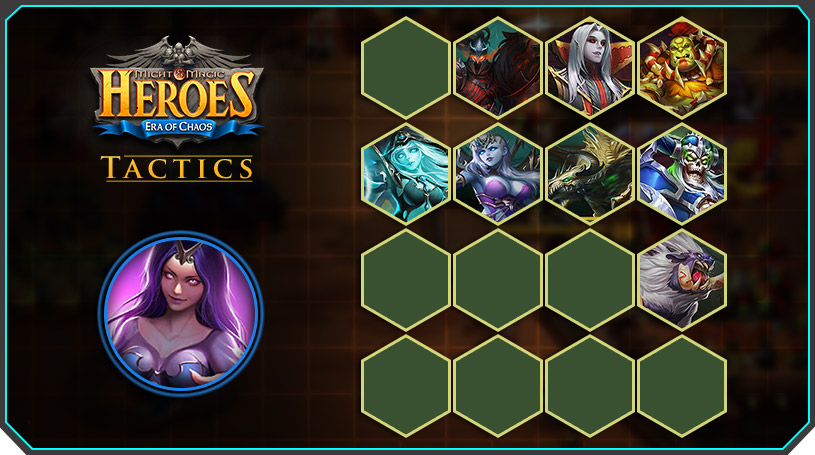 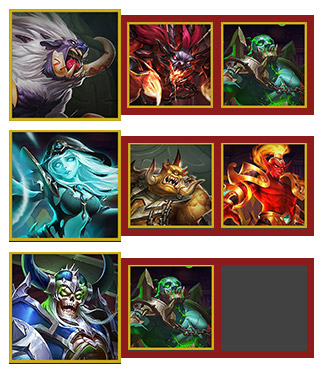 It may seem that collecting the Necropolis army is an extremely hard task but with a little luck, you will be able to assemble an unbeatable army. Vidomina is the Hero who should lead the Necropolis army because her ability to Animate Dead, use Necromancy and summon Undead Army is what characterizes the power of Necropolis. Top-line is made of Black Knight, Vampire, and Ogre. Ogre will buff Vampire’s life steal and protect Charge units while Black Knight will deliver damage output needed to swiftly break enemy defenses and enable the charge to enemy’s back-row. Middle line is fully Necropolis based and here you will have Wight with decent damage output and ability to silence casters, Lich who will be the main damage dealer and Necromancer, Bone Dragon who will lower defenses of enemy front line and Skeleton who is not toughest Defensive unit but who can reflect damage and enable Lich to maximize its Necromancy. As you can see this line will be impenetrable with the help of Vidomina and a Lich. Lone Behemoth is the ideal unit to guard bottom lines while top lines deal with enemies. This Army is so powerful that only your own experience can witness its power. Zounds of Skeletons will overwhelm anyone who opposes you while your mighty Black Knights get stronger and stronger as the battle comes to an end. Necropolis troops are indeed stronger with Lord Haart but until you open Commander of Dead Knights you will be more than satisfied with Vidomina. 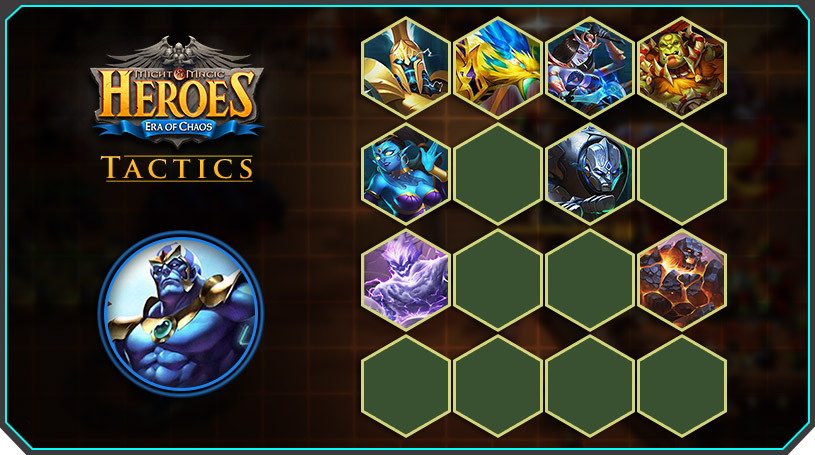 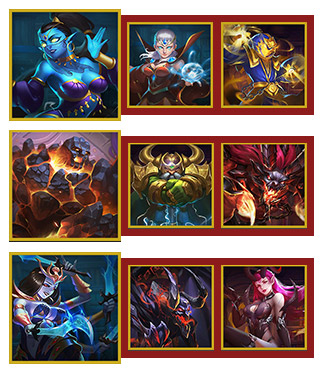 Solmyr is the Hero who can shine in any army but we tried to assemble an army which will maximize his lightning spell damage. Top-line is assembled from Giant, Roc, Naga, and Ogre. Giant and Roc will cause lightning damage to anyone in this line so this line must be shifted according to an enemy position to affect the maximum number of enemy troops. We already spoke of synergy between Ogre and Naga and how Naga’s Life Drain is enhanced by Ogre’s Aura. This line accumulates so much damage that it will utterly destroy anyone on the opposite side in several seconds. The middle-line is another already mentioned synergy – Genie and Iron Golem. This line will be rock-solid but if you succeed in placing Wind Wall with Solmyr so it could affect both Naga and Iron Golem you will make your troops twice as dangerous. The bottom-line is made of Storm Elemental and Earth Elemental. Those Elementals are hard to farm but when combined they provide unlimited power for Solmyr. Earth Elemental is so tough that it will endure deadliest attacks long enough to Storm Elemental unleash its ranged damage and kill opposite front-liner. And even when Earth Elemental is downed, Storm Elemental will be still protected since Earth Elemental will split into two smaller Elementals of almost equal toughness. Storm Elemental is not only one of the best Range units in the game, but it also enhances Lightning damage of allied Hero and troops meaning that all Solmyr’s spells, Giant’s and Roc’s skills will be enhanced. According to skill descriptions, this army should be able to deal with anything on the opposite side with ease. The damage potential of this army is enormous while its defense is one of the best. If you are able you should definitely try this army! 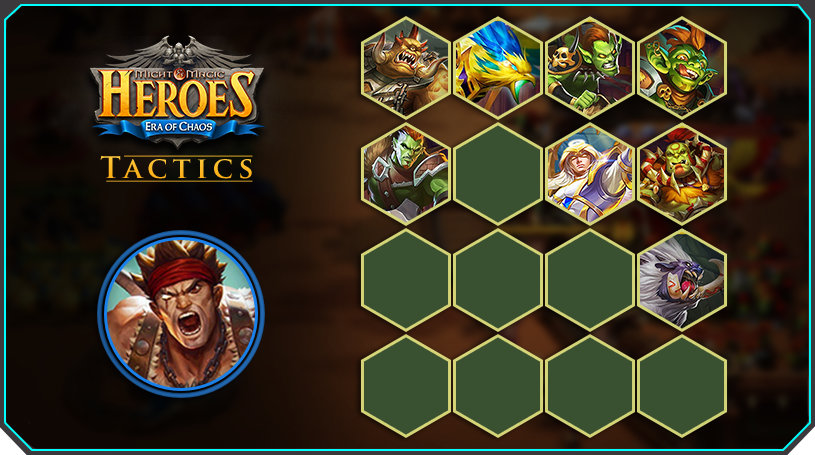 With the introduction of Kilgor, Stronghold units gained a totally new perspective. Kilgor’s specialty is to enhance already overpowered Behemoth who is now immune to almost all effects and whose death will guarantee Invincibility for all Stronghold units for from now on. Also, Kilgor’s ultimate enhance Defense of all Stronghold units, increase their Critical Damage and grants significant healing over time. When Kilgor is fully upgraded (4 stars) effects of his ultimate are doubled, prolonged and its mana cost is reduced by 40%. This practically means that his ultimate becomes broken and that will be probably nerfed as we have seen before with Luna’s Infernal Wall. Because of all of this, Kilgor must lead a fully assembled Stronghold army with all its subjects. Every single Stronghold unit will benefit from Kilgor’s skills and they will last 5 seconds more because of Behemoth’s passive ability. As Stronghold has 7 different units, the question is which unit is the best to be added with them. The simple answer is an Angel because he will provide constant healing, 1-time Resurrection and his attack is formidable. If you are not able to combine Angel with the rest of the Stronghold team, you should use Naga who has a great synergy with Ogre (increased life-drain) or Pit Fiend who can improve Ogre’s healing. If you don’t want to use all Stronghold units and you want to use Kilgor nevertheless, be sure to pick all Melee Stronghold units since Kilgor’s unique spell is definitely more potent for them. All in all, Kilgor will change the balance of the game and this is the right time to start farming his green minions.

We hope you liked our selection of the best Armies. If you have your ideas be free to share it with us because will implement the best armies suggested by the community on this page. Also, as the game grows and new units are introduced we will update this page accordingly. If you want to learn more about Heroes and Units in Ear of Chaos please check our Hero Tiers page  and Unit Tiers page.

Moonshades indie RPG is a revival of the classical, old school experience from Might and [...]

Warhammer Underworlds: Online is a competitive game that combines strategy, tactical combat, and cards. It [...]