MoonTon continues its good tradition of constantly improving their products. Mobile Legends Adventure is changed so many times from the Beta release that it is not the same game anymore. Some of those changes did not improve the game in the way we all expected but we cannot say that MoonTon is doing nothing and that the game is not better with every new week. Changes in the last Update are not big but it definitely introduces some new concepts that may get a positive reaction from the community.

After the introduction of Irithel, MoonTon decided that it is time to bring a new game segment in the Time Portal and that the Labyrinth should be more interesting and demanding.

Celestial Mysteryland is the name of the new minigame in Time Portal.

Unlike other game segments in Mobile Legends Adventure, Celestial Mysteriland asks from you that you pick 5 Heroes and 5 Replacements for the battle to come. Each Battle in Celestial Mysteryland grants certain buffs or debuffs for the allied and enemy team. List of possible effects is long: Hero’s Hp can slowly decrease during the combat, damage of Hero’s Basic Attacks could be lowered,  Hero’s Spell Vamp can be increased, etc… When you start the Battle, 5 Chosen Heroes will fight against 3 waves of enemies. Each Wave has 5 Heroes and 5 Replacements and when you kill an enemy Hero, one of the replacement will automatically enter the combat. The same principle works for your team – when an allied Hero is killed, a first replacement will come to the battlefield instead of him. When you clear all 3 stages you will be awarded with Diamonds, Advance Essences, Hero Experiences or Battle Points. As you win battles the difficulty of the challenge will be risen providing better rewards. At some point, you will face Boss stages. Boss stages are considerably harder than regular stages but it grants much better rewards. Clearing all 3 Waves of enemies on each Stage grant you 3 Chrono Stars that are counted later for Time Portal rewards. Time Portal rewards offer two kinds of rewards – Basic Rewards and Gold Member Rewards. Obviously Gold Member Rewards are better but you will have to pay for Gold Membership with real-life currency.

The Labyrinth is also changed. 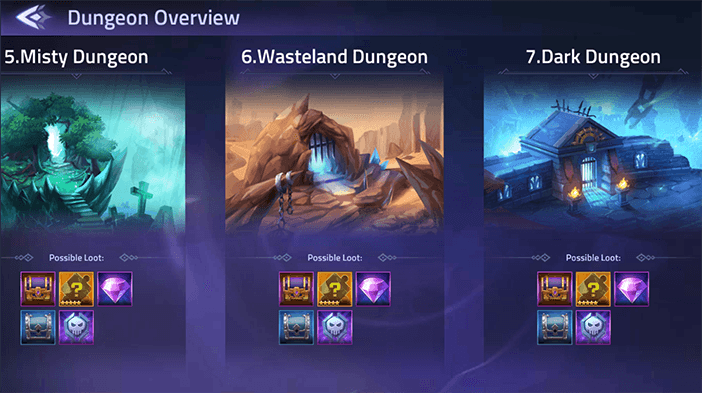 Now you will gain a new currency called Dungeon Coins after clearing the Dungeons that can be used in Dungeon Shop. The principle of Labyrinth remained the same – you need to flip floor tiles in order to find a key for the next Dungeon Floor. Dungeons have more floors and new enemy types but the strategy is almost identical – kill all enemies and acquire all bonuses before facing a Boss. In order to gain a bonus for your team, you will have to earn enough energy which means that from now on you will have to kill 2 monsters (1 monster killed fills a half of energy bar) before you can collect a bonus. This should make your journey through the Dungeon harder but in reality, it is the same because the difficulty of enemies is lowered according to your current Labyrinth progression. New items like canon which can hurt Monsters in the straight line or a Monster that explodes after you deal with it and injures all remaining Monsters on the floor are added in the Labyrinth. This all may seem more complicated than before but it is actually a lot easier now. As you progress through the Labyrinth and opens new Dungeon, the difficulty of Monsters will increase but you will be awarded with better rewards as well. Entire strategy for the lAbyrinth you can find in our  Mobile Legends Adventure Guide. Truth to be told I can’t see any real changes in the new Labyrinth except that it is now a lot easier which is not a good thing if you ask me.

However, all those changes are made as a result of interaction between MoonTon and the community so it should probably positively influence on Mobile Legends Adventure future. BlueMoonGame will continue to feature all news regarding the game and be sure that every new Hero will be described and introduced in our Mobile Legends Adventure Tier List.

Until then, Good Luck Heroes and may the RNG be with you!