Apple is the best at the optimization game

iPhone XR release date was in October 2018, and even then it was intended as a budget option for people who wanted to upgrade to a new Smartphone but with medium-class features and a price to match. Now, nearly one and a half years later, we revisit this device with the hopes of perhaps finding an affordable option for a decent Smartphone, hardware, and software-wise, that is cheap, reliable, and can accommodate to the gaming audience.

Apple has been dishing out its iPhone devices like clockwork, since the first generation which came out in 2007. The latest model out on the market is the iPhone 11 Pro Max, at the time of writing this, and we will soon get the iPhone SE 2. Throughout these thirteen years back, the brand has managed to establish itself as a leader in manufacturing Smartphones, despite the fact that many other brands and models have challenged and even surpassed them in certain areas, features, and capabilities. However, to this day, no cell phone was ever built with better inner working stability and optimization. But, what is always the problem with iPhone for most people is its accordingly high price, and thus this iPhone XR was built. It is the twelfth generation of the brand, released on October 26, 2018. 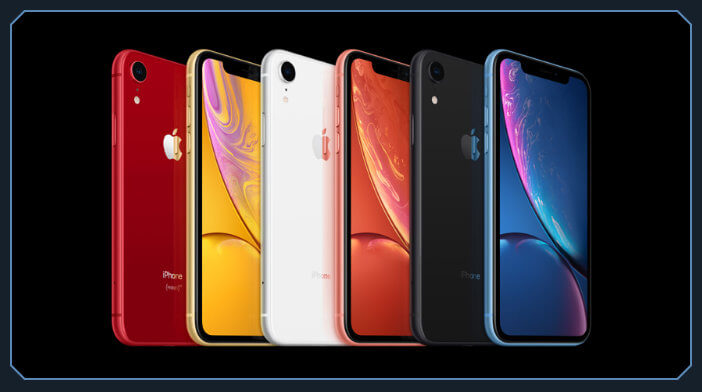 A FORCE TO BE RECKONED WITH

GET IT RIGHT NOW!

Very sturdy and it looks nice…

The iPhone XR has a chunky build, which reminds of the older models iPhone 4, 5, and even SE and gives off that feeling of sturdy and durable quality. And, it is precisely that. It has a Gorilla glass front and back, with aluminum frame from the 7000 series, very sturdy and it looks nice. It comes in red, black, blue, yellow, white, and coral color options. The full dimensions are 5.94 x 2.98 x 0.33 inches (150.9 x 75.7 x 8.3 mm) and it weighs 6.84 oz (194g), which is, as mentioned, quite chunky but it’s not the heaviest Smartphone out there.

The front side holds the 6.1 inches (90.3 cm²) Liquid Retina IPS LCD touchscreen display, at a 79% screen-to-body ratio. The rest of the front side is reserved for the notch at the top, which holds the speaker and the selfie cam. The bottom edge holds the other set of speakers, with the antennae and the charging Type-C port. The right-hand side edge holds the power ON/OFF switch and the SIM card tray (no microSD support), and the right-hand side edge has the volume controls. The overall glass design of the unit makes it quite slippery and it can also start feeling somewhat uncomfortable when being held in hands for prolonged periods of time during gaming sessions.

Quite accurate and clear… 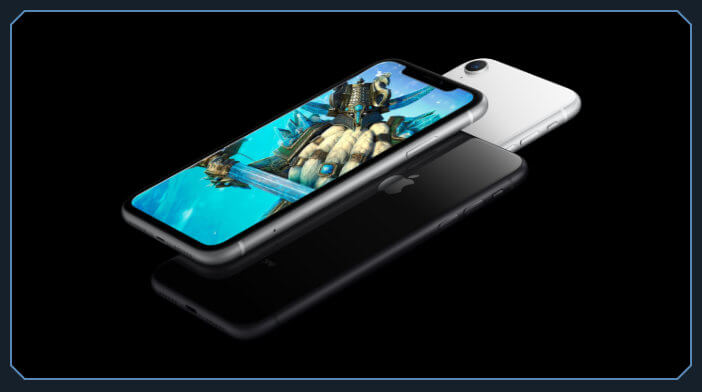 This unit features an LCD Liquid Retina display, with curved corners and a notch at the center-top part. It has 828 x 1792 pixels at 19.5:9 aspect ratio, and it is surrounded by a thick black bezel. The brightness and the viewing angles are pretty good on this model, quite accurate and clear. It has an approximate 326 PPI density, which is the same as the iPhone 8. Unfortunately, there is no 3D touch and it’s not an OLED panel obviously, being an LCD-type.

The colors look good with the standard 16M capacity but user feedback mostly states that there is a noticeable difference when comparing this 828 display to a larger one, not just in resolution but in picture quality for its 326 PPI. But the resolution and the lack of 3D is not what is its pressing issue; it’s the bezels that take up the most space. It is perhaps the signature look and design for Apple, but they are taking up way too much space.

The sound quality is superb… 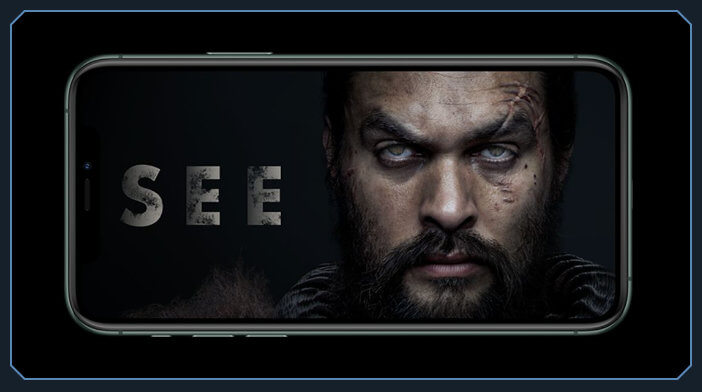 Most online sources and iPhone XR reviews agree that the sound quality is superb. It does have loud stereo speakers, but alas, no 3.5mm headphone jack. Since Apple seems to always be ahead of the game when it comes to recording, both video and audio, the audio recording is also at a pretty high quality, which is something many flagship Smartphones struggle with even today.

It actually can shoot 4K videos…

As mentioned, Apple has always found a way to be ahead of the curve in this category, and even though this device only has a single main 12MP camera, it makes up for it with its 26mm wide-angle, good image stability, and it actually can shoot 4K videos. No, it is not as good as a camera on the latest iPhone 11, nor the Pro series, but it holds its own. Photos and video quality is nice, as Apple knows how to balance the software, use its lens to its maximum, and features. It can shoot in portrait mode, HDR, panorama, and uses a quad-LED dual-tone flash. The selfie cam can be a bit of a let down for people who insist on using it for their Instagram magic, since its only 7MP, but the camera overall is not important for gaming at all, so as far as we are concerned, this is a pass.

Apple is the best at the optimization game… 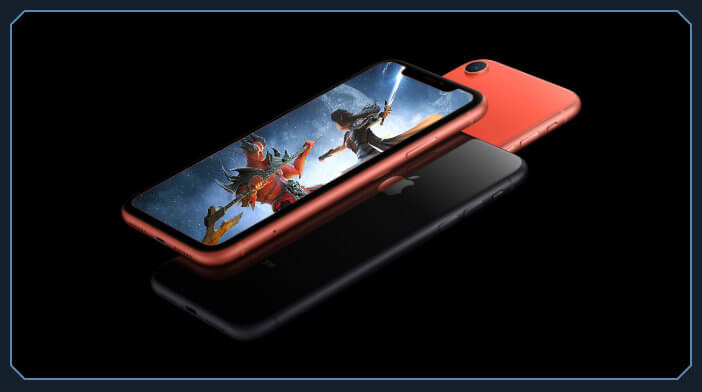 Apple is the best at the optimization game, and although its devices can sometimes display a somewhat lower spec power than the competitors, the iPhone Smartphones often outperform even the most powerful competitor models. This iPhone XR packs the iconic Apple A12 Bionic chipset with an incredible Hexa-core CPU at 2×2.5 GHz Vortex + 4×1.6 GHz Tempest. This is incredibly smooth and the optimization of the core power will never let you down, which is Apple’s signature quality feature. It runs the iOS 12 and can upgrade to 13.3, while the graphics are handled by the 4-core Apple GPU, again with their trademark quality.

When you factor in all of the mentioned things, this phone’s seemingly low 3GB of RAM capacity is not so bad, seeing as it works like a charm with the Hexa-core CPU and the incredibly good chipset. Most online sources and community feedback agree that 3GB of RAM is all you need, and to prove how well optimized this device is, it goes hand in hand with its low pixel count and the app management which is inherently great with iPhones.

Having somewhat undemanding features and thanks to its incredibly well optimization, iPhone XR’s 2942 mAh battery is really good. It is a standard non-removable Li-Ion battery at 11.16Wh and it works in correlation with the A12 bionic rather well. Also, charging is excellent, with the 15W fast charge reaching 50% of battery life in about 30 minutes. The glass back of the device allows for wireless charging, but the fast charger doesn’t come with the phone and requires additional purchase.

This Apple Smartphone served as a budget option right from the start, but that’s compared to other iPhone prices in general. However, it was not cheap at all back then, with its price being around $750 in the fall of 2018. However, as the competitors are all dishing out two or more flagships in a single year these days, the prices of all Smartphone models are dropping at record speed. Thus, this model wouldn’t be at all viable just a couple of months ago, but now, seeing as it can be found for as low as $380, it shows appeal.

Sure, the camera is not as powerful as perhaps on some other phones that already start at $450, but it is, as we mentioned, not a requirement for a good gaming Smartphone. What is a pressing requirement is the core CPU, chipset, and graphics combo, along with a battery to support it. This is a primary concern, and the iPhone XR is brilliant in this regard, as all iPhone models are.

A FORCE TO BE RECKONED WITH

GET IT RIGHT NOW!

The optimization and the balance achieved in its inner workings will ensure long-lasting stability for all purposes, but at the cost of video quality, unfortunately. However, the video quality is not that noticeable at all when playing standard 60fps games (and it’s a vast majority) but the somewhat smaller screen can be a problem for many games that require a larger viewing surface to fit the controls and other UI elements.

Also, iPhone XR was not built for gaming in the first place, so there are no gaming optimizations what so ever, but the iOS 13.3 does have its own features that are generally very cool for all purposes, including mobile gaming. The design of the device is also not the best one for mobile gaming, as you will cover the speakers with your hands and fingers as you hold it to play with your thumbs.

This Apple Smartphone is still viable in 2020… 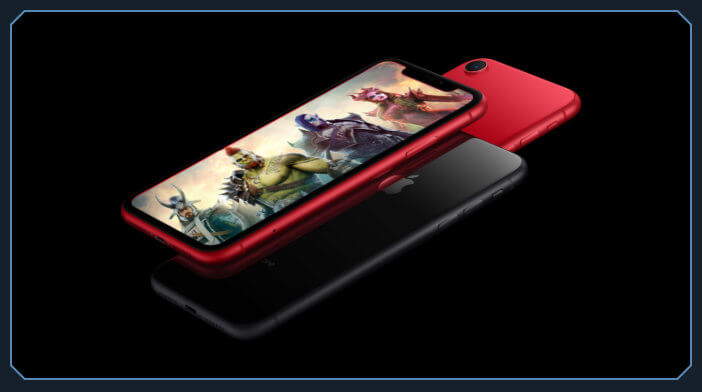 Although it lacks some features, this Smartphone is still a viable option to buy. Of course, if we only consider mobile gaming, this phone does seem to lack some vital features in terms of its design, but it has the fastest processor Apple has made at that time, and the incredible optimization, paired with the CPU and the processor makes this device a force to be reckoned with.

It may not be primarily intended to please the most demanding gamer out there, but they’re still hasn’t been a mobile game that can pose even the slightest problem for this Smartphone. With the prices continuously dropping, this phone may go even lower, although its quality will probably make the price stop at about $300 to $350, and it is well worth it. Purchasing an Apple iPhone that came out no full year and a half ago at that price is always good, no matter what, and the Apple iPhone XR is still viable in 2020, no matter what anyone says!

All images in this article are taken from:

By using an affiliate link in this article to purchase this or any other product within 24 hours of clicking on a link, you are helping the BMG team to continue doing what we do best. Thank you!

The Apple iPhone XR is still viable in 2020, no matter what anyone says!