One Plus 7 Pro Gaming Review

The killer speed, the clear screen, and the powerful CPU

OnePlus 7 Pro came out in mid-2019 and it blew everyone away with its speed back then, along with a couple of other cool features like the 90fps capability, insane speed, and others. However, what made it interesting for us was its clean 6.67’’ display screen. However, it has round edges, and a couple of other features that may not be the best for gaming currently, so we wanted to delve deeper into it and see if it’s that good or if it lacks some crucial ingredients to be gaming-worthy. 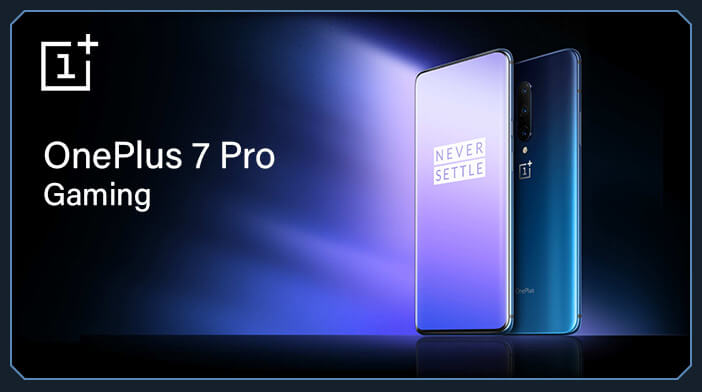 One Plus Technology is a Chinese manufacturer, founded in 2013, over six years ago. It is a relatively young brand in the Smartphone biz, along with Google’s devices, Razer, and a couple of others. However, they already spread to around 34 countries and have dished out several successful device series. OnePlus works under the slogan “never settle”, which is seen right at the unboxing of this flagship OnePlus 7 Pro Smartphone.

This phone is all screen, with an aluminum frame…

Right off the bat, this phone is all-screen, built with a combination of glass and aluminum. The front and the back are all Gorilla Glass 5, with aluminum frame. The case has no 3.5mm headphone jack, which is perhaps something of a problem for most users, but the device comes with its own Bullet wireless 2 earbuds. It also supplies its Warp car charger, which is reportedly almost as fast as the standard charger method and it charged the battery up to 50% for about 20 minutes.

Now, as far as the round edges go, this is something the community is divided on, as they are reportedly good looking but are not that pleasant for gaming, as opposed to the standard flat sharp edges. However, it does give the phone and display a sleek design, and the videos you play on it will make your jaw drop.

The dimensions of this device are 6.40 x 2.99 x 0.35 inches (162.6 x 75.9 x 8.8 mm) which is huge and is great for good looking games, but it can feel a bit too much when you intend on playing with two thumbs as you may feel you need to stretch to reach your commands too much. Because of that, it may feel kind of awkward for hand-held gaming, but it’s perfect for the “claw” method.

It comes in three color variations: nebula blue, almond, and mirror grey. The triple camera is on the back, in an upright setup. The USB type C and one of the speakers are located on the bottom side, while the top side has the pop-up front-facing cam. The right-hand side has the three-stage main analog on/off switch, which also allows a quick switch between the audio profiles.

The mat design looks cool, but despite OnePlus 7 Pro not having that glossy finish, it is still one of the most slippery Smartphones now, which may pose a problem when gaming for prolonged periods by holding it in your hands. However, a good runaround for this is to get a good grip case, and OnePlus does offer just such on their site. 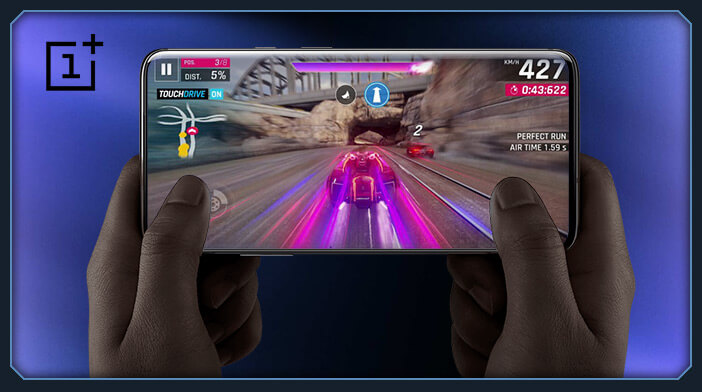 The 6.67-inch display is a big step up for OnePlus Company with the round corners, making this model easily their best looking so far. Of course, the main feature that makes this all worth the praise is that the display is completely clean, without the notch or any other stuff in the way, because the selfie cam and the ear speaker are on the top side. The ear speaker is on the curvy edge, between the display and the top side, which is clever design indeed. The fingerprint grill is right behind the display glass and is quite large and quick.

The 1440x3120P resolution capability is of course “the bomb”, but it wouldn’t be that good without the 90Hz screen refresh rate. However, it comes with a drawback as the 90Hz refresh rate can drain the battery quite a lot.  There’s also HDR10+, which makes both the videos and games look and feel great. The round edge design may feel awkward for some games, but it enhances the Augmented Reality experience, like when playing Harry Potter Hogwarts Mystery or the new Minecraft Earth, which is where the clear display also shines.

Not the loudest or the clearest audio…

When it comes to this device’s advertized stereo sound, it is achieved by utilizing both the mouth and the ear speakers when you play sound from a video or a song. However, it is not the loudest or the clearest audio compared to other flagships. The sound can also sound a little low-end and when compared to iPhone Xs Max, it loses the duel. Also, when you play games by holding the device in both hands, you may find it tough not to cover up the lower mouth speaker with your hand, depending on how you rotate the device and this can feel awkward. 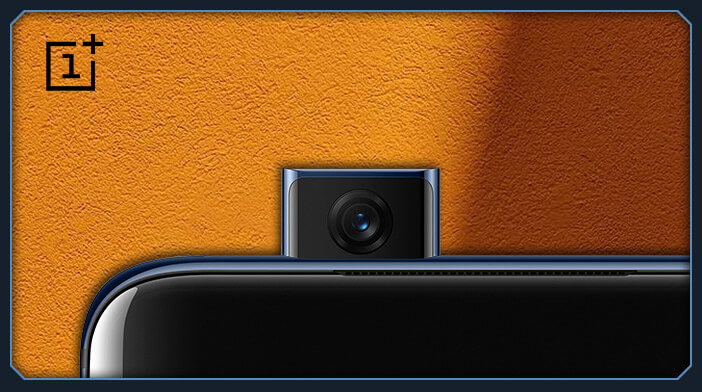 The camera is not that important for gaming. Any AR games can function with any camera set up, while other games do not need it altogether. But, it is important to note that this device has a triple setup, which is now mandatory if you want to be competitive on the flagship scene. The wide cam has 48MP, the telephoto lens can do 8MP, and the ultrawide sensor captures up to 16MP. With that said, the lighting is not that great according to most online tests and sources.

A cool feature for the front pop-up cam is the Automatic Freefall detection, which detects immediately when the phone enters free fall and retracts the cam before it hits the surface, so if you drop it, it will protect it.

Beats most of the competition in speed… 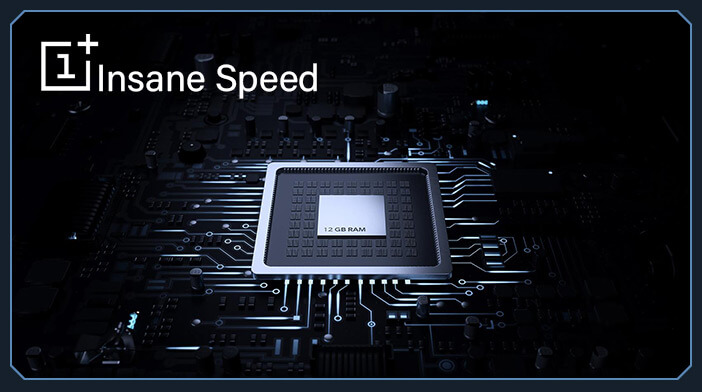 Insane speed! That is what everybody’s been saying about OnePlus 7 Pro when they’ve tried it. Even the fingerprint unlock is the fastest ever and there are also several options for you to disable unnecessary animations to make it even faster. This naturally adds to the gaming experience for this phone will run the most demanding games like Black Desert, EVE Echoes, and others the way they’ve never been run before. The Qualcomm Snapdragon 855 has been a part of many flagship devices through the entire 2019 year, and, if a company wants to be competitive in this regard, it has to have it.

The speed and the features offered for optimizing your animations make this phone one of the most fluid and snappy experiences out there. All testing done has unanimously shown that this OnePlus 7 Pro beats most of the competition in speed, whether it’s just going through the phone’s features, or gaming, or anything. Feedback and response times are snappy and precise, and the important thing is that the phone has the cooling paste which prevents it from getting too heated up when playing demanding games. 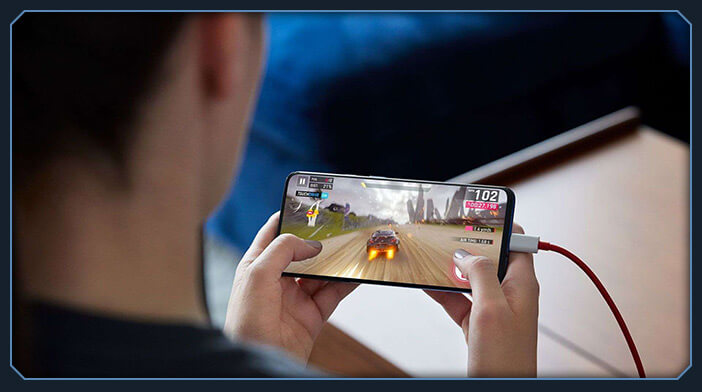 This is perhaps the drawback with OnePlus 7 Pro, as the 4000mAh is a bit outdated for a 2019 flagship, but still many others have it too. There is no wireless charging, but the 30W Warp Charge makes the charging fast, with reaching the 100% can take even less than 40 minutes. With that said, the 90Hz screen refresh rate does drain it quite fast. The average time this device can keep the screen up for the basic stuff is around 4.5 hours, and with it running a high-resolution MMORPG game with 3D models and background, it can’t even make it past 4 hours.

This is kind of low, compared to Huawei P30 Pro, which is the undisputed battery champion currently, as it can provide over 7 hours of screen ON time. It is important to note that the software settings also offer an easy switch from 90Hz to 60Hz, which can save that precious battery life a lot. Currently, OnePlus 7 Pro lacks any dynamic screen refresh rate setting, as when you are set to 90Hz, it stays that way throughout everything you do, gaming, home screen, videos, and all. Maybe if the company makes some progress on this, we can see an improvement, because switching down to 60Hz may feel like you are missing out on the whole idea of this Smartphone’s goodness.

Compared to others, it is affordable…

The fact that this phone starts at $670, with features that can compete with the best flagship Smartphones from other manufacturers that cost over $800, means that it is very affordable. However, the price will go up depending on which features you want to include, like the 256GM storage space and the 12GB of RAM variation. The fact that it comes with its wireless earpieces and would only require you to purchase the casing, makes it still one of the most affordable flagships of 2019, and it is even cheaper now in 2020, going down under $510 according to some sources.

The killer speed, the clear screen, and the powerful CPU

The killer speed, the clear screen, and the powerful CPU make this OnePlus 7 Pro the company’s flagship, no argument there. The camera setup is also competitive, but it can’t beat the last few models from Google, Apple, or others. It starts at $670 bucks, which is one of the lowest flagship prices of 2019, and the array of high-end features gives it a great overall value. Now, in 2020, you can get one for as low as $510, our online research shows. However, OnePlus 7 Smartphone is going to be much more suited for people who need it for viewing a video or anything that will make the most of its incredibly cool screen, than for those wanting to use it as a gaming phone. That said, its speed will make a mockery out of even the most demanding mobile games today.

Images used in this article are taken from:

By using an affiliate link in this article to purchase OnePlus 7 Pro or any other product within 24 hours of clicking on a link, you are helping the BMG team to continue doing what we do best. Thank you!

The killer speed, the clear screen, and the powerful CPU...