Star Trek: Starfleet Command titles are now cult video games based on the tabletop wargame which allow you to operate various ships from the Gene Roddenberry’s universe and engage in battles. The game was released in 1999 and had one expansion and two sequels, the last one released in 2002.

Now, Trekkies and all those who are fans of the new-old crew are in for quite a treat. Star Trek Fleet Command brings a similar idea to Android and iOS devices and everything looks and feels mighty good.

Star Trek Fleet Command is a massively multiplayer real-time strategy and RPG designed by Scopely, Digit Game Studios, and CBS Interactive. The game includes crew from the latest incarnation of Enterprise or better said reincarnation of the iconic characters like Captain Kirk and the gang. I’m talking about J.J. Abrams’ Star Trek movies, of course, which also follow a different timeline.

The story will depend on the choices you make during the game. After all, there are numerous missions and narrative paths available to take which will determine your experience. Of course, since this is a multiplayer game, a lot will depend on how you interact with other players as well. What will make players the happiest (at least it did make me) is the fact that you can use your favorite characters and create a team. Also, you can choose one of the three available factions: Federation, Klingons, and Romulans. When you choose a faction, you will have its ships, officers and technologies at your disposal which is pretty cool since you get to see how different and unique other civilizations are.

If you remember, Romulans, Klingons, and Federation were in constant conflict during that period. The TV show Star Trek: Discovery gets into details on the beginnings of the Federation-Klingon War while Earth-Romulan War led to determining Romulan Neutral Zone and brought the forming of United Federation of Planets. These three civilizations always had their clashes even after the peace was established and zones defined. Once you choose your faction you will be able to participate in battles, strategize and get help from other players. Additionally, you will have to create your base and keep it safe and whenever you take a mission, you get drawn deeper and deeper into the complex Star Trek universe. And honestly, it’s every fan’s dream.

When it comes to battles, it’s all in real time. While you wait for something to finish or calculate, you can simply go and do other tasks. However, if you are anxious and patience isn’t your strong suit then you have an option to pay and speed things up, using the real money of course to buy in-game currency.

The game starts with a tutorial which is pretty useful and will help you out a lot to get into the mechanics of the game. You will get instructions on how to build a base, attack targets, find your way on the map and all other things that you will need during gameplay. If you have experience with strategies, then you know how it all works essentially, although it’s always nice to get to know the uniqueness of specific game right from the start.

When it comes to bases, each has several areas which serve their designated purposes. There are mineral factories, research and development area, command center and, naturally, a hanger for your ships. At first, pay attention to leveling up the buildings in order to upgrade the entire base which will bring you better ships and tech. Once you level up your base to a certain point, you will get access to research tree and from then on you should start researching since that will bring you upgrades you need for ships. Namely, the schematics you will need to build better ships will only be available through research so if you want the Enterprise you will have to work for it. 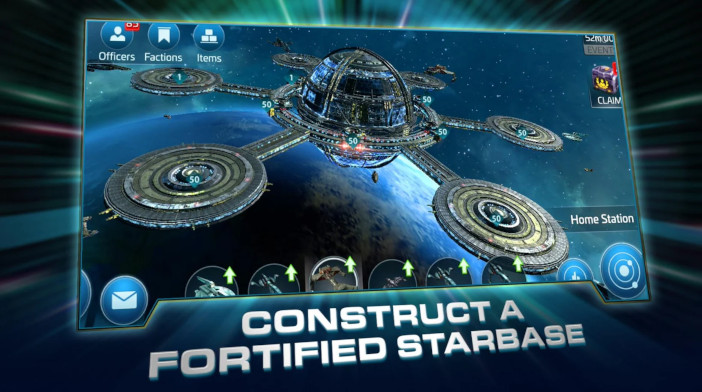 Regarding the upgrades to the ship, you will do this in parts, meaning that you will be upgrading warp drive, shields and weapons. This leveling up to the ship is very important with the first ship and will get you through the events early in the game until you can start researching and get more ships. In order to level up your ship, you will need ship experience points which you earn through battles with NPCs. And to upgrade the parts, you will have to get explorer parts also obtained through battles.

Battles also require certain things to be in order and running in blindly is a waste of resources and time. First of all, your strength has to be greater than the ship’s you are battling. You can easily find out the specifics about the enemy ship by tapping on it which will scan it, something they used to do a lot in the Star Trek TV shows and movies. Scanning will reveal the ship’s strength compared to yours and its defenses, as well as rewards you will get when you beat it. To attack the enemy ship, all you need is to tap the target and your ship will go to the opponent and engage into battle. This is actually the type of movement you will use to travel to other planets, as well. 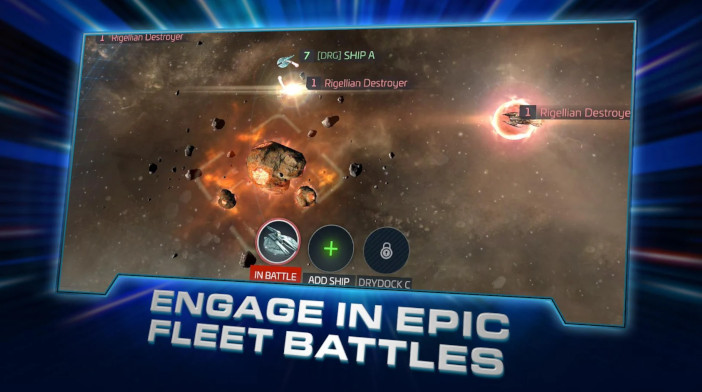 The story is based on the J.J. Abrams’ movies and Kelvin Timeline that started off with them. You also don’t have to play alone but can join fleets or create your own. Having a fleet will also give you bonuses and items you usually wouldn’t get if you play solo.

No matter if you are a fan or not, this is a nice space strategy which is fun and exciting to play. The downside is that it would be much better on a bigger screen, but iOS offers an augmented reality feature that will somewhat make all more interesting. However, smaller screens are something we should start getting used to since the mobile gaming market is starting to fill up with a lot of amazing titles, many free-to-play like this one. And another upside of Star Trek Fleet Command is that you will get to hang with fellow Trekkies and truly feel as though you are in one of the much-beloved universes.

No matter if you are a fan or not, this is a nice space strategy which is fun and exciting to play. The downside is that it would be much better on a bigger screen, but iOS offers an augmented reality feature that will somewhat make all more interesting. However, smaller screens are something we should start getting used to since the mobile gaming market is starting to fill up with a lot of amazing titles, many free-to-play like this one. And another upside of Star Trek Fleet Command is that you will get to hang with fellow Trekkies and truly feel as though you are in one of the much-beloved universes.