After a decade past Abyss, the awesome Crimsonland creators is back with one of the coolest concepts we’ve seen so far in video games this year. In short, Tesla vs Lovecraft video game puts a nerdy genius inventor Nikola Tesla, from the first half of the 20th century, into a robotic suit as he goes on to blast his way through endless hordes of Cthulhu monsters, right out of a Lovecraft novel. 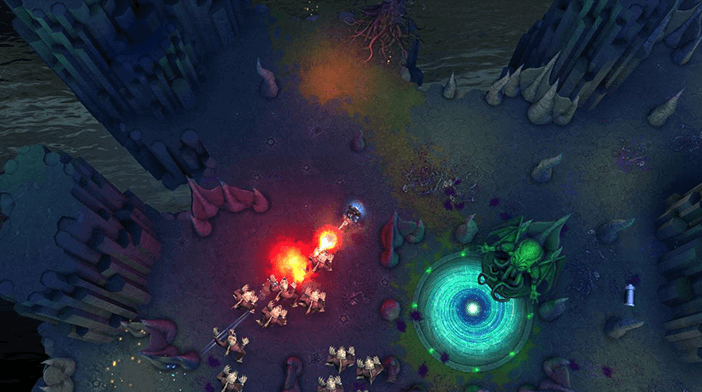 Who is stronger, Tesla or Lovecraft?

As you might already have guessed, the theme of this game is more important than story, in fact, it is its story.

If you haven’t heard of him, Nikola Tesla was a renown Serbian inventor, mechanical and electrical engineer, and a futurist above all else. His full contribution to science and our way of life today is not fully realized and certainly not credited enough. Among his numerous patents and inventions, he is credited with designing alternating current electricity supply system.

Among his people and many other followers of his work, he is attributed with countless other inventions, as it is believed his patents and plans are being held in top-secret locations by other governments. It is also believed Tesla himself being a humanist hesitated from designing certain weapons of mass destruction.

H.P. Lovecraft was a horror fiction American writer, who achieved posthumous fame. Amongst his most noted works are Call of Cthulhu, The Rats in the Walls, The Shadow Out of Time, At the Mountains of Madness, and The Shadow over Innsmouth. All these works are a part of the same Cthulhu Mythos canon and are widely praised today.

The interesting part is that both Tesla and Lovecraft lived approximately at the same times, with Tesla being 34 years older and also lived 6 years longer. So, in a way, Tesla is already a victor in our own history, or is he…

The gameplay or the shoot-anything-that-moves play

The fact is, there was nothing wrong with Crimsonland, so there is nothing to repair or make better. And, we are grateful to Abyss for not trying to repair what isn’t broken. The gameplay style in Tesla vs Lovecraft is the same, with naturally unique features characteristic for this game.
If you haven’t played this type of games before, it is pretty simple in its basic level. You control the main character, Tesla, from a bird’s eye view, move him around and shoot in everything else you come across that moves.

This game offers its unique set of weapons and other power trips, which are the main appeal of this genre. What makes this gameplay style so exciting is the perk system, similarly to those endless scroller old school games where you fly a ship through space and pick up weapons to shoot down countless aliens.

In every level, you start off with nothing but a basic, default weapon, and as you kill opponents and pick up loot, you get various improvements. Naturally, as you advance the opposition becomes more severe, which leads to the fact that every separate level has its own unique, culminating experience the player goes through every time. 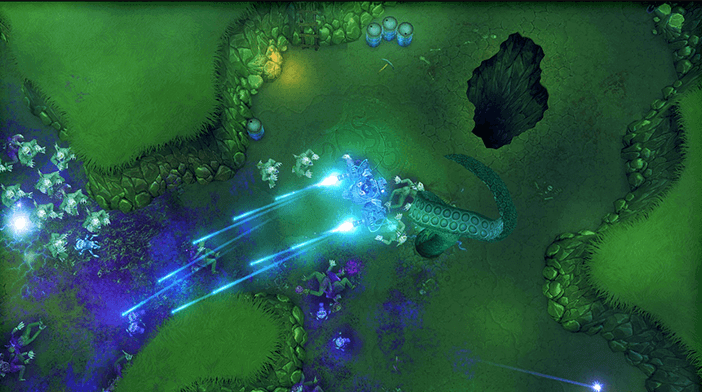 Tesla vs Lovecraft has really cool aesthetics, though. This is where Abyss did make improvements to their previous titles of the genre.  Monster models are incredibly well done and feel more real, as they move much more naturally. Shooting, as well as other special effects of Tesla’s weapons and the suit, are also simply magical, and yeah, you read that right. Tesla Suit is being collected from multiple parts, scattered all over each new level, and every time you begin assembling it from scratch, but once assembled you probably win the level, no fuss.
Weapon firing mechanics are also an improvement, and model textures are directly impacting the gameplay style, which is why Abyss showed special care here.

Tesla vs Lovecraft is everything you’d expect from the title. Nobody can be responsible for this much awesomeness from these two opposed each other, without creating a well balanced and playable game.
The twin-stick shooting extravaganza allure is back, and it is ready to get the blood pumping.

Tesla vs Lovecraft is everything you’d expect from the title. Nobody can be responsible for this much awesomeness from these two opposed each other, without creating a well balanced and playable game.