On March 26th. FoxNext released long expected 3.0 Update which ended the waiting for the most anticipated segment in Marvel Strike Force. Alliance War is finally upon us!

However, this update didn’t just introduce Alliance War but we also got 2 new playable characters, M’Baku and Okoye, and some minor glitches are fixed (Home Screen Button now reacts when tapped, etc…). Even though FoxNext announced that both Heroes will be released, only M’Baku can be seen in our rosters which means that we will have to wait for Okoye a little bit longer.

M’Baku is a new Wakandan character who entered the fray but at first glance, he is not as strong as we expected. If I had to make a comparison I would say that M’Baku is a mixture of Hulk and S.H.I.E.L.D. Security. According to the description from the announcement, he is supposed to be a robust protector who inflicts massive damage, but in reality, his damage output is mediocre at best. His base damage is great and his basic ability inflicts 300% of base damage when upgraded but he is slower then S.H.I.E.L.D. Security which means that he will not be able to utilize the advantages of this skill very often. His ultimate’s damage is not that great and that is his main weakness. It is import to say that M’Baku basic ability is undodgeable and that his ultimate can inflict additional damage if the initial strike kills the target but overall that is not enough for placing M’Baku along with other High Tier Heroes. It remains to be seen his usefulness in full Wakandan team, especially because it is obvious that Wakandan team will utilize Defense Up which strengthen M’Baku often, but if we look at him as a single character he is definitely not as good as we hoped. 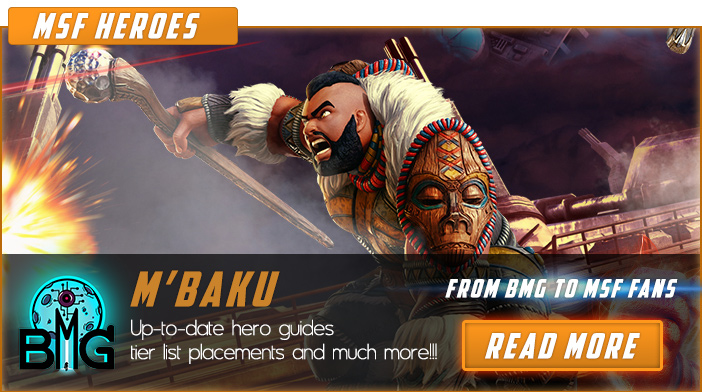 I must say that the Alliance War segment looks very nice at first sight.  I will not talk much about it at the time because the full comprehensive Alliance War Guide is in making progress and I will talk about every aspect of this MSF segment when I receive all pieces of information (in short after first Alliance War battle with my Alliance, which will be tonight). What I can say at the moment is that Hellcarrier has 12 different rooms which provide different defensive bonuses and that Alliance War Store will be the place where you will be able to farm MSF characters you weren’t able to farm before. Also, it is important to say that you will not be able to use Heroes who are placed in Defense for Offense so I suggest that you be extra careful when deciding Hero role. Every Hero will be able to attack only once in Offense but you will be able to decide how many Heroes you will lead in the fight which will grant you endless possibilities and strategies. I will try not to jump to conclusions but Alliance War is looking very promising and I can’t wait to start my first Alliance War battle. If you are an average MSF fan you definitely share my enthusiasm and you can’t take a smile from your face – it is true that we waited a long time but it seems that all was worth it.

Alliance War Guide will be ready in the next few days and we will share it through the social network immediately but you should check our MSF page in the case you missed the release.

All I can say in the end – The War Never Ends!