Tycoon-themed games seem to be the next trend on the mobile market and Car Industry Tycoon is an indie entry that uses the now established mechanics rather well. It is a one-man developed mobile game, with familiar gameplay, but this time adapted to the car industry. As the title suggests, you are in charge of a car factory, but that is just the gist of it, as you start from scraps and build up to full assembly lines. And, that’s quite a road to go on…

As mentioned, this game is developed and offered by one man named Adrian Zarzycki… 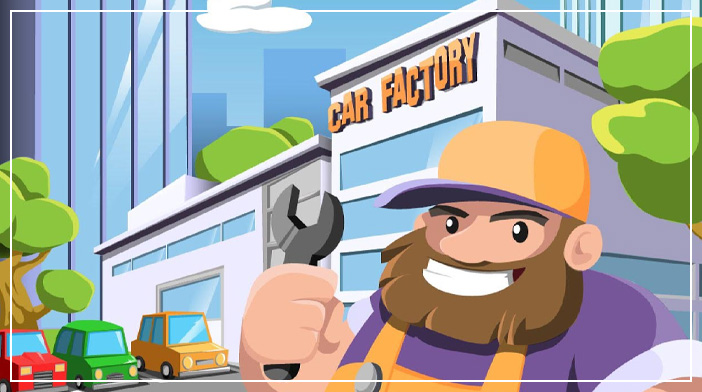 As mentioned, this game is developed and offered by one man named Adrian Zarzycki. This is not his first rodeo, for he also has two rather successful mobile games out already, Yeah Bunny! And Yeah Bunny 2. Both received very good reviews and have over 500 thousand installs on both Android and iOS, which is rather a high figure for indie development. Adrian also has a Tower Tycoon – Idle Simulator game app dished on solely for iOS, which enjoys a high 4.7-star rating.

After the success on that title, Zarzycki dished out his latest entry – Car Industry Tycoon. The game is made both for Android and iOS devices and it is doing rather well so far. On Google Play, it has a very good 4.0-star rating out of over 13k votes at the time of this writing, and it was downloaded over 1 million times, which is the developer’s record. On the iTunes App Store, Car Industry Tycoon iOS has an even higher score of 4.8 stars!

Like all simulations, the atmosphere in this game is achieved with a combination of the level of things you need to control and the enjoyment of watching your manufacture work like a clock… 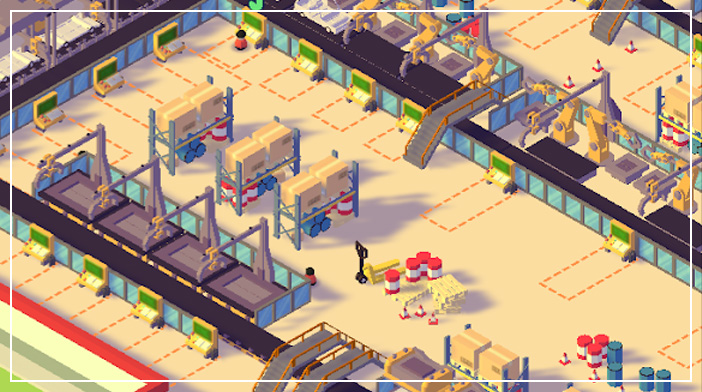 Like all simulations, the atmosphere in this game is achieved with a combination of the level of things you need to control and the enjoyment of watching your manufacture work like a clock while you just push the buttons. Here, this experience sort of starts slow, as the beginning steps in the game are pretty basic and there aren’t many things to do, but it winds up and builds up later on to a complex system. It really picks up once you start producing whole cars, but it takes a while to get there.

Being a simulation, this game really never strays from the well-established gameplay traditional mechanics of the genre… 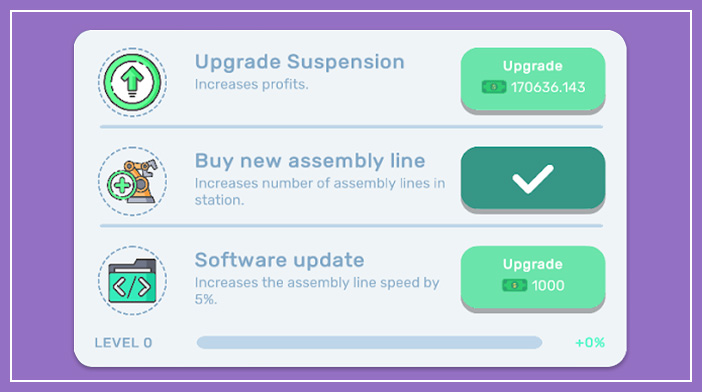 Being a simulation, this game really never strays from the well-established gameplay traditional mechanics of the genre. You view your car factory in a top-down manner and you control various aspects by taping them and then interacting with a separate window that contains info and offers stuff to do.

The goal is to build up your factory but to do that you must improve it and develop all its aspects according to each other, because it all functions as one big machine, with each cog playing an important part in it.

For instance, a good parking lot is every bit as important as your production reel. To do all this, you need money, and this is where it gets tricky. You only generate money when your product is ready and exits the production reel, but you have all these other cogs before that to work on and invest into.

This is why the beginning stages of the game will be filled up by watching ads mostly, to the point of it being annoying. Prices for advancement become too high pretty soon and you just have to get those x2 bonuses and flat cash injections you get by watching ads.

And, not only that but the game will actually come up with ad watching offers for separate aspects of the production you need. For example, if your production is going slow, you will get a +10 worker ad offer. Then, when you watch it, you will be offered to watch another one to make them check into your facility instantly, which otherwise is a time-consuming process.

And, after they are done, you will again get an offer to get them to leave instantly because you need to improve your Exit and Entry areas both. From time to time, an Investor opportunity will pop up, which is watching an ad for a flat cash gain.

These are the broad strokes, which are traditional for the Tycoon simulation game trend that has picked up lately. Controlling every aspect, from the parking lot to the production reel is your responsibility, and everything in-between. 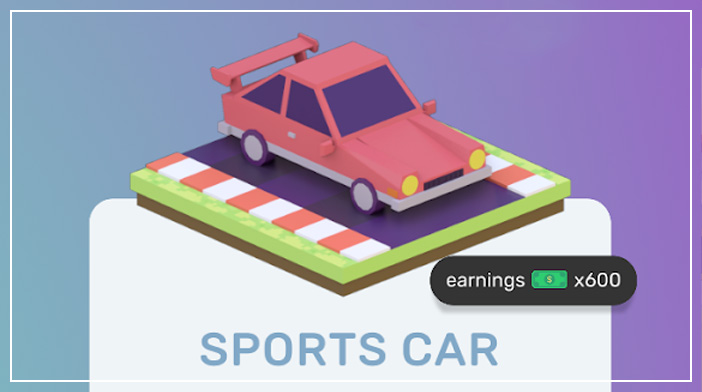 This is where it gets evident that the game is an indie game because it uses basic visual assets. All models are just 2D minimalistic creations, with simple coloring, no dynamic lighting, and very few animations what so ever. But, being a simulation game, it really does not interfere with the gameplay at all. In fact, it perhaps improves it.

Being such a visually minimalistic game certainly does have its upsides… 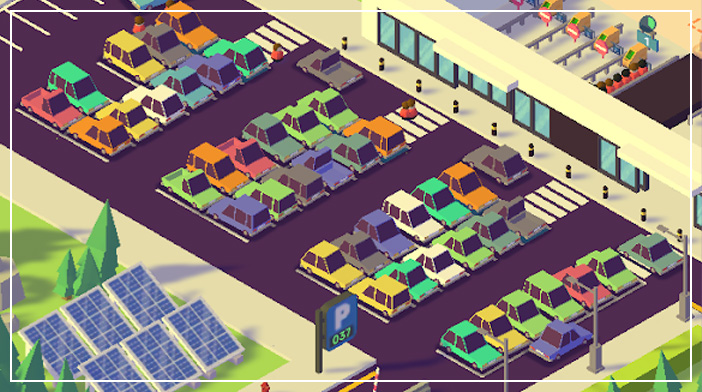 Being such a visually minimalistic game certainly does have its upsides. This title will run on virtually any mobile machine, as long as it can run iOS 10.0 and later or Android 6.0 or later. The install file is also not large, being around 50-100mb for most devices. The User Interface is also rather clear and neat, and the game is accessible even on smaller touchscreens.

As mentioned, pretty soon after you begin and start upgrading your facility, you will hit a soft paywall… 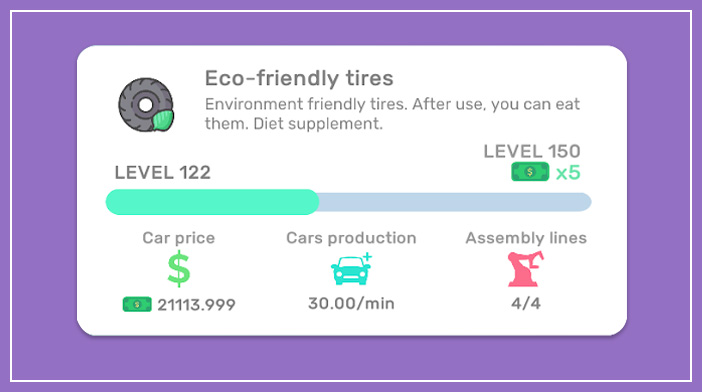 As mentioned, pretty soon after you begin and start upgrading your facility, you will hit a soft paywall. Cash is the basic in-game currency and you will need lots of it to advance. So, watching ads will become your bread and butter, if you are a free-to-play player, which I am. The other, premium currency, are the Coins, which are earned through doing quests or bought with real money and they speed up the gaming process greatly. Top-up prices range from $2.99 to $99.99.

Car Industry Tycoon certainly does its part to keep the tycoon simulation trend going and growing. It does have all the hallmarks of the genre, which are certainly what the fans of these kinds of games are looking for… 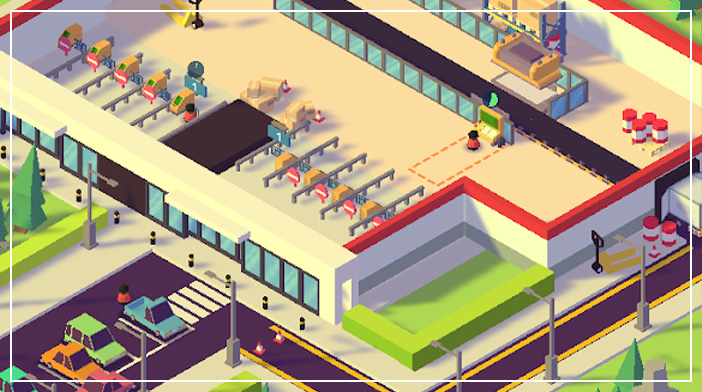 Car Industry Tycoon certainly does its part to keep the tycoon simulation trend going and growing. It does have all the hallmarks of the genre, which are certainly what the fans of these kinds of games are looking for. I would personally live fewer ads and more free-to-play freedom, but this is the only way this game can monetize so I can’t really blame the one guy who developed the whole game. He certainly did a decent job!

Car Industry Tycoon certainly does its part to keep the tycoon simulation trend going and growing. It does have all the hallmarks of the genre, which are certainly what the fans of these kinds of games are looking for 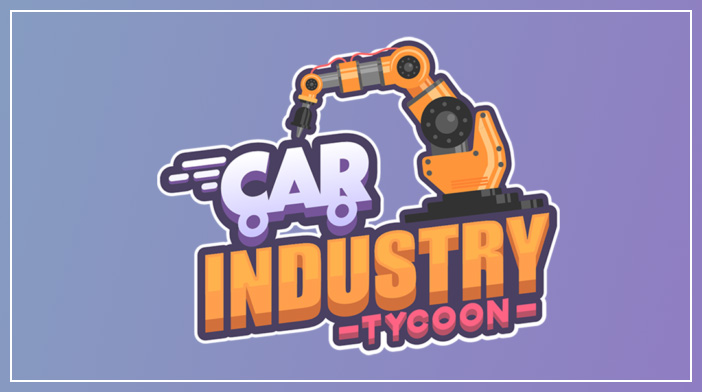 While this is a relatively recent game, the nature of the tycoon simulation genre does not leave much unclear. There are rarely any questions about the gameplay, which has been presented in a quite comprehensive way. However, people might want to know how to avoid certain things, like ad spam, or what to do when you reach the max level of your progress and you are stuck.

This may happen quite early on in the game, I’m afraid. As I talked about in the review but want to deliberate a little more, the prices of your upgrades quickly grow exponentially, so you will soon reach a soft paywall as I call it. You don’t have to purchase the premium currency, but you will need to wait. The game offers you to watch ads, but this will just lead to spam-watching them. And, ads have a cooldown as well, so this solution will pretty much be gone after you upgrade your factory’s segments to level 6 or 7.

How to money in the early game?

The prices will then jump to thousands, and quickly to tens of thousands. You will be inclined to spend Coins, but do not do so until you reach the max level in the end game and you want to try gunning for Prestige. This may sound a bit contradictory, but when you are stuck, you may want to just turn off the game and come back later.

Your workers will work for you while offline, with the idle mechanic working very easily here. They won’t riot or do anything to bring damage upon your enterprise, like in some other Tycoon games like Prison Tycoon for instance. So, you are safe to just chill and not stare at the screen all the time. All the money you earn while offline you can double by watching 1 add, which I highly recommend you do.

Then, just go in, spend the money you earned to improve your factory, and then just leave again. This game is designed to be played in short intervals a few times a day, no more. It is a chill experience, as I think of it. Of course, this goes for the early game. As your factory grows, you will have many things to do, manage, and consider, so you will have what to do when you come online.

Once you start rolling our more car parts and eventually whole cars, you will have no problem making profits. But, it is still quite a reach to get there. After you’re through the beginner stages, what you want to do in mid-game is focus on improvements from the Shop.

You want to consider stuff like More Energy, which improves the number of solar panels and PV profits, which multiplies the Solar Panel income. You can also go for Elite upgrades and similar things, but this depends on your overall upgrades to workstations.

Always watch ads that give you a worker boost. They will grow to +50 workers or more pretty soon, so always do them, even if you are not going to do the others to speed up their entry, press time, and exit. Also, focus on purchasing more assembly lines first. That is the priority for increasing your overall profits.

Since you will always be getting every Employee boost from ads, upgrade the rest area as often as you can, and other smaller upgrades like the Air Filter, Cooling System, VRLA type battery, Stronger Engine block, and the likes should follow up closely with the level. Also, always watch the ads from investors, for they will jump to billions in mid to late game stages.

Car Industry Tycoon certainly does its part to keep the tycoon simulation trend going and growing. It does have all the hallmarks of the genre, which are certainly what the fans of these kinds of games are looking for