At the moment, Epic Seven has over 1 million installs on Google Play alone… 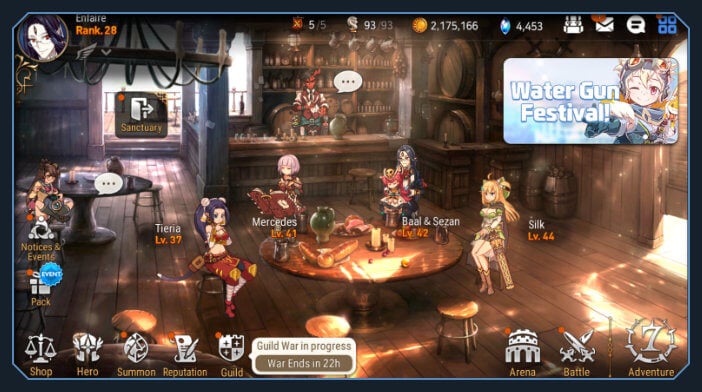 Epic Seven was developed by a South Korean video game developer, Super Creative, and published by Smilegate Megaport, a video game publisher from South Korea. The game was officially released on November 7th, 2018, and ever since then, it’s been met with positive criticism overall. At the moment, E7 has over 1 million installs on Google Play alone where it currently sits with an average score of 4.0 out of 5 stars, with over 220 thousand votes. On the iTunes App Store, E7 currently has 4.5 out of 5 stars review score with over 21 thousand user ratings. 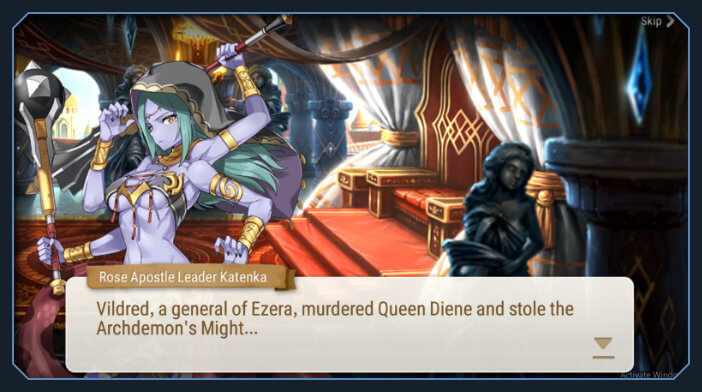 In this game, players take the role of Heir of the Covenant. This Heir is created by the Goddess of Creation, Diche in order to fight the Archdemon. The Archdemon was created by other Gods as a punishment for Diche since she neglected her duties following the death of her lover, Orbis. Each time the world got destroyed by the Archdemon, Diche used some of her power to completely reset it. However, each time, she grows weaker and weaker, and currently, this is the 7th iteration of the world, hence the name Epic Seven. Now, it’s up to players to gather a powerful army of Heroes and defeat the Archdemon once and for all.

From the get-go, players will notice the unique aesthetics of the game. Unlike many other games of its genre, the game has a distinct Anime feel, and all of the characters are created with amazing attention to detail. All of this will make players feel like they are watching some high-budget Anime, and truth be told, it greatly adds up to the overall immersion and atmosphere of the game. Cinematics of the game are all done incredibly well, and they complement the overall Anime feel. In fact, with each passing chapter, players will be interested to find more about the story, and it all plays out much like episodes of some high-class Anime.

In addition to this, the special abilities and skills of most characters have unique mini-cinematics tied to them, which further adds to the immersion. Granted, some of these may become a bit repetitive after a while, but kudos to the developer for going the extra mile just to make these amazing visuals. It’s also worth noting that many of the dialogues in the game are fully voiced, which is another huge bonus when it comes to the atmosphere of the game. 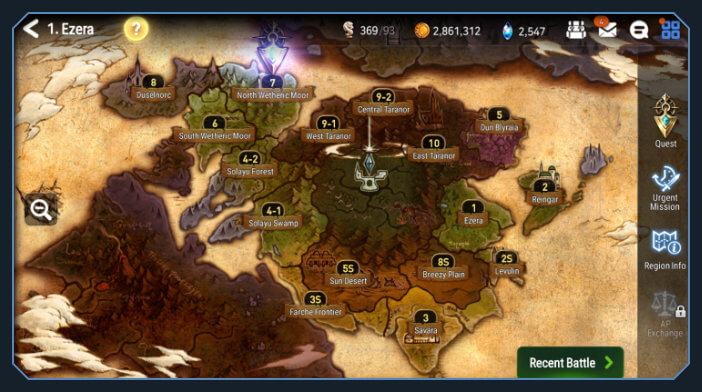 The game’s combat system is fairly similar to the one present in other Hero Collecting Role Playing Games (aka Gachas). During fights, you can control up to four different Heroes. The combat is turn-based, and the Speed stat of each Hero will determine when will they play during combat. Each of the Heroes possesses several different abilities they can use during combat. Other than that, there is a Rock-Paper-Scissors element system present in E7. There are five different elements in the game. Each Hero is tied to a certain element, which is strong against one other element while being weak against another.

While not actively in combat, players will generally be placed inside the in-game tavern, which serves the purpose of a lobby. Here, players will have their recently used heroes sitting and relaxing, while waiting for their next assignment. Also, this is where players can access most of the game’s content such as Hero menu, Summon, Reputation, Guild, Arena, etc. There is also an option to access the Sanctuary, which is a place where players can create certain buildings that will serve a unique in-game purpose. Some of those buildings can generate various in-game resources and upgrading them will increase their efficiency. Other buildings will create certain creatures players can use to enhance their heroes. There is also a building in which players can craft various gear for their heroes to increase their combat capabilities.

As the players progress through the game, additional content will become available. Players will eventually be able to join Guilds, where they can donate resources for one another, gain special crests, and various other resources by partaking some guild activities. Also, those who are eager to test their skills against other players will be able to enter Arena, where they can take part in some PvP activities and earn certain rewards by doing so.

Epic Seven possesses amazing graphics, and it really is an eye-candy, especially if you are an Anime lover… 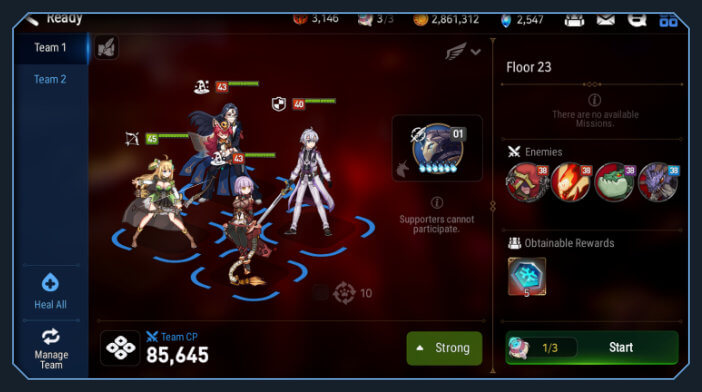 As mentioned before, Epic Seven has quite a unique art style, highly reminiscent of an Anime. All of the characters are designed with very high attention to detail, and it’s easy to notice that the developers tried their best to make this game very aesthetically pleasing. Characters are nicely animated, and many of the special moves have mini-cinematics tied to them, which look like they’re taken straight from the Anime. The only downside is that some of the animations are way too colorful, and at times, it can be a bit stressful to look at those. In other words, some powerful abilities will cause your entire screen to become an extravaganza of fireworks and explosions. Nevertheless, E7 possesses amazing graphics, and it really is an eye-candy, especially if you are an Anime lover. 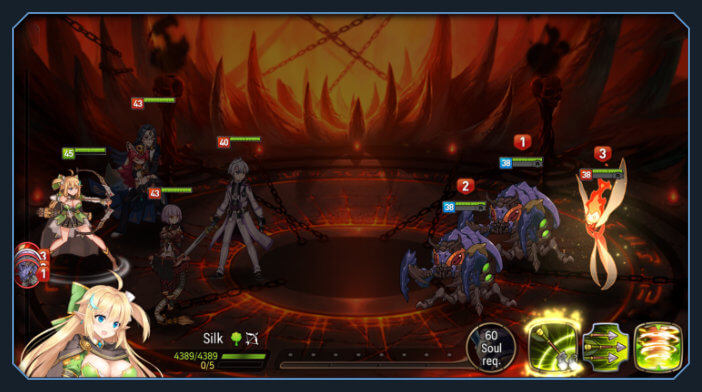 Despite looking amazingly well, E7, in fact, doesn’t require powerful hardware to run smoothly. The minimum requirement for Android users is at least an Android 4.4 compatible device, which at this point is very easily affordable for most users. As for iOS users, the bare minimum is iOS 9 compatible device, which isn’t too high of a requirement. It’s also worth noting that the game is very well optimized and it runs smoothly on most supported devices, so hats off to the developers for doing their best to optimize the game for a wide variety of mobile devices.

Epic Seven is entirely playable as a F2P player… 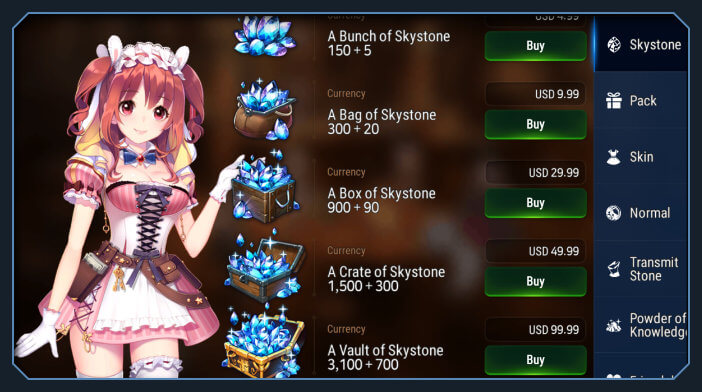 While most Gacha games are not too friendly when it comes to Free to Play, Epic Seven is entirely playable as a F2P player. While progressing through the early stages of the game, the game will be more than generous when it comes to awarding Skystones to players (the game’s premium currency). As long as they know how to use this currency optimally, and don’t waste it, even a completely free to play player can be competitive in this game. However, other than using in-game resources optimally, it is very important to be an active player and play the game on a daily basis. This will allow free to play players to progress through the game much faster, and eventually clear most of the game’s content. 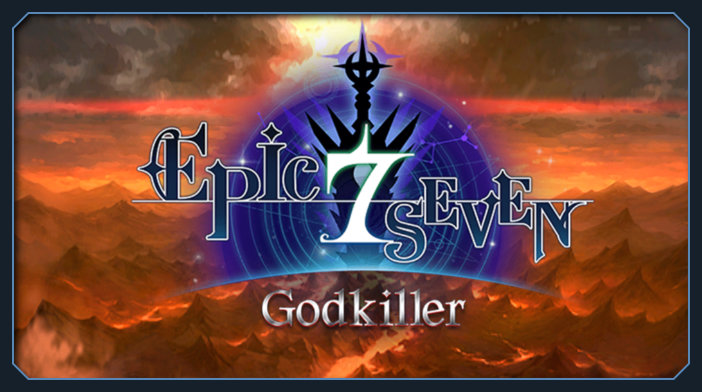 While not being too different from other Gachas when it comes to basic gameplay and combat, Epic Seven is probably one of the most story-rich Hero Collecting RPGs on the mobile market. Its unique aesthetics and amazingly detailed art style are what separates it from other games of the same genre and it makes it a must-play for all Anime lovers. 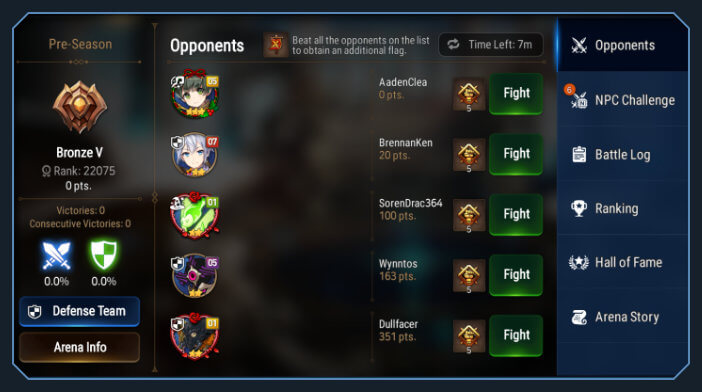 Epic seven is truly an epic game that you shouldn’t miss out on. In the next segment, we put together a compilation of tips and guides for new and old players, and we hope it will make your gameplay enhanced and more fun! Enjoy!

Use the links below to jump to the guide sections.

How to get Mystic Medals

Mystic Medals are one of the most sought after resources in the game and for a good reason. These are used to summon some of the most powerful Heroes, but their availability is fairly limited, especially for free to play players. The most consistent way of obtaining those would be playing the game on a daily basis and participating in Guild Wars. Based on the outcome of a Guild War, players will receive some of these Mystic Medals as a reward. Luckily, there is another way of obtaining them. Once the Secret Shop is upgraded to the maximum level, players can sometimes be able to purchase Mystic Medals from it. This will, however, require a good amount of Gold. For those that are impatient, they can also use Skystones to refresh the shop, instead of waiting for it to refresh on its own, but as a general rule, be sure to keep an eye out for Mystic Medals in the Secret Shop, since this is a good way to obtain some of these. Lastly, those with deep pockets can purchase Mystic Packs from the store, and this is the easiest (albeit a bit costly) way of obtaining Mystic Medals.

How to get Stigma

Stigma is a valuable currency that lets you immediately grow creatures in the Forest of Souls. There are numerous ways of obtaining Stigma. First and the most consistent way of getting Stigma is by doing Battle in the Abyss. Other than that, Stigma is often rewarded from missions. Players can check for these under the Reputation section. Lastly, there is the option to use some of the Skystones to purchase Stigma in the Shop.

How to get Powder of Knowledge

Rerolling is a process of entirely resetting the account in order to gain desired heroes from the starting rewards. Upon completing stage 1-10, players will be granted the ability to use Selective Summon. This will allow them to summon ten heroes for free and if they don’t like the results, they can try again up to 30 times. If after these, players still don’t end up with the heroes they desire, they can ‘reroll’ their account by using the Reset Server button under settings. While using these Selective Summons, players should be aiming to get some of the following heroes: Vildred (amazing farmer, has a lot of AoE skills), Ken (very tanky hero capable of buffing himself while also scaling with HP), Iseria (amazing hero for mid to late game since she can reduce the cooldown of one of her allies), Ravi (tanky bruiser capable of dealing a lot of damage).

How to Unlock World Difficulty

During Patch Released on June 12th, 2019, World Difficulty was ‘kind of removed’. Actually, it wasn’t really removed, but it was renamed to Unrecorded History and moved under Side Story that is always available.

How to use Ego Fragments

Ego Fragments are items that allow players to change imprint of heroes. Basically, Ego Fragments will increase imprint bonuses on heroes they are used on, but they will cause the imprint to only affect that hero instead of affecting the entire team. In order for players to use Ego Fragments, they need to click on the Imprint icon on the bottom left part of the hero’s page.

How to get Dizzy and luna