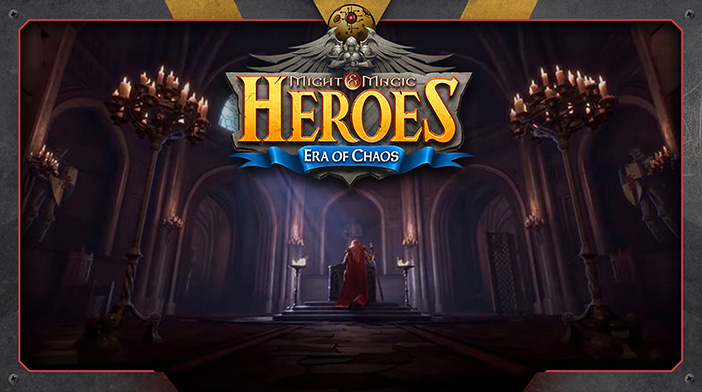 All fans who expected that they will get a classic HoMM game on their mobile devices may be disappointed at first since this game is totally different than its predecessors. It is optimized for mobile gaming, meaning that you will need to farm Units and Heroes to play with them, or in other words, you will be able to spend money for faster progression. If I had to name the genre of Era of Chaos I would say that this game is where classic Gacha meats Heroes of Might and Magic in its best possible synergy. I know that this fact will immediately turn off a lot of HoMM fans but I strongly suggest that you give this game a chance since it is amazing in so many ways that you will be totally drawn in it in just a few hours of playing. I am talking from my own experience as a veteran player of HoMM franchise and someone who had the notice “Here lives the Hero Master” above his doors in a student apartment written by his fellow HoMM adversaries.

The game starts with the story of the famous Castle Hero Catherine and her returning to Erathia. After a short tutorial where you will learn the basics of combat, you will start your journey in an attempt to assemble the strongest army on the server and finish all campaign missions. The first thing that you will notice is that you practically do not control your troops in battle. You just pick their formation and then they fight alone like in a lot of other Idle games. The only thing which you control during the battle is the executing of Heroes spells but that doesn’t mean that there are no tactics or strategies in Era of Chaos because before every combat you will have to place your units in the proper formation which will decide the outcome of the battle. 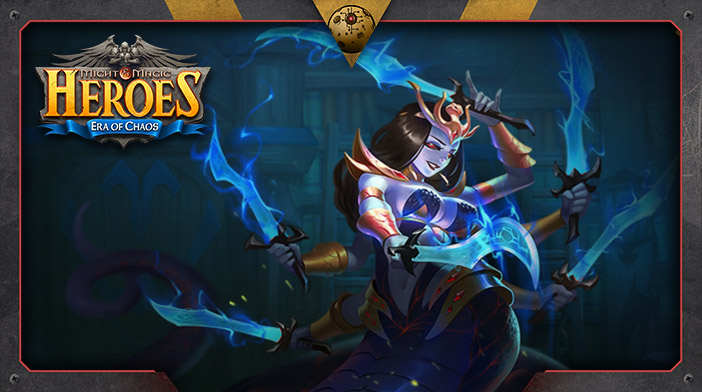 There are 5 different unit types:

At least 5 different units are in each type and every unit has its unique skills. Those units are also divided by their Faction affiliation and currently, 6 factions are implemented in the game – Castle, Rampart, Stronghold, Inferno, Necropolis, and Tower. As you can see there are no Fortress, Dungeon or Conflux units, although it is possible to buy Phoenix that is the only unit that is available beside implemented and already mentioned 6 Factions. All in all, each faction has 7 original units from HoMM plus Phoenix which is 43 different units in total at the moment. I do not doubt that developers will introduce other units from the franchise in every update and that at some point we will have all legendary HoMM troops in the game.

Every unit type has advantages and disadvantages on the battlefield:

Defense – Defense units can sustain a large amount of melee and ranged damage but on the other hand, their damage output is mediocre.

Charge – Charge units are a lot faster than Attack units and if they are in line which is not protected by enemy melee unit, they will immediately charge towards enemy ranged and caster unit.

Ranged – Range units support the team with incredible damage output but their survivability is minimal so it is of utmost importance that they are protected all the time.

Caster – Caster units are similar to ranged units but they do not deliver as much damage as ranged units do. On the other hand, they can buff allies or debuff enemies with powerful status effects. 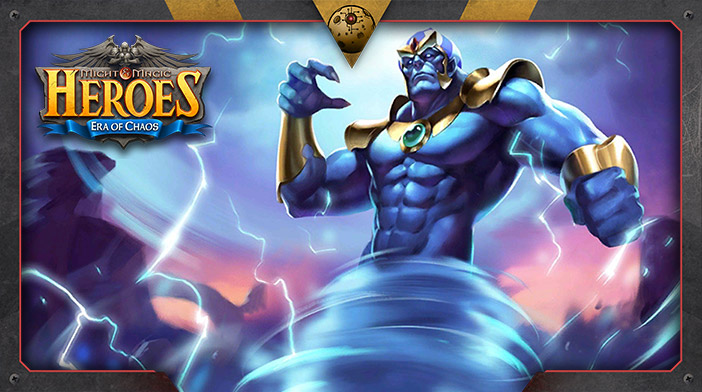 Units are led by the Hero who has a specialty and 4 spells. There are currently 14 heroes in the game currently and each of them is described on our Hero page. Spells can be used manually during the battle and every Hero has a unique set of spells – 3 basic spells and 1 unique spell which can be used only by him. Like in HoMM, Heroes have 4 main attributes – Attack, Defense, Intelligence and Knowledge. However, in the Era of Chaos, Knowledge represents Hero’s capability to resist magic instead of mana. Those attributes affect every unit by enhancing their main abilities. Hero also has masteries which can improve his skills or spells. Those masteries are identical to Hero’s skills in the original game.

For acquiring or upgrading Units and Heroes you will have to collect their shards. Units start with 1, 2 or 3 stars while every Hero starts with 1 star. For each new star, you will have to collect a certain number of shards which number is gradually increasing. The number of stars increasing the overall power of units or Heroes but that is not the only thing that affecting their strength. Units also have a gear that can be upgraded several times improving the quality of the selected unit. Quality of units is represented in colors (white – lowest quality, green, blue, purple, orange – best quality) and it can be upgraded as you collect materials needed for gear in campaign missions or reward chests. Besides that, you can improve the strength of your units by enhancing their talents or upgrading their skills. Hero’s strength is measured by the level of their spells and by the artifacts you collected. All Heroes share artifacts you found during the game and they will automatically use them when you put them into combat. Improving Heroes is not as easy as improving units, so you will have to decide which Heroes should be prioritized. 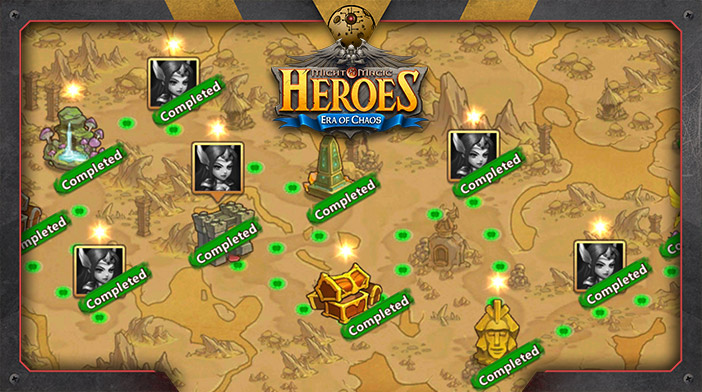 The Era of Chaos offers numerous different game segments to keep the player occupied. World Map leads you through the story by completing missions in different Chapters. Underworld is similar to World Map, only it has fewer missions in every chapter and unlike World Map, missions can be repeated limited times per day. The Shipyard offers you to explore islands around Erathia where you will collect materials for building well-known buildings from every Faction in order to speed up the farming of the unit’s shards. Trial of Angels challenges you to beat numerous stages where your strategy and wit will play the most important role in dealing with enemies. When you join a Guild you will be able to play Guild Adventure which is similar to the original HOMM map and where every player from a guild is one Hero on the large map. In Guild Adventure you will be able to explore the map, collect resources and chests, fight monsters, solve riddles, travel to portals and everything else that you could do in HoMM 3. The Campaign is another segment in this great game where you will face at least 15 enemies every day as you strive to finish it and collect artifacts as you progress. Training Ground is the place where you will learn how to use your units and Heroes. You may think that missions in training grounds will be easy as the name suggests but, trust me, you will be positively surprised. Colossus represents the PvP element of the game where you can try to compete with other players in the chase for glory and fame.

Like in other gacha games you will have daily quests, general quests and you will be able to summon random units every day depending on the number of Diamonds you spend. The pay-to-win element exists, but it is not that important because you will have a lot of interesting things to do every day.

The Era of Chaos offers everything you should expect from the mobile game. If you give this game a chance, I promise that you will be drawn into the game immediately and that you will log in every day in an attempt to make the most powerful HoMM Army there is. Hardcore HoMM fans will definitely be disappointed at first glance, but I am sure that they will be blown away after just one hour of playing.

This game has a great future and that is the reason why BlueMoonGame will feature it fully. On our pages, you will find Guides, Heroes, Units and Tier Lists. Every new update and introduction of every new Hero or unit will be implemented on our pages immediately. Enjoy! 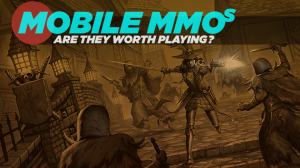 Mobile MMOs: Are They Worth Playing?

With better technology improving smartphones everyday, there is nothing that you can’t do on a [...]