PACYBITS FUT 19 Is a football manager simulation which combines the elements of team building and card trading. In the previous two editions, those two elements were launched as separate games, but this year’s iteration ( which carries the number of the next year, as seen in football games) has both management and card trading merged in one game. The purpose of this article is to focus on the tactical aspect of this game and provide you with some tips and tricks for building the best team.

Let’s start with a drafting order. Start your draft at the outside, go in the inside and then go back to another outside. Why this order? Because it is usually the case that the players in the center of the formation have the highest number of links. Therefore, they affect the chemistry of a lot of players in the formation and they need either strong links or a lot of weak links to get a good chemistry. Hence, it is key to connect them properly. With the outside-inside-outside method, you get two chances to get links to the players in the center.

Don’t forget to use the substitutes. When you are struggling to get proper links with the outside-inside-outside method, you should draft players on the bench to look for alternatives. But now comes the kicker: the positions on the bench are associated with the player roles! Position 1 is always a goalkeeper, position 2 & 3 are defenders, positions 4 & 5 are midfielders and position 6 & 7 are attackers. You can use this to directly take a chance on the bench to get the right players for the positions that you are struggling at the moment in the draft.

It’s advisable to make these changes immediately. You should do these changes right away to keep an overview over your draft (what leagues or nationalities are you looking for in future players). If you are not doing it right away, there is a higher chance that you will miss some opportunities to get a strong link, because you are not aware of it

Sometimes you have the choice between players that do not offer any link to already drafted players. So, what kind of player should you choose? You should prefer players that play in a league or have a nationality, that has a higher number of good players. That way you will have a higher chance to draft good players in the next stages that link to your player. Just a small example: the BPL has 58 players with a rating above 80, the Russian League has 5 of them.

Legends are universally a good choice, not only because they are, well, legends and have a high rating, but also because they have at least a weak link to every player in the game. Hence, it is very easy to fit them into your team.

Make sure that your formation has all types of positions. Some formations do not contain wingers (i.e. 4312) or fullbacks (all formations with only 3 defenders). Even though you have such a formation, you will get the option to draft wingers/fullbacks. Well, in the ends this reduces your chances to get proper links or good players since you should not draft these players (you don’t have a good position for them). Therefore, you should prefer a formation that contains all kinds of position-types (GK, CB, LB/RB, CDM/CM/CAM, RM/RW/RF, LM/LW/LF, CF/ST).

Substituting the players is already a common technique in FUT for some years. Still, you can do it in FUT to play with players that do not fit in your starting eleven because they don’t have good links or they do not fit in position-wise. At the moment, we cannot say how will this affect the chemistry of the substitute player or of the other players on the pitch.

Considering FIFA draft is based on drafting/arena styles of play from CCGs like Magic and Hearthstone, the methods we described is taking some principles of deck building from those games. It might not make sense to some people, because building a team in normal play (like Hearthstone’s constructed decks) is usually about building a team with good chemistry, but for the draft, you have to (for the large part) throw that away. 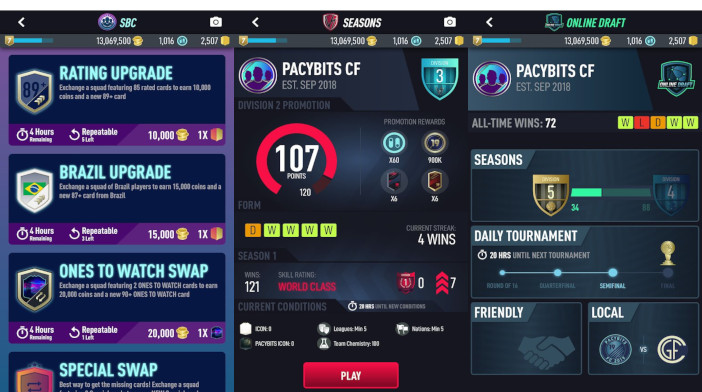 You do not want to try to build “combos” of players early on unless you can link them right away. This is because you cannot be assured you will get appropriate players to link up with decent chem. Instead, you should choose the most powerful player and then choose players around them. This has parallels in Hearthstone where there are some cards which work well in conjunction with each other, but you can’t be assured that you will get the whole combo, and individually the cards are not very strong – so you should tend towards cards which are more versatile and work in more situations.

Conversely, there are players who will be strong regardless of links. They should be auto picks. In FIFA, if you see Ronaldo, Messi, Robben, Bale, Suarez, Aguero etc etc etc you should pick them regardless of chemistry because Messi on 6/7 chem will always be a better player than most other strikers on 8/9 chem. Parallels in Hearthstone might be Dr. Boom, Sylvanas or Tyrion.

As you might have noticed, team building in this game is based less on the players’ stats and more on links and compatibility between the players. These tips and tricks should be only a foundation for building your own play style and tactics, not the lore strict manual. But implementing everything you read here will save you a lot of poking in the dark. With that said,  we wish you to enjoy the game to the fullest.