RAID: Shadow Legends is another Plarium baby which managed to amass a large community of dedicated gamers. From a distance, it seems that the game’s integration of familiar turn-based mechanics and role-playing style paired with highly advanced visuals is credited for this. Digging a little deeper reveals that this game offers more than it meets the eye, although it is a pretty sight all the same.

Plarium is based in Israel and it is a developer focused on social, web-based, mobile content most commonly in the MMO section. They have experimented and succeeded in creating some pretty good titles in various genres. Their highlights are Vikings: War of Clans, Soldiers, Inc, Terminator Genisys: Future War, Stormfall, Sparta: War of Empires, Total Domination, Throne: Kingdom at War, and others. 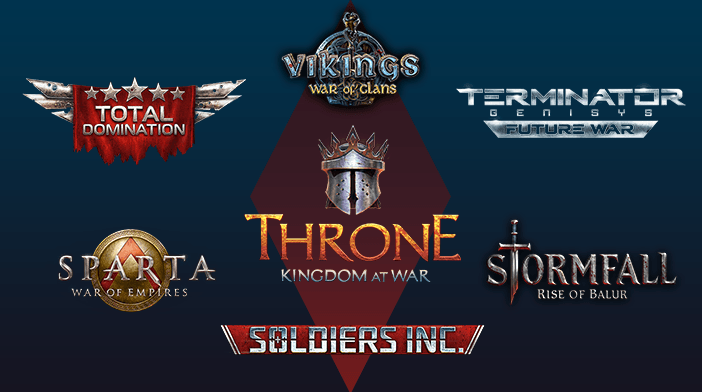 Their main seat is in Herzilya, but they have representations in Russia, Ukraine, US, and the UK.

Stormfall and Soldiers, Inc were a particularly lucrative financial success as the games were the fastest growing in their respective years of release.

The game greets you with a sudden and quick tutorial, which is more like a display of power. You join 4 champions, each is its own combat role, and you follow them through a few battles. They talk something you ignore, you kill some creatures, and then a dragon eats and burns them alive, just as you’ve grown fond of them. A virtual stab in the heart, if you will. 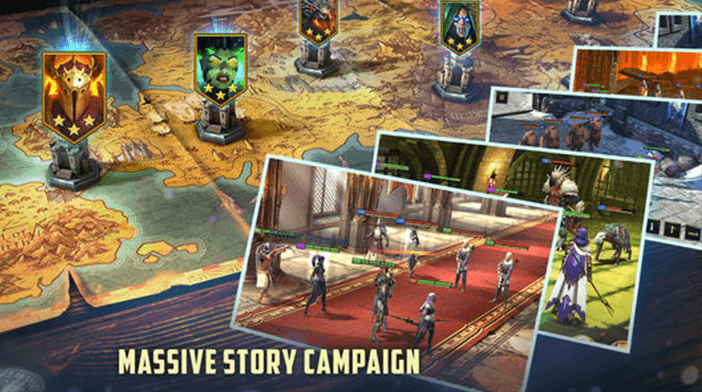 Just before they died, one of them yelled ‘For the Arbiter!’and died… You are then greeted by the Arbiter, who is a good looking redhead btw, as she lets you choose one of these 4 champions who died in act I. She then explains the basic plot:

Teleria, the world we are in no doubt, is dying as it is ravaged by discord and war. The Arbiter names dark forces and their leader Siroth, like the perpetrators, who spread a ‘foul Shadow from the East’.

The Arbiter then reveals it is her role to be the guardian but her power is veining and she has little left to do. This is when you, the player, come in. The Arbiter offers to restore one of the 4 fallen champions to life and as their soul (Shard) is remade they will be bound to your will. 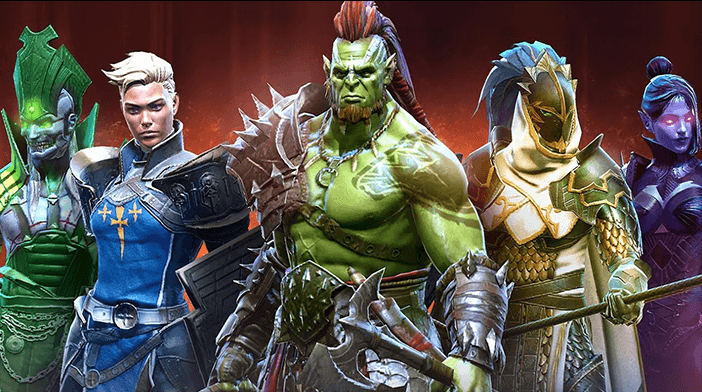 After you’ve chosen your first champion, you are taken to the Bastion, which is your base of operations. Much like in similar games, this is your home base in RAID: Shadow Legends – the place to do the stuff out of combat, like arranging your champions, teams, leveling buildings, skills, and stuff.

You immediately learn the single most important mechanic of the game, which is using Mystery Shards to summon other champions at the Portal. 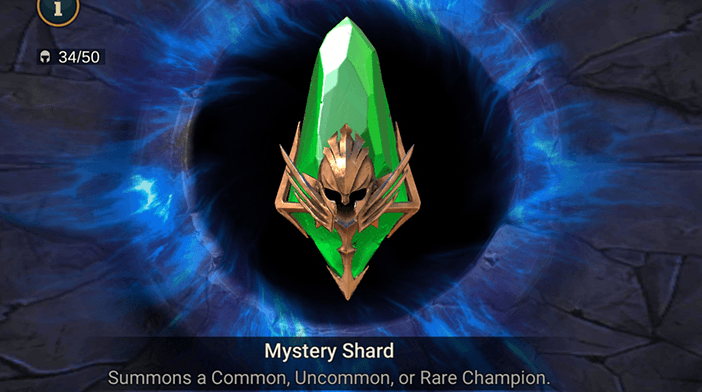 Champion factions are as follows: 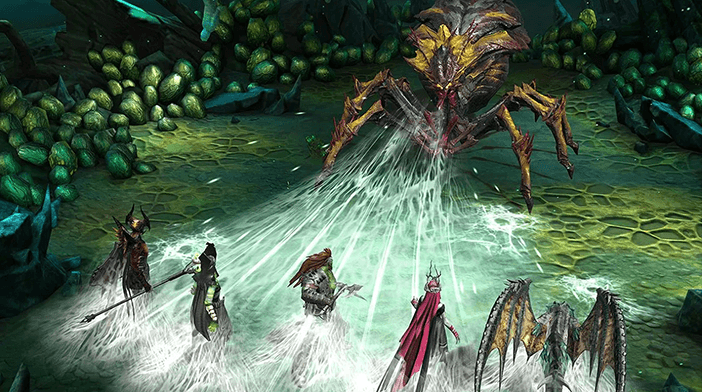 After you’ve chosen your first champion, you are taken to your first test battle which marks the beginning of the campaign story, and it goes like this:

Your story begins at Kaerok Castle, the seat of the kingdom ruled by King Tayba. The king has reportedly fallen to shadow along with his banner lords. They were once noble, but have now betrayed their allies and people. Your task is to fight through his banner lords, go to the King directly and see if Siroth indeed turned him.

You then learn peace of RAID: Shadow Legends history, as it seems that 11 generations of the peace ruled between the kingdoms, which King Tayba’s betrayal broke. He has imposed crushing taxes and ruined his own people and allies. Thus, the Arbiter tasks you to find out what befell the once noble king Tayba.

Raiding the castle is much like any other combat stage in similar turn-based hero collector games. You go through several stages, each with increasing difficulty and culminating in a boss fight. Each battle expands energy, which is also a familiar gameplay mechanic. 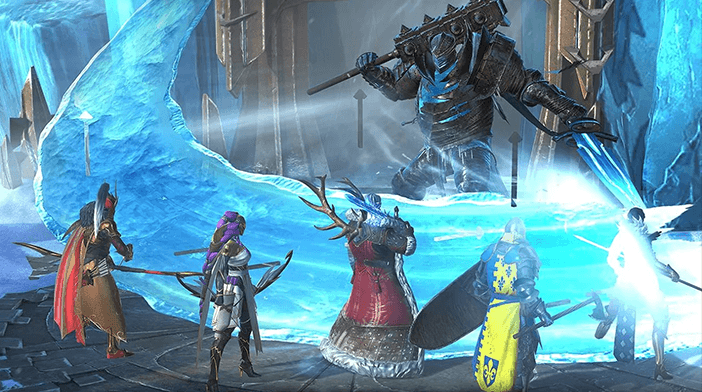 Before the battle, you can review the enemy champions and select your own team members to match the enemy skills. This is also a pretty standard rock, paper, scissors mechanic utilized in numerous similar games, and in RAID: Shadow Legends it goes like this:

Magic beats Spirit, Spirit beats Force, Force beats Magic. The 4th affinity, the Void, is excluded from the equation and does not have a weakness to any other affinity.

Affinity advantage means that an attack with the advantage will deal more damage and have a higher chance to do critical bonus damage.

Winning a battle earns you experience, items, and other resources needed to advance your champions and your base of operations. Champion items come in sets and provide set bonuses. 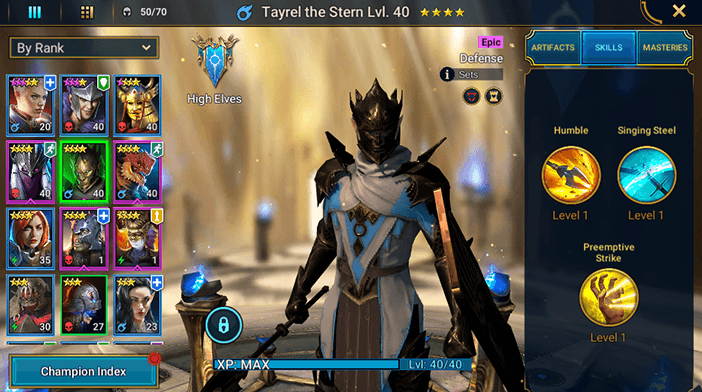 This game’s artwork is impeccable. It is definitely its strong suit. Each champion you review in the Champion Index Faction page can be view in full 3D environment. You can circle your camera around him or her and even check out reviews and item recommendations for each champion, all integrated into the game. Despite all being said, the game will not overburden a decent mobile device. Everything above 2GB RAM should do fine. The game won’t take up more than 100mb of your memory while you are in your Bastion, while combat modes may take up a bit more.

This game is still considered to be in its infancy, so the best time to try it out is now. It is immersive and offers a lot of content. However, it is rewarding in a sense Summoner’s War is. It will offer a good chance to customize your gameplay, offers plenty of cool looking champions, and has an underlying story well integrated into the gameplay.

This game is still considered to be in its infancy, so the best time to try it out is now. It is immersive and offers a lot of content. However, it is rewarding in a sense Summoner’s War is. It will offer a good chance to customize your gameplay, offers plenty of cool looking champions, and has an underlying story well integrated into the gameplay.