I woke up thinking: “Today is just another day at Hogwarts, a day like any other so far.” The search for Jacob had left me so worried… worried about what might’ve happened to him in these past few years. I tried my best, but for some reason, there isn’t much to go on with, and with so many things on my mind, I barely had any time to focus on my studies, let alone something else.

“Come on, Dylan! We’re gonna be late!” I heard from the other side of the dormitory. “Wake up, silly, everyone is already in the Great Hall, waiting for us!”

Ah, Rowan. My dear friend. What would I do without him? He is always so cheerful and happy. I guess I could get up instead of laying in the bed all day.

“Quickly!” he said, this time with a louder, more demanding tone. “Christmas isn’t going to wait for your laziness, you know…”

“Oh, I almost forgot.” I said with the sudden realization. All those worries about the cursed ice and Jacob left me a little time to think of anything else. “Go on without me, I’ll be right there.”

“Dylan…” he said with the serious look. “Don’t make me come back here for you!” and then he went on hurriedly, like the entire herd of bloodthirsty Chimaeras is after him.

I looked through the window as I was dressing up. It’s been snowing for quite some time. I guess that‘ll be a nice addition to the holiday spirits. “Does she like snow?” I thought to myself. “Perhaps I could ask her later…”

As I went down the stairs, I realized how vast the halls of Hogwarts really are. One doesn’t really pay attention when there are so many students running around, but today, the halls are so empty, full of loneliness…

“Good morning, Mr. Edwards.” I heard the voice behind me as I was going down the stairs. “It’s nice to see a familiar face on this lovely day. The Halls of the Castle are usually quite empty this time of the year.”

“Good morning Sir Nicholas. It is nice to see you too.” I replied politely.

Sir Nick is likely the kindest ghost in the entire Hogwarts. Although, I haven’t met the Fat Friar yet, so I shouldn’t be quick to judge. I heard Penny often saying so many nice things about him.

Finally, after walking for a while, I entered the Great Hall. It was surprisingly empty. Only a handful of students were there. I quickly gazed across the magnificently decorated Hall and saw Penny and Rowan smiling about something. Tonks, Charlie, and Bill were sitting across them, cheerfully discussing some joyful subject. And then, on the other side of the hall, she was sitting… all alone, away from the others. She didn’t want to indulge in their conversation, I guess she enjoyed the loneliness more. But there was something in her eyes, I couldn’t quite see it from the entrance, but it seemed like she was upset about something. My heart raced as her gaze crossed mine. She quickly turned her head around and returned to her solitude.

Now that I think of it, I couldn’t quite comprehend what was it that drew me to her so much. After all, she was never kind to me. On more than one occasion, she tried to sabotage me. She threw insults at me every chance she had. And more than once, she tried to get me expelled. Yet, still, something is drawing me towards her. Maybe I am going mad, just as she said before. Maybe this entire situation with Jacob’s disappearance is taking a toll on me… Maybe I…

“Are you all right, Dylan? You look a bit down…” Bill’s voice suddenly snapped me out of my thought.

“I just miss my mum. She’s staying with relatives in America, so I won’t be able to see her this Christmas.” I quickly came up with an excuse. To be fair, I did miss my mum. I prefer spending Christmas holidays with my family, but this year it was an exception.

“I understand.” Bill replied. “I always miss my family as it gets closer to seeing them at Christmas.” 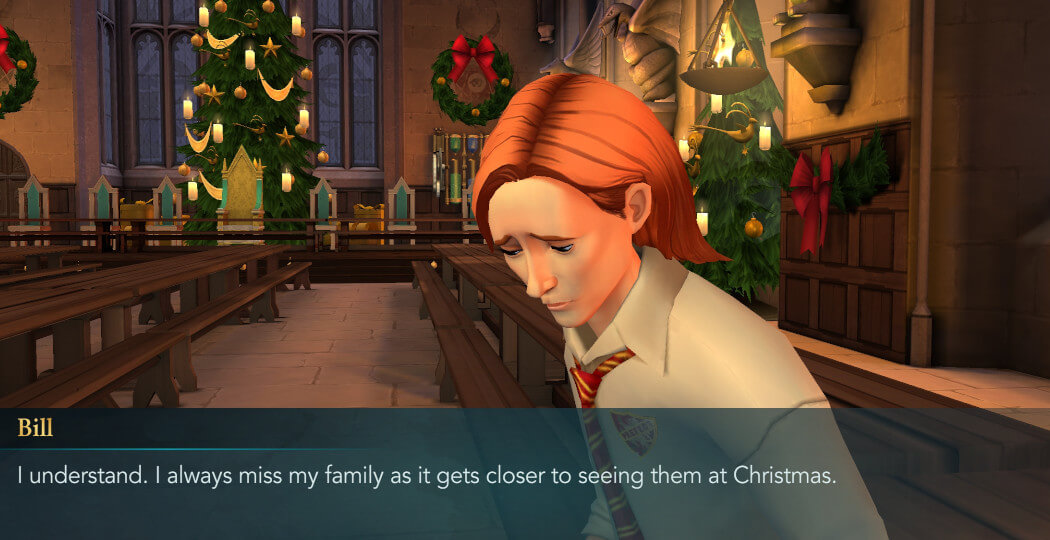 “You know what I mean, Charlie.” Bill said back to him.

“I’m surprised you two didn’t head home for the holidays.” I asked them. Weasleys are one of the most loving and caring family I’ve ever met, and it was quite a surprise seeing the two of my friends spending their Christmas Holidays at Hogwarts.

“Apparently, Fred and George wrecked The Burrow. Mum says it isn’t safe to come back until everything is fixed.” Bill replied with a worrying look.

“I suppose it’s best for them to get it out of their system before coming to Hogwarts.” Charlie said, wondering if his siblings will ever change.

“What can we do to cheer you up, Dylan?” Bill quickly changed the subject. 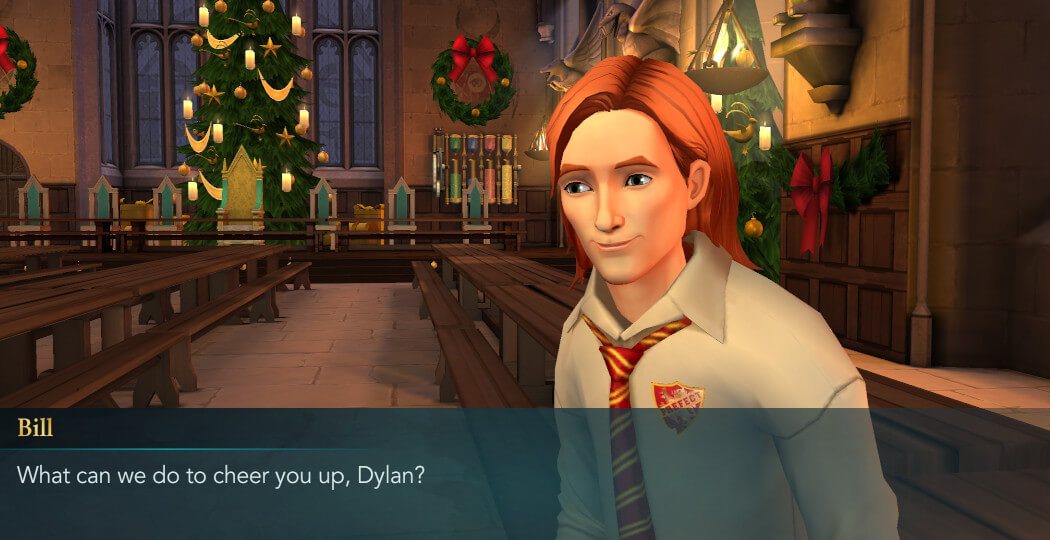 “I don’t want to talk about it and ruin everyone else’s Christmas.” I replied. Truthfully, I couldn’t tell them that I’ve grown to care for her. To make things worse, she’s been sitting there all alone, worrying about something, and I just couldn’t get myself to approach her and ask what’s the matter.

“Let’s hear about everyone else’s plans…” I quickly came up with an excuse to distract them from my own problems.

As they were talking to me about everything, I pretended to listen, simply nodding and using every opportunity to glance in her direction. She’s still sitting there,… alone,… occasionally throwing a gaze at us. Could it be that there is something she wants to tell me? Then, suddenly, her deep, purple eyes met mine while Charlie was talking about his mother’s cranberry sauce.

“I should have known you would be one of the only people to stay at Hogwarts…” she said to me across the Hall and quickly averted her gaze. The others didn’t seem to notice me looking at her. Or, at the very least, they pretended not to notice.

“It sounds like we’re about the only students who decided to stay at Hogwarts for the Christmas holidays.” I stated the obvious fact, hoping it will distract them enough from noticing anything.

“We have the castle all to ourselves…” Tonks replied, with a wicked grin on her face.

“Imagine all of the reading we can do!” Rowan said, full of excitement. Oh Rowan, is there anyone else at Hogwarts who shares such enthusiasm for studying. I couldn’t help but smile back at him, he was always there for me when it was hardest. I sometimes feel I don’t even deserve his kindness and friendship. 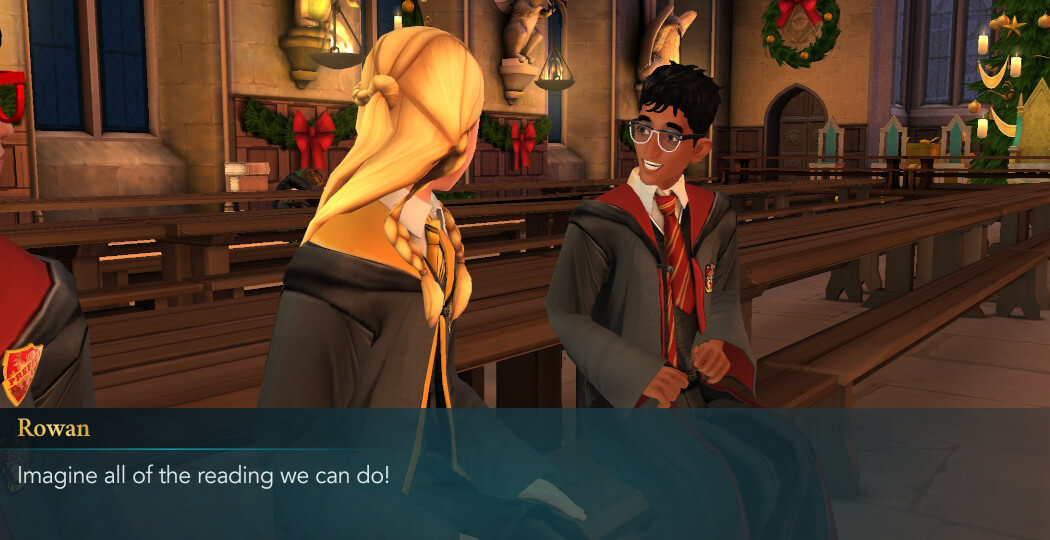 “I don’t know if that will help Dylan feel any better…” Bill admitted, with a semi-confused look.

“Don’t worry about me. I don’t think there’s anything here that could make me miss my mum any less…” I replied. Half of that sentence was a lie. I mean, I did miss my mum, but there was something… actually, someone, that could make me feel better. But she doesn’t seem to care… I couldn’t bear myself to tell them the truth.

“Maybe not, but we can definitely distract you…” Tonks said, cracking a huge smile. “Meet me on the Training Grounds, Dylan. I want to teach you a new spell.”

What could she be up to? What kind of spell does she want to teach me? I guess I could use some distraction from my worries. With so much on my mind, I can’t really afford to let my problems eat me up from the inside.
As I was leaving the Great Hall, I took one last glance in her direction. She was still sitting there… all alone…